Fascinating footnotes to the NASL's weird and wonderful history

"The Detroit Cougars have caused observers to take notice with their brilliant early play," says the newsletter. "Coach Len Julians' lads, who are beginning to shape as one of the league's best teams, registered an impressive four-game sweep over Jamaican opposition in launching their exhibition campaign."

It was March 1968, and the newsletter was published by the North American Soccer League just three weeks prior to the league's inaugural season. It was one of two carefully typed press releases that turned up on the internet at the weekend that make for an absorbing look at the 17-team NASL on the eve of what it hoped would be a breakout year for U.S. soccer.

Merging the previous year's single-season rival leagues -- the United Soccer Association (FIFA-sanctioned, but featuring ghost/guest clubs from around the world playing in U.S. cities) and the National Professional Soccer League ('illegal' in FIFA's eyes, but featuring legitimate U.S. clubs) -- was the only way to survive for these hurried, floundering attempts to form the country's first coast-to-coast pro soccer league. Rather than two competitors battering each other to death, we now had a unified structure on a manic mission to recruit both players and fans.

The newsletters are authored by the league's PR director, Cliff Kachline (later the historian at the National Baseball Hall of Fame), who writes in crisp, informative and lucid sentences. Anyone working in sports media relations would do well to study his style. Readers are spared the banal boosterism, transparent hyperbole and vacuous quotes that teams now use to bulk out their self-promotion. While Kachline's tone is positive, he focuses on names, stats and news.

For example, the Vancouver Royals, coached by Hungarian legend Ferenc Puskas, had lost an exhibition game 4-0 at their Empire Stadium against reigning club world champion Racing Club of Argentina before a crowd of 10,347 on February 25. "Puskas, wanting to test his entire squad," writes Kachline, "put in eight substitutes at halftime. Peter Dinsdale, Bobby Kram and Tomas Krivitz stood out for the Royals." Also impressive on the Royals' four games to date were "the Chinese brother duo of Cheung Chi Doy and Cheung Chi Wai."

The two newsletters are brimming with international transfer news. The Cleveland Stokers, on a training camp in Liverpool, had signed Irish forward Johnny Brookes, who had scored 17 goals in 20 games for Sligo Rovers (unfortunately for the Stokers, he managed just one in 23 games in Cleveland). The Los Angeles Wolves had landed Brazilian striker Carlos Metidieri, a future two-time League MVP and leading scorer with the Rochester Lancers (1971 and 1972). His cousin Gilson had signed for L.A. at the same time.

The New York Generals had secured German striker Dieter Perau, who became the team's top scorer in 1968. His co-players were from Trinidad, Haiti, Hungary, Jamaica, England, Holland and Argentina. Bolivian Romulo Cortez (Stokers) and Gonzalez Camus from Chile (Whips) walked in off the street, invited themselves to take part in practice, and were asked to stay. While neither went on to play in the league -- Cortez played instead for the Washington Darts in the American Soccer League, while Camus disappeared without trace -- their tryouts are testimony to a certain spontaneous charm and sense of adventure that were typical of the NASL. 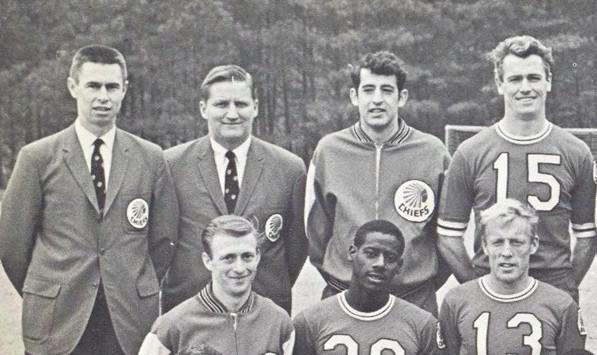 The furious trading reflects what at that time was the unique multi-national (some would say mercenary) makeup of the league, but there was also the nascent concern about the development of home talent. The Toronto Falcons had signed former Scottish international Bill Brown as its goalkeeping coach in order "to work in the area of developing Canadian soccer players," according to Falcons president Joe Peters. Meanwhile, Atlanta had signed "their first two Americans" -- but Canadian Harold Hansen played just one game for the Chiefs. And although former Hartwick star Nick Papadakis played for the Chiefs until 1973, he was in fact "a native of Greece who is now a Canadian citizen."

With future NASL commissioner Phil Woosnam as coach, Atlanta were the perpetual innovators. "In a move aimed at building up interest in outlying areas," the team had announced a series of six intra-squad exhibition games in a series of cities across Georgia and Tennessee. One of those was Knoxville, but I doubt the Chiefs left a lasting impression -- when I appeared on a sports radio show there in 2016 to talk about my NASL book, callers and social media users soon let it be known what they thought of soccer as a topic for discussion.

And the "brilliant" Detroit Cougars mentioned in the opening paragraph? They went on to post the league's second worst record in 1968, and were the first of 12 teams to quit the NASL after just one season. As soccer historian Steve Holroyd points out, "attendance around the league was a dismal 3,400, well short of the 20,000 required to break even". The New York Generals pulled a crowd of almost 37,000 against the Cougars on September 1st, but only because it was part of a double-header with Pelé's Santos playing Benfica. The league survived by a whisker, playing the 1969 and 1970 seasons with only five and six clubs respectively.

It's not just the detail in the newsletters that is striking, but how the issues of 1968 are still the issues of today. How to build a successful team with character, flair and technique, while nurturing North American talent. How to win over local fans while competing against established major league sports and the high-profile international game. How to forge a long term identity for U.S. soccer on the back of a sustainable, attractive league. How to break new markets and attract sponsors, investors and broadcasters.

Progress has not been linear, but the ongoing North American soccer project of course has made significant steps in all the above domains. It's also worth remembering how high the odds were stacked against those pioneers who braved an ambitious project at its birth in a largely disinterested nation. Kachline's breezy newsletters on the cusp of launching what turned out to be one of the most influential leagues in soccer are a fascinating footnote to the NASL's weird and wonderful history.

• With thanks to Robin Glover and J Hutcherson

(Ian Plenderleith is author of The Quiet Fan, Rock n Roll Soccer: The Short Life and Fast Times of the North American Soccer League, For Whom the Ball Rolls, and The Chairman's Daughter