The longest college season ever comes to an end with the Women's College Cup, which begins Thursday in Cary, North Carolina.

For three semifinalists -- Florida State, North Carolina and Virginia -- the season began eight months ago when the ACC gave the green light for men's and women's soccer to conduct a fall season.

For the fourth team at the final four, Santa Clara, the season seemed like it would never get started. It wasn't until Feb. 17 that the Broncos were slated to play their first game -- and it was immediately postponed due to COVID-19 protocols.

"Most teams played in the fall," said longtime Santa Clara coach Jerry Smith on the pre-College Cup media call. "North Carolina played a full schedule, we played zero games in the fall. We tried to get going in January, but Santa Clara County didn’t allow us, so we didn’t get started until February. We lost our entire non-conference schedule. We loaded up our non-conference, but every game was canceled. Our first practice with the majority of our players was on Feb. 10. Two weeks later, we played our first game against Portland."

Smith is amazed the Broncos have made it as far as they have, given the circumstances, and credits his players for their resilience and ability to adapt.

“I’ve never had a team at Santa Clara -- certainly not a final four-caliber team -- hit their stride after seven or even 10 games,” Smith said. “We haven’t hit our stride. We haven’t had the luxury of experimenting with a ton of games. Practices are fine, but they don’t really tell you who you are or what you need to work on. You have to play tough teams and they’ll expose you and then you will figure out what to work on." 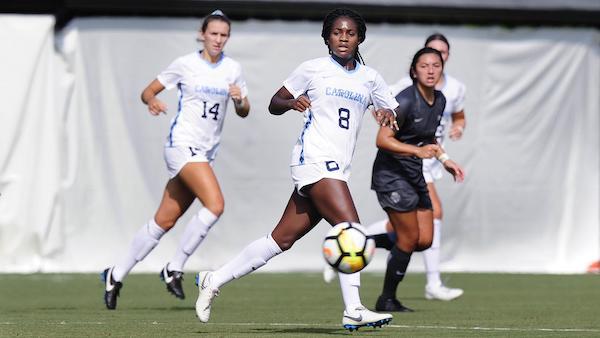 North Carolina, which faces Santa Clara in one semifinal, got to play 12 games in the fall and four more in the spring, but it didn't have all its players.

"They’ve done well," said Carolina coach Anson Dorrance. "[Wubben-Moy] was the Player of the Month for Arsenal. These are great players that we lost."

In January, Emily Fox, who has earned four caps for the USA, was taken by expansion Racing Louisville with the No. 1 pick in the NWSL College Draft. Another starter, Taylor Otto, went to Louisville with the No 11 pick. (A third Carolina player, Brianna Pinto, was picked up Gotham FC with the No. 3 pick, but agreed to stay in Chapel Hill through the spring.)

“Then we lost a player to the lacrosse team who was our starting right back [Julia Dorsey],” Dorrance said. “They are going to win a national championship in lacrosse with her.”

On top of all that, Maycee Bell, the 2019 ACC Freshman of the Year and another player who has spent time with the senior national team, needed ankle surgery and didn't appear in the spring until she played 22 minutes against Texas A&M in the quarterfinals.

“In light of all of the players we’ve lost," Dorrance said, "I’m ecstatic to be in the final four,” Dorrance said. “We’re excited and ready to play. For most of the spring, we’ve had six freshman starting and two sophomores.”

After playing a full conference schedule in the fall, Virginia played four college matches in the spring before the NCAA Tournament began, while Florida State, who had already captured the ACC's automatic bid, didn't play a game.

“You need games," said Virginia coach Steve Swanson. "The games we played were good, but there is nothing like the tournament."

One thing that has helped and will help -- if the Cavaliers get past Florida State on Thursday -- is that the tournament, played entirely in North Carolina, has been spread out with three or four days between matches.

"Instead of the Friday-Sunday format [for the second and third round and semifinals and final]," said Swanson, "we have enough days to recover and prepare for the next one.” 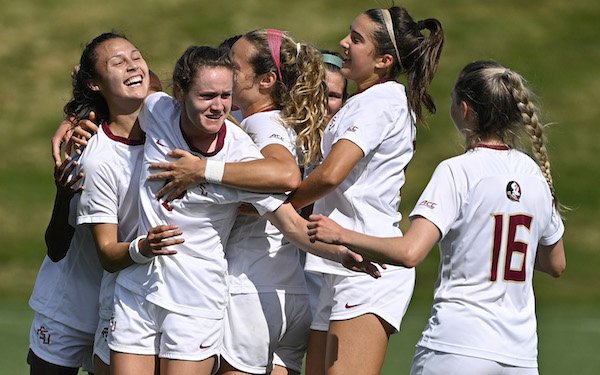 Florida State didn't suffer the kind of losses that UNC experienced over the course of the fall and spring seasons, but it did have to replace ACC Defensive Player of the Year Malia Berkely, who signed with French club Bordeaux after graduating in December.

The Seminoles played only scrimmages and exhibitions in the spring -- they beat the NWSL's Orlando Pride -- but freshman Rachel Flynn did well enough that she earned a starting job in Berkely's place. She played only 265 minutes in the fall but has played all 290 minutes in three NCAA Tournament games, including the quarterfinal match against Duke that went to a shootout.

It's helped that seven starters from the team the lost to UCLA in the 2019 NCAA Tournament quarterfinals are still with the team, and Jaelin Howell and Gabby Carle played in the offseason for the U.S. and Canadian national teams, respectively.

"I’m thankful we have a mature team,” Florida State coach Mark Krikorian said. “This is an older team for us. They are probably more mature than I am. They’ve taken everything in stride.”