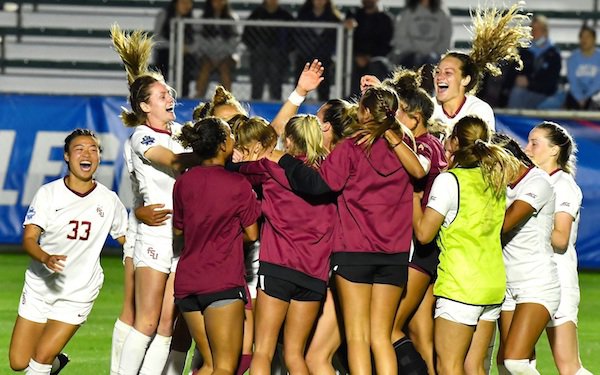 For second straight game, top-seed Florida State needed a shootout to advance in the NCAA Division I Women's Tournament after a scoreless tie against an ACC opponent.

First, it was Duke, which fell, 5-3, in the quarterfinals. In Thursday's semifinals, Virginia created plenty of opportunities for itself but could not score in regulation and overtime and exited with scoring after three rounds in the shootout, 3-0.

Alexa Spaanstra shot over the bar in the first round, and FSU freshman keeper Cristina Roque, a Puerto Rico youth international, stopped the next two shots by Diana Ordonez and Taryn Torres.

The game was nothing like the first meeting between the Seminoles and Cavaliers, a 4-3 victory for visiting Florida State at Kloeckner Stadium in October.

Virginia dominated the first half and had the game's best chance when a shot by Rebecca Jarrett hit the crossbar and ricocheted down, in front of the goal.

Santa Clara and North Carolina are two of the oldest rivals in college soccer, meeting eight times in the third round or later in the NCAA Tournament, but Thursday's meeting in the nightcap was their first since 2004.

The Broncos gave the inexperienced North Carolina backline all kinds of problems en route to a 3-1 win. The game turned in the 51st minute. Carolina got back in the game on star Brianna Pinto's 14th goal of the season, but Santa Clara regained the lead 30 seconds later when a North Carolina defender slipped, allowing Izzy D'Aquila to get off a shot. Carolina keeper Claudia Dickey made the save but Kelsey Turnbow put away the rebound.

D'Aquila scored the first goal and sub Skylar Smith added an insurance goal, her third goal in the postseason.

The three goals were the first goals North Carolina had allowed in almost six months, since the ACC Tournament final against Florida State, also in Cary.