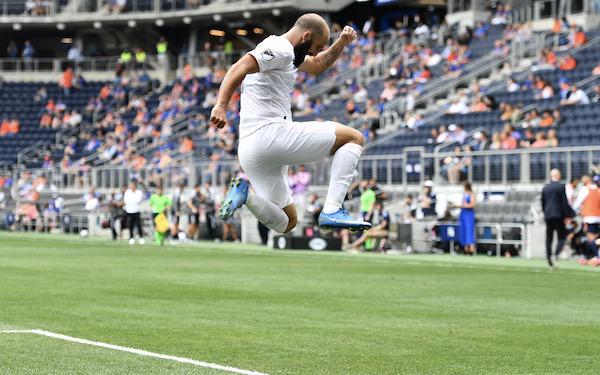 Sunday was supposed to be the day things began to turn around in Cincinnati.

FC Cincinnati was the first team in MLS history to finish last in the overall standings in its first two seasons, and it entered Sunday's match against Inter Miami again in last place.

Despite delays in the approval process and completing construction in the middle of a pandemic, the building of FC Cincinnati's $250 million TQL Stadium, one of the most spectacular stadiums in MLS, went a lot smoother than its roster build.

It went through two head coaches before play began in Year 2, and moves were being still made ahead of Sunday's TQL Stadium opening.

The lack of cohesion showed as FC Cincinnati fell behind, 2-0, at the half. Boosted by a stadium-opening crowd of 6,000 limited by COVID-19 protocols, FC Cincinnati got back in the game on goals by 20-year-old Argentine winger Alvaro Barreal and Cincinnati native Nick Hagglund, who tied the score at 2-2 in the 82nd minute with a header off a corner kick.

But FC Cincinnati's defensive frailties showed themselves again three minutes later when Inter Miami claimed the winner on Gonzalo Higuain's second goal of the game. The counterattack began when Inter Miami won the ball in midfield and Scottish right winger Lewis Morgan found Higuain open in front of the goal.

FC Cincinnati set an MLS record when it allowed 75 goals in its first season. It's already conceded 13 goals in four games, putting it on an early pace to shatter that record. Problem is, its attack has been just as bad.

Barreal's goal broke a string of 12 straight goals FC Cincinnati conceded without scoring, dating back to the season opener at Nashville SC, where it jumped out to a quick 2-0 lead but had to settle for a 2-2 tie.

“I think we had a good attitude and we showed character," said Barreal after Sunday's game. "That was something that we had not done before. And it was a key to being able to find the equalizer. It was unfortunate that we could not hold on to it, but I think that was a key for us.”

At this point, FC Cincinnati will take any small victories it can get.