Ali Riley on an NWSL homecoming after starring in Europe, her eclectic off-field projects, and her Olympic quest with New Zealand

Few NWSL newcomers can appreciate the longevity of the league the way Ali Riley, who played in Women’s Professional Soccer, the women’s soccer league that preceded the NWSL, does now. 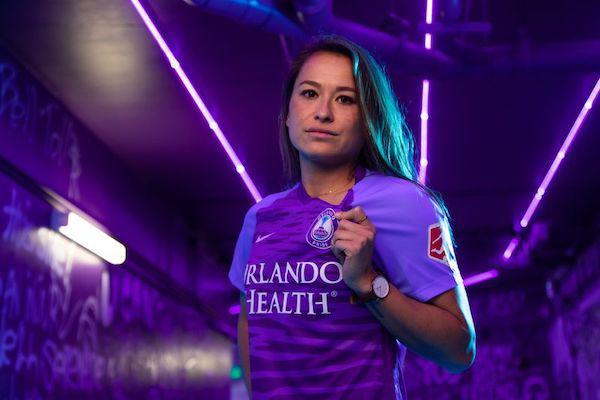 She left the United States upon the demise of the WPS and returns after a decade in Europe to play professionally for the NWSL. Riley transitioned from a successful college career at Stanford to the WPS in 2010, becoming the league Rookie of the Year as her team, FC Gold Pride, won the league. Despite winning another title with the Western New York Flash in 2011, Riley was out of work when the league folded in early 2012.

Going abroad to continue her soccer career, Riley, a skillful and speedy defender, had a successful run in Sweden, eventually winning five titles with FC Rosengard. From there, she continued to keep tabs on the new league in the U.S., wanting to always keep a return home as a possible recourse.

“It’s always been an option,” Riley acknowledged about returning to play club soccer in the country where she was born and raised. “But I was loving where I was playing, so the possibility never solidified.”

In 2018, Riley made the leap from Rosengard, although not immediately to move to the NWSL. She looked to England instead and joined Chelsea. In 2019, she was at Bayern Munich. All along, an NWSL alternative remained viable, specifically that of the Orlando Pride, where the coach saw her as an asset ideal for the squad.

“I started talking to Marc (Skinner) after leaving Rosengard,” explained Riley. “We had a good conversation and I liked the club and the idea of being in Orlando and I’d spoken to Marta.”

A sad event, namely the passing of Kobe Bryant and others in a tragic helicopter crash in early 2020, acted as a spur. “I wanted to be closer to home,” Riley stated. “(Kobe) was a prominent figure to me, growing up. Your childhood hero is gone -- it really put things into perspective for me.”

Due to the pandemic, Riley was eventually loaned out by the Pride to Rosengard, so she didn’t actually see the field for Orlando until 2021.

“That first win was so fantastic,” reminisced Riley about the April 21 victory over the Washington Spirit, during the preseason Challenge Cup. “The fans here are so amazing every game. It’s a thrill seeing how excited they were -- they’re supporting us throughout the whole stadium. You always want to make the community proud.”

With Orlando, Riley could also rekindle the on-field and off-field friendship she has enjoyed over the years with Brazil’s iconic player. “Marta was one of the reasons I wanted to come here, to play with someone who feels like family,” Riley said.

Their connection goes back to the 2010 FC Gold Pride season. “It’s funny thinking about how we became friends,” Riley said. “Everyone was in awe of her, but Marta works so hard and she was never a diva. She does the most amazing things with the ball. That’s why she won best player in the world six times. We connected because we played on the same side of the field. She knew I would do the running and I knew she would do magical things with the ball.”

A willingness to experience another’s culture also served Riley well in bonding with Marta. “She invited me out with her Brazilian friends and I thought, ‘Why not?’ We had caipirinhas and went dancing.”

The friendship was successful on the field as well. Riley ticked off the titles.

“Marta came to Gold Pride and then we won. We went to Buffalo (Western New York Flash) and we won. Then she came to Rosengard and we won. She’s a game-changer, a difference maker. I hope we can find that magic again here. All those years ago, we met in Northern California, and here we are again. We have good chemistry and we have fun.”

The fun is evident on their social media accounts. Marta, Marta’s fiance Toni Pressley and Riley often post pictures and videos. These cover not only soccer (all three play for the Orlando Pride), but also other interests. Riley and Pressley often post cooking segments together and are planning a cookbook. 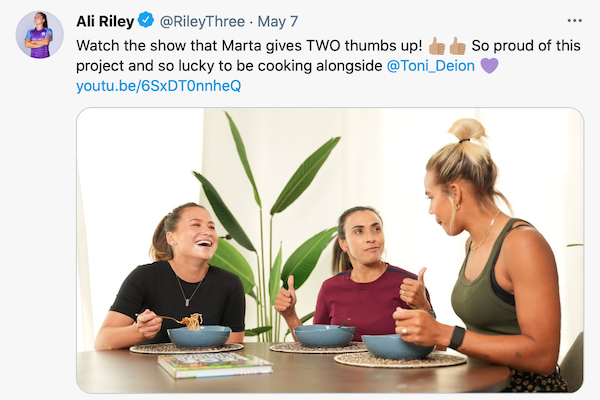 Riley has created content since her Stanford days, hosted the  and recently launched, in partnership with Just Women’s Sports, a video series show, called Off The Ball. Marta was a featured guest on the first show.

“I was so honored she would come on,” said Riley. “It’s a big testament to who she is as a person.”

The show is infused with Riley’s vibrant, slightly goofy energy, providing a behind the scenes look at the lives of professional women athletes. It manages to both humanize and elevate the women in the game, while showing how many have talents, interests, causes and abilities far beyond their skills on the field. “That’s what inspired me to do Off The Ball,” insisted Riley. “I want to inspire other women, like the women here have inspired me. Soccer players are really changing the world with their platform.” 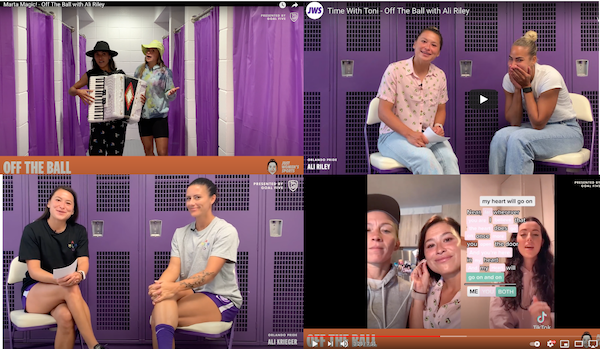 While Riley sees the practical aspect of preparing for a career beyond soccer, she isn’t waiting until then to look to make an impact. “It feels like the perfect time as well, as people are waking up and realizing that women’s sports are interesting; we’re fun and we should be invested. It’s so refreshing and gives me hope to see that there are brands and companies that want to be a part of it.”

Now that the NWSL regular season is getting into gear, every team is looking to make a favorable first impression. Riley, who can play on either the right or left side of the defensive edges of the field, is tasked with turning around a dismal defense for Orlando. The Pride allowed a league-worst 53 goals in 24 games in 2019, which was the last full season of competition. The Orlando squad has given up just four goals in its first five games in 2021. 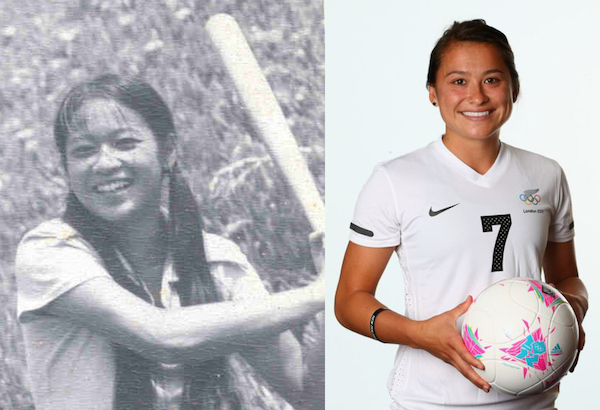 Besides her goals on the field, Riley also intends to be involved as part of the recent wave of athletes speaking out against racial injustice. Her mother, Beverly Fong Lowe, is an American of Chinese descent, making Riley one of only a few NWSL players with Asian heritage. Gruesome attacks on Asian people around the world have made Riley determined to take action and raise awareness of the problem.

“It’s a responsibility to use my platform to do good, to offer support and to be a role model. Speaking on my racial identity, and my experience and giving information, anything I can do to bring awareness, I absolutely want to be doing,” Riley said. “It’s easy to show soccer and fun things, but I want to be completely transparent in facing the racism in this country. The Black Lives Matter movement and the WNBA and so many things opened my eyes. It’s escalated with the language that our former President used and it’s kind of shocked me into action and it’s going to be something I’m now doing for the rest of my life.”

Pointing to the athletes in the WNBA as examples of effective advocacy, Riley took both inspiration and a blueprint of ideas. “I am grateful for allies who know and support gender equality. It helps us learn from each other and fight for change and speak up for racial injustice. It’s not just for a protest. It impacts our lives every day. It has for years and generations. That’s what you’re seeing now with women. We won't be silenced. We have our own platforms and our own voices. It’s given me an example.”

In terms of setting a precedent of her own, one of the most impressive aspects of Riley’s career has been her durability. She has logged over 200 professional games around the world, playing for some of the top teams in Europe and the United States.

“I’ve learned so much over the years about taking care of my body. I was lucky to have two very athletic parents and I was a runner before I could do anything with a ball. I also love playing. Every time I’ve had a setback and a challenge, it’s been worth it to fight to come back.”

For Riley, the game itself is worth it in terms of personal competitive satisfaction, but less so financially. “We’re going to make more money once we stop playing, most of us. There are a lot of reasons to stop playing, but I love it. I’ve learned so much about mental health and training and the psychology aspect. It’s mental, this sport, this career and lifestyle.”

Eligible through her father to represent New Zealand, Riley is one of the most veteran players on the Football Ferns squad and serves as the team’s captain. New Zealand qualified for the Olympics in Tokyo and has been drawn into Group G with Australia, Sweden and the United States. Of note is that current Ferns coach Tom Sermanni is not only a former USA and Australia coach, but also the former coach of the Orlando Pride.

“Australia and the U.S. are teams we’re very familiar with,” Riley stated. “I’ve never played Sweden. It’s such an honor to play in the Olympics. It still feels surreal to play in an international tournament like that right now because of Covid. I don’t think the team will be able to play or even see each other until Tokyo. It’s unusual and unprecedented. But we still have the honor of representing our country. I trust that Tom will prepare us as much as possible for these really hard teams, though each group is hard.”

No matter where she has traveled around the world, Riley has made a habit of defying expectations. She looks to lead the underdog Ferns in a similar manner during the Olympics.

“I try to focus on how amazing it will be for us and the world. I hope it will be a positive experience for everyone. We’re going to do our best.”