U.S. Soccer wiped out its deficit for fiscal year 2021, which it had originally budgeted to be $25.8 million in February 2020 and projected to be almost $44 million as recently as the 2021 National Council Meeting in February.

The preliminary look at the actual numbers for fiscal year 2021, which ended on March 31, indeed showed a small surplus of $618,398, quite a difference from the projection of a $43,980,223 deficit. And also quite a change from fiscal year 2020 when U.S. Soccer showed a record deficit of $28.1 million  in its audited financial statement.

In her presentation on Friday to the board of directors, Pinky Raina, U.S. Soccer's chief financial officer, said forecasting in the middle of the pandemic was challenging and noted many Fortune 500 companies had stopped providing earnings guidance as a result. The change in the federation's financial picture was due to several factors:

-- The bottom line was that federation expenses were down $19.2 million and revenues increased $10.8 million from projections that had been done in August 2020. It should be noted that those projections were done after the shuttering of the Development Academy, which was projected to cost $12 million, and the layoff of about 50 employees.

-- The federation realized significant gains in its investment portfolio as the stock market rebounded from its low at the start of the pandemic. Non-operating revenue climbed to more than $14.9 million, an increase from the $5.6 million originally projected.

All is not rosy, however. Those "timing delays," as Raina called them, on expenses for World Cup men's qualifiers and Olympic women's soccer moved from one fiscal year to the next have driven the projected deficit for fiscal year 2022 to almost $41 million.

"You can take that $17 million 'pressure' from the $41 million deficit coming from FY2021," added Raina. "And the rest, the $23 million-$24 million is consistent with prior year deficits the federation has been running."

Governance task force. U.S. Soccer will hold its first task force meeting on Saturday related to restructuring its governance (membership voting, board and committee compositions)  in order to comply with the new federal law that increases the representation of athletes on national governing bodies from 20 percent to 33.3 percent as part of a broad overhaul of the antiquated Ted Stevens Amateur and Olympic Sports Act.

The task force consists of 33 members, including six members from each of the five councils (Pro, Adult, Youth, Athlete, At-large). It is scheduled to hold four more meetings before a Special National Council Meeting on Oct. 23 to approve changes. The federation faces sanctions if the changes aren't in place by Dec. 31. 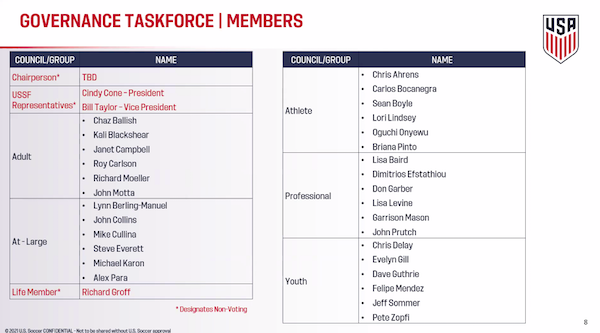 By-law amendments require approval of two-thirds of U.S. Soccer's membership so it was at an impasse earlier in the year when proposed amendments were introduced. They included:

-- An increase of the board's structure from 15 to 18 voting directors and three to six athlete representatives.
-- The elimination of Pro Council representation as part of a reduction of the board size to 12 directors (with four athletes).
-- The change in the definition of the “athlete" to extend beyond the current definition of “athlete" as a member of a national team.

The undercurrent of discord pits the Athlete and Pro councils (who together would control a majority of the votes if the Athletes' share of the votes increased to 33.3 percent and the proportional shares of three other large councils stayed equal at around 20 percent) against the Adult and Youth councils.

Next broadcast deal. Wilson was asked on the media call about the status of negotiations on U.S. Soccer's media rights for 2023 and subsequent years. The federation's current deal with ESPN, Fox and Univision expires at the end of 2022 and is bundled with the eight-year deal MLS reached with the same broadcasters in 2014.

"Those deals are in a negotiating window with the existing partners," he said. "We are still working through that process."

Asked specifically whether the federation would negotiate a new deal in conjunction with MLS or on its own, Wilson responded, "We're finalizing that process, which way we are going to go forward."