Jerry Smith  says there were “100 valid reasons” for his Santa Clara University women’s soccer team to not play well this year. 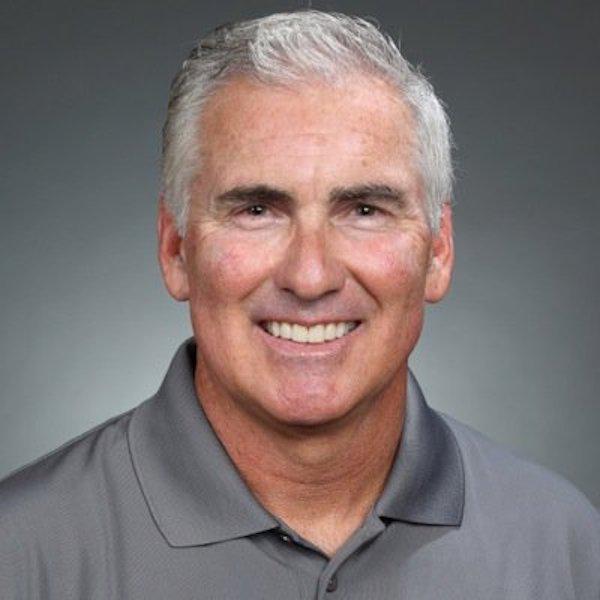 There was no fall season. Long months of training were interrupted by wildfires, while the pall of the pandemic hung over the Northern California campus. The strange spring season started late, was interrupted by cancellations, and ended after only seven regular-season matches.

But the Broncos battled their way to the NCAA College Cup finals. After Smith delivered “the worst halftime speech” of his coaching career, 11th-seeded Santa Clara went down 1-0 to top-ranked Florida State University. A goal six minutes from time drew them level.

The Seminoles had won their two previous matches on penalty kicks, not missing a shot. This time, Santa Clara pulled out a 4-1 PK victory. It was their second national championship.

The first came in 2001. In the 20 years since, Smith says, “I’ve probably had 15 teams better than this (current) one.” He claims no credit for coaching them to the title. Rather, the women’s “grit and resilience” in the face of unprecedented adversity drove them to the top. Challenges like COVID “can bring you together or drive you apart,” the coach – now in his 34th year at the helm – says. “They gutted it out.”

Those qualities can be trained and taught in a competitive, challenging training environment, Smith believes. But only to a point. “The players themselves have to learn how to make one plus one equal three.”

The improbable route to the championship match in Cary, North Carolina, began with no matches at all in the spring or fall of 2020. Last autumn, Smith recalls, “the whole state was no fire. The air was so smoky, sometimes we couldn’t practice. We were all miserable. We hated each other.” 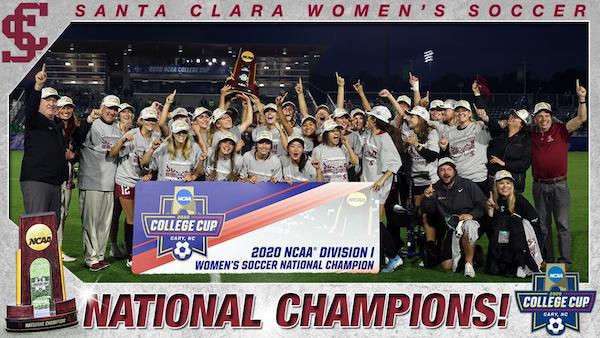 Figuring there would be no spring season, he had knee replacement surgery in December. In mid-January, he learned that training could resume in February. Suddenly, there were only a few days to prepare for the opening match.

The third match was at Brigham Young University. The Cougars were the unanimous pick to win the West Coast Conference. Santa Clara came from behind, “dodged a bullet,” and won. It was Smith’s 500th career win, a mark previously achieved only by Anson Dorrance and Len Tsantiris. On the plane home, a freshman asked Smith, “Are we good?” “I think so,” he replied.

Pepperdine is also a tough place to play. This time Kelsey Turnbow scored the gamewinner in a wild, 4-3 overtime affair. At the airport, another player asked the coach, “Are we good?” His answer was the same.

A four-week layoff loomed between the final regular-season match and the first College Cup. Traditionally, the training session after the NCAA tournament selection announcement is light and fun. This one was different. Captain and four-year starter Sofia Jones tore her Achilles tendon while backpedaling. “She was a great voice. I’d rather lose a talented kid than a leader,” Smith says.

The reshuffled lineup – including new center back Eden White, who had not started all year, and Makoto Nezu, with just one start – helped the Broncos beat Ohio State (4-1), Arkansas (2-0) and Clemson (1-0).

That brought “the ultimate challenge”: a semifinal against legendary North Carolina. Smith has tremendous respect for 22-time national champion coach Dorrance. Several Tar Heels signed pro contracts prior to the spring season. “I don’t know anyone else who could replace them the way Anson did,” Smith says.

But he’s had great success against UNC over the years. Once again, Santa Clara prevailed, 3-1. As Smith and his staff prepared for the final, four days later, they figured Florida State would not change what had brought them so far.

“We got that wrong,” Smith admits. “We didn’t expect a sweeper and two markers. That caught us off guard. The game plan we gave our team so confidently was totally wrong.”

Fortunately, he says, his players relied on the principles of play they’d been taught. That, plus their instincts and trust in their teammates, helped keep the match scoreless by halftime. Which is when Smith delivered that “worst” speech of his coaching career. He presented a tactical change he did not fully believe in. “I wasn’t passionate or convincing. Everyone looked at me very strangely,” he says.

Quickly, he and his staff devised a different approach. An assistant conveyed the new plan to the team as it huddled, seconds before taking the field. “Now they were twice as confused,” Smith says. “It was a complete mess.”

But the Broncos fought. Down by a goal and pressuring, Turnbow jumped on a bad pass. Her finish was “opportunistic, posed, skillful, composed and clinical.”

The Seminoles – expecting that Santa Clara knew which way their kickers would go, after two straight PK wins – changed things around.

“Little did they know I don’t value that scouting information,” he says. “We don’t give it to our players. I took penalties myself. I was happy just to hit it.” That lucky break – in a year without many – helped the Broncos prevail.

Reflecting on his second title in eight College Cup appearances, Smith says, “I’ve had five or six teams I thought would win it. In 1999, we were the best in the country. In 1996, we played it on our campus.

“But we didn’t win those. What our players dealt with this year – they had 100 valid reasons not to play, not to play well, to settle or give in. They didn’t. To win in a year like this is almost unimaginable.”

He adds one more obstacle they overcame. “I pushed them too hard in the fall. There were no classes – just soccer.” When the team got back together in January, he decided to “read the room. We were easy, gentle. We put no expectations on them. But along the way, they realized they had something. I have such pride in my women. They deserve all the credit. I’m so dissatisfied with my coaching this year.”

He’ll have a chance to do things differently next season. In keeping with this unique year, it begins in just three months.

college women
2 comments about "Santa Clara's Jerry Smith on his enormous pride in his national champions and how he almost messed things up".
Read more comments >
Next story loading