Weekend Focus: DeAndre Yedlin on his return to USMNT, his advice for his young teammates and life in Turkey 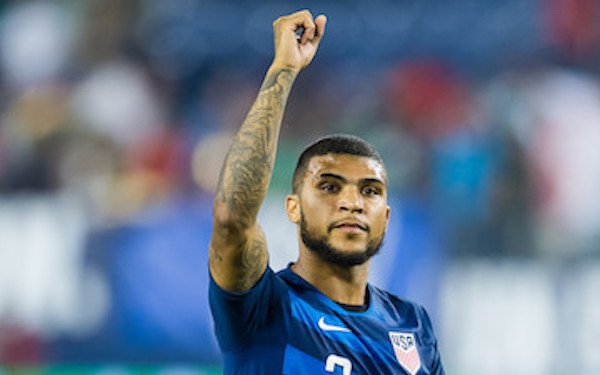 When looking through Gregg Berhalter’s roster for the Concacaf Nations League, you see younger but familiar faces in Gio Reyna and Christian Pulisic. You also see veterans like John Brooks, Tim Ream, and Matt Miazga, who have been getting called up consistently in recent years. Then you also have players like DeAndre Yedlin, who is a veteran but who is back for the first time in over 18 months.

Yedlin, 27, is the most capped player on the Nations League roster and, along with John Brooks, is one of just two players who has represented the country at a World Cup. The Seattle native, however, had fallen out of favor the past two years – primarily for two reasons.

First, he had been struggling for playing time at Newcastle United. Second, the U.S. team had become dramatically more competitive at his right back position with Sergino Dest both committing to the U.S. program and earning a starting spot at Ajax followed by Barcelona. Reggie Cannon had also put in good performances while starting regularly at FC Dallas followed by Boavista. Finally, Bryan Reynolds had also showed a lot of promise, making his lucrative move from FC Dallas to Roma over the winter.

Just as Yedlin looked like he was fading away from the team, he hit a home run for a transfer, moving from Newcastle to Galatasaray, one of the historically powerful clubs in Turkey’s Super Lig. He seemingly walked into the team’s starting lineup, fought through an injury, and returned to its title run down the stretch, where Galatasaray won its final six but finished second only due to a narrow difference in the goal differential tiebreaker.

Now heading into next season, Yedlin will be starting for a big club that will participate in Champions League qualifiers. That might move him past Cannon and Reynolds as a backup to Dest. It also might see Yedlin starting if Dest plays left back.

For Yedlin, it’s been quite a turnaround, and he is thrilled to be back.

“It's been great,” Yedlin said of his move. “That's obviously why we are in this profession - for playing time. When you're not playing, it can be a bit of a struggle. Being able to get back playing, getting my form back, getting my confidence back and be back as a part of this group has been huge. It is great to be here with these guys and seeing the talent that is here, the ages of these players, is incredible. I think we are entering into a golden era for U.S. Soccer, so it's really exciting to be involved in it - and watching it. It is great to see the steps that are being made. You have to give kudos to Gregg and the staff for putting this team together because they've done a great job.”

For Yedlin, he now finds himself going from one of the younger players on the team to one of the eldest – seemingly with no period in between. When the U.S. team failed to qualify for the 2018 World Cup, the team went through a period of heavy roster turnover under interim coach Dave Sarachan and followed by Berhalter. Most of the veterans at that point stopped receiving regular call-ups and a younger generation quickly was ushered in.

During that heavy period of turnover, most of the veteran players were phased out. Yedlin, however, remained in the mix. The concept of being a “leader” or a “veteran” has not come naturally to Yedlin in his past, but it is something he is adjusting to.

“It's an interesting role – obviously, it’s to be a leader,” Yedlin explained. “But you also have to look at the fact that you have guys in here who are young guys but who are also leaders as well. They’ve been in this system a lot and through the ranks a lot. With this group there is just a lot of natural leaders. Being a leader isn’t my natural skill but you have so many natural leaders here with the younger guys but with me a vet, I kind of push myself into that role.”

One of the situations he has been giving advice is about dealing with hype. While several of the young players on the roster now have Champions League experience and are used to deal with pressure, there are still several young players who are not. In addition to the Nations League roster, there are players such as Matthew Hoppe, David Ochoa and Justin Che who are new to the professional game and are training with the team for Sunday’s friendly against Switzerland. All are hoping for their first cap on Sunday.

For these types of players, Yedlin has advice to offer and in 2014 was in a similar situation, being fast tracked into the team after a strong first season with Seattle, at an important period of time during the run-up to the World Cup.

“First thing is that they they are on very good teams and in good professional environments,” Yedlin said. “The second thing is just to keep your head down. Obviously, being young, in our country we have a tendency to really hype up younger players because we’re excited about it, as we should be. But sometimes that can be a bit too much and can put too much pressure on these players with too many expectations on them... [They should] put their heads down and block the noise out, that’s what I tried to do. The last thing, is just to have fun with it. The fact you are here says a lot and you’re here for a reason and that it says a lot about you.”

Following the Nations League and the Costa Rica friendly afterward, Yedlin will take a break before returning to Turkey to prepare for an important season at Galatasaray.

Yedlin has enjoyed his time with Galatasaray and life in Turkey. The Super Lig is typically a bit different than most in Europe. The rosters tend to have the oldest average ages and the pressure on the big Istanbul clubs is always immense. Galatasaray is expected to be among the favorites to win the Super Lig and qualifying for the group stages of the Champions League is also a huge priority.

“There were big cultural things,” Yedlin said of his time in Turkey so far. “I really enjoyed that aspect of it. It's a different part of the world. That is one of the things that drove me to leave England, just to see a different culture and get out of my comfort zone again. As far as football-wise, I was actually very surprised by Turkey. You have some very good players, very technical players, very physical. The one thing that separates the Premier League, and this is for many other leagues, is the end quality. You make a mistake and you are for sure to get punished. Not just with Turkey, but other leagues as well, sometimes the end quality isn't as good. But it is a great league, a competitive league and I've had a great experience so far.”