As the celebrations for Marshall University’s NCAA Division I men’s national title continued, the Thundering Herd was saluted by Governor Jim Justice and Senator Joe Manchin.

“People in this state are so excited for us,” says head coach Chris Grassie. “It’s the first Division I team national championship for any college in West Virginia. I didn’t realize how big that is. I still haven’t wrapped my head around it.” 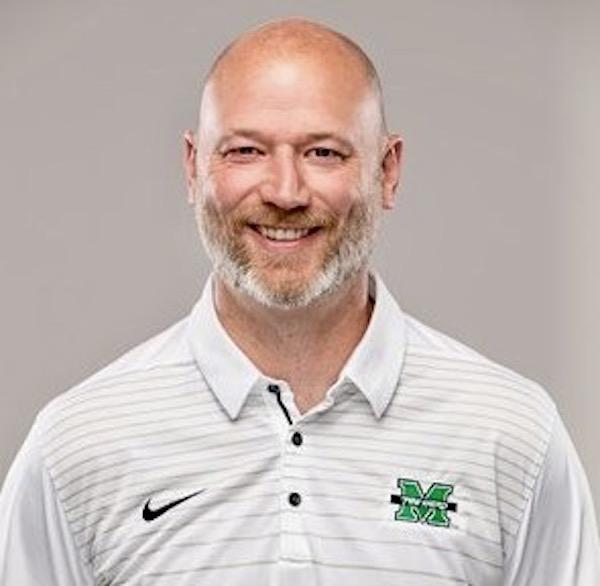 Marshall is the first unseeded team to win the men’s D-I crown since 2006. They did it just a season after notching their first-ever NCAA tournament win.

When new coaches are hired, they often talk about a four-year plan. After moving 50 miles to Huntington from the University of Charleston, Grassie figured he’d need five years. He’d made a mistake his first year at Charleston – he imposed his attack-freely-and-with-excitement on a team that had been defense-oriented – and realized he needed more patience this time.

Grassie hoped that by year three his system – and the players he recruited – would show results. The fourth year’s goal was to win the conference; the fifth was to take the national prize.

Grassie is an international too: from Newcastle upon Tyne, England. He was an all-conference pick at Alderson Broaddus University, in Philippi, West Virginia.

Quarantine restrictions kept some players home in the fall. Returning to campus was not easy. A few took circuitous routes. All had to quarantine upon arrival. 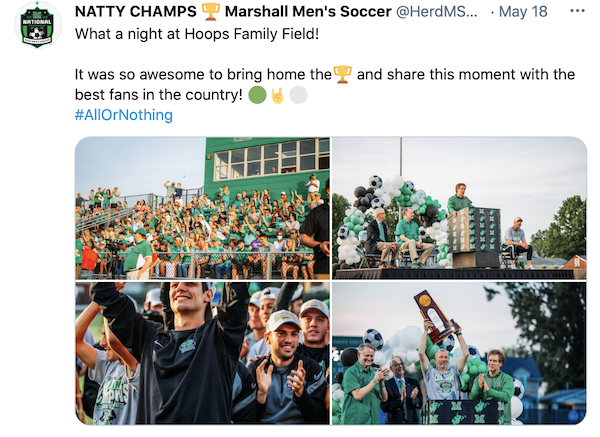 It’s not always easy to get North Americans, South Americans, Europeans and Africans on the same soccer page. But Grassie says, “The love they have for each other, the energy they give each other, their positive, solution-oriented attitude, their hunger, their desire, their ability to be super-competitive without creating negative waves – it’s great.”

His job was to create “a home away from home” for everyone. Then it was up to the “cultural architects” on the team to lead their teammates.

Grassie preached four “championship behaviors” to his team: humility (“are you coachable?”); intensity (“do you work to your maximum effort?”), trust (“can you walk your teammate’s girlfriend home without him worrying?”) and grit (“can you do those three things over your four-year college career?”).

Still, the fall was a struggle. Grassie agreed with his school and Conference USA decision not to play in the fall. By January, though, he was ready to get back on the field. With robust testing and other COVID procedures in place, the team gathered from across the globe. There were blips – when players received their second vaccine doses and felt sick, they missed a week of training – but the end result was worth it.

Finally, players could have team meetings indoors, and roommates on road trips. They sang on bus rides. All those “normal” activities lifted spirits, Grassie says.

From that point on, it was a race to the College Cup. The coach likens it to “running across a frozen lake. It’s not easy. But once you get going, you can’t stop.”

The momentum swept up the campus, as well as the team. Fans drove five-and-a-half hours to Cary, North Carolina to cheer the Herd. Those without tickets camped out in the parking lot. Back home in Huntington, streets closed for impromptu watch parties.

Marshall did not disappoint. Jamil Roberts’ dramatic 98th-minute golden goal set off wild celebrations in North Carolina and West Virginia. When the team returned home, the state police shut down the highway. Days later, West Virginians – including the governor, senator and rivals at WVU – were still smiling.

“We just did our thing,” Grassie says. “We scouted, prepared, trained and rested. For myself as a coach, to see our players fight so hard, that was my reward. Honestly, I wasn’t prepared for all the adulation we got.”

Marshall’s national championship capped an improbable college season. Now the next one looms. After just nine weeks off, the Herd will gather to defend its title.

Grassie is ready. He loses only one starter. Half a dozen freshmen will compete for spots. His goal for the fifth year of his five-year plan is to repeat as national champions. And the coach who originally signed for three years does not have to worry about job security. Days after winning the College Cup, Marshall’s board of governors rewarded him with a new five-year contract.