Hector and Eels expose serial banality of the obligatory interview

A few years ago I was at the 9:30 Club in Washington, D.C., to see the LA band Eels. Before they came on stage we were shown video clips of the band's front man Marc Oliver Everett, one of which was a TV interview from the archives. The reporter asked Everett where he found the inspiration for his songs. "Everywhere," replied the singer. "In fact I'm writing a song right now." Really? said the interviewer. What's it called? "Inane interview," deadpanned Everett, and the entire night club roared its appreciation.

I'm reminded of Everett almost every time I watch a post-game interview. The ratio of life hours wasted to worthwhile insight has been declared by the American Mathematical Society as immeasurable -- there is no number small enough to represent 'worthwhile insight.' Still, broadcasters have paid for the right to talk to players who have just finished a physically and mentally taxing job, and they have air time to fill. With air. Here's what we learn. Sportsperson has won: they are happy. Also, it was a team effort and our fans are magnificent (as they always are after a win). Sportsperson has lost: they are disappointed, but hope to do better next time. Sorry to the fans we let down.

Being good sports, most players wipe off their sweat, don a smile or a grimace, and endure the contractual obligation to face the mind-numbing queries of the reporter. Sometimes, though, the cameras catch the wrong player at the wrong moment, and the result is a glorious slap in the face to this whole vacuous charade. Step forward the captain of FC Cologne, former German international Jonas Hector. 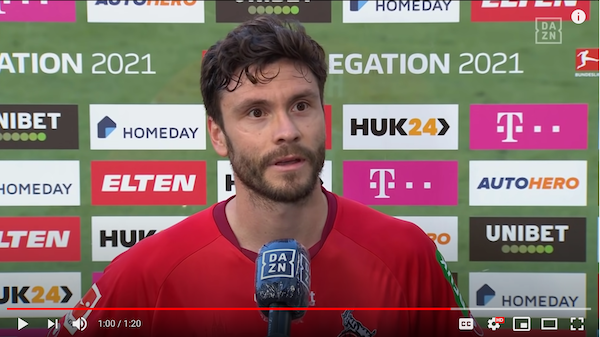 On Wednesday last week, Hector came off the field fuming after his side's 0-1 home defeat to Holstein Kiel in the Bundesliga relegation playoff game. As Hector let referee Felix Zwayer know what he thought of his performance (kicker magazine gave Zwayer its lowest rating, a 6), the commentators on streaming service DAZN talked excitedly about how they couldn't wait to get Hector in front of the mic. They soon did, but then they got a little more than they bargained for.

First, they invited Hector to let off some steam. Why should I do that, asked Cologne's baffled and clearly aggrieved captain? OK then, let's try a question, said the interviewer. Was this a just result? Hector shrugged. From his point of view a draw would have been fairer, "but the result is that we lost 1-0." What does it look like inside you, asked the reporter. How empty are you feeling? At this point, Hector snapped back: "Always these shit questions. Empty, I mean, I know it's your job to ask stupid questions, and that's something you do really well. The thing is, I'm not empty, I just played 90 minutes, I'm disappointed we lost, and on Saturday [in the return game] we've got the chance to do better and turn it around.”*

"One more stupid question," said the reporter, now somewhat on the defensive. "How important will the mental work be for Saturday, to tell yourselves that it's only halftime, we can still do this?" Hector gave up at this point. "At the moment," he replied, "I just don't have an answer to that question." The reporter then released him back into the free world, no doubt to the relief of both parties.

Kicker labeled Hector's conduct as "unprofessional," but then the magazine is also DAZN's media partner. The daily Süddeutsche Zeitung implied that Hector should have been angrier at his own performance than at the blameless reporter. It seems odd, however, that soccer journalists -- many of whom have never played soccer at pro or even amateur level -- can base entire careers on criticizing players' performances from up in the stands, yet when a player bridles at their utterly banal or senseless questions, they are upbraided for breaching the established conventions of the industry.

For those of us watching at home, though, Hector's performance garnered the loudest cheer of the day. He was merely saying what everyone else thinks when they watch the nonsensical postgame blabathon: your questions are stupid. So stupid that, in the end, I can not even summon the will to answer one more.

Hector probably was angry at his own performance, and he took it out both on the referee and DAZN. Maybe if he'd had, say, 10 or 15 minutes to calm down and reflect on the game, he'd have given the reporter a coherent interview. In that time, the reporter could have considered some better questions based on what had actually happened out on the field, rather than trying to cash in on Hector's obvious frustration. But when clueless hacks rush for the emotional quote too soon after the final whistle, the result is almost always: inane interview. Props to Jonas Hector and Marc Oliver Everett for refusing to play along.

*Cologne 'did the mental work' and the physical work too and won the return game in Kiel 5-1, meaning they will continue to play in the Bundesliga next season. Hector scored the go-ahead goal in the third minute.