Pep Guardiola-- the world’s greatest soccer coach, it seems -- had assured us: this Champions League final, his very own Manchester City against Chelsea, this would be a great “advert for football.” 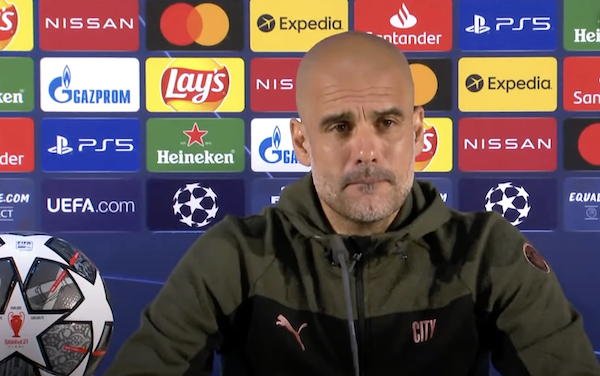 That was a pretty silly thing to say for one as steeped in soccer knowledge as Pep. The record of soccer’s climactic games in recent years speaks loudly, starkly -- and surely unmistakably: such games are usually letdowns, and stand a pretty good chance of being downright awful.

Sure, Chelsea can feel pretty good about its win, silencing all the talk (and how increasingly boring that has become) of Pep’s brilliance. But just how good did Chelsea need to be to see off this pathetically incoherent Man City?

Actually, one goal was enough -- one very good goal from Kai Havertz, following a glorious assist from Mason Mount. Man City’s futile attempts to reply added up to just one shot on goal. Just one.

What a farce. What a fraud, come to that. Two of soccer’s super whizz-bang coaches, a host of the world’s best -- and highest-paid -- players, a gala occasion ... and we get crap.

A huge part of the blame for this debacle lies with Pep Guardiola. His genius led him to field a lineup and a formation that defied explanation. You’ll have read plenty about that, so I’ll not bore you (and myself) with the details.

Well, just one detail. Among his glittering roster, Guardiola had Sergio Aguero, one of the greatest and most reliable goalscorers in the history of the sport. Aguero sat on the bench for most of the game before getting on the field at the 77th minute.

The few minutes he played -- the few minutes he was grudgingly allowed to play by Guardiola -- were Aguero’s farewell to Man City after a dazzling 10-year career with the club. He is now joining Barcelona, where -- whatever the treatment he gets -- it cannot possibly be worse than the neglect showered on him this past season by Guardiola.

I’ve followed that neglect closely -- as I’ve followed Aguero’s entire career, since his 2003 debut as a 15-year-old with Argentina’s Independiente club. Guardiola’s behavior has been, to my mind, unforgivable. Aguero became a regular figure on the bench, a lonely figure, social distancing ensured that. But the bigger distancing came from Guardiola who found it difficult to even discuss the player. Questions from journalists wanting to know when Aguero was going to return to the team were met with cold, curt, impatient answers -- it was as though Guardiola already considered him an ex-player.

I found Guardiola’s stance inhumane. It could -- possibly -- be explained (but never excused) as a brutal necessity for the team’s success. The team was winning -- was running away with the Premier League --without Aguero and his goals.

Guardiola had his new system in place, and there was simply no place in it for Aguero. Guardiola, it appears, has discovered a way to win that must not be modified. The system is all. So Aguero must be sacrificed.

A theory that makes a certain sense, and that satisfies my dim view of Guardiola’s conduct. There’s only one problem with it. It doesn’t stand up. Because Guardiola, for this crucial game, did modify his system. Big time. He was accused of “tinkering” with it, but his changes went much deeper than trivial adjustments. To leave out captain Fernandinho and Rodri was a seismic change. Both players can be classified as holding midfielders; their absence meant City were playing without any midfield defense.

How brilliant did Chelsea have to be to exploit that? And of course such a fundamental upheaval had other effects. Midfield was now the province of three attacking players. Ahead of them were three ... er, well, what can one call them? Among them was Raheem Sterling, the only genuine forward to be seen.

As to who was playing where and doing what, I’m not up to that sort of tactical cleverness. Does it matter, anyway? City looked awful and lost the game 0-1, registering only one shot on goal in 97 minutes.

In fact, Man City and Chelsea combined for a massive total of three shots on goal in the entire game -- one shot on target every half hour. Some advert, Pep.

I’ll take a closer look at one incident. One that must surely have greatly peeved Man City fans: Antonio Rudiger’s 56th minute clash with Man City captain Kevin De Bruyne. Viewed live, this came over to me as a sure-fire red card. But Spanish referee Antonio Mateu Lahoz decided a yellow-card caution was enough. So, even more viewing of the clash. It didn’t get any better.

(A curious aside: for this enormously important moment of the game, we were given just three replays: one apparently from a high-flying helicopter which was of little help, another from an angle so low that the crucial head area was almost out of the picture, and finally one that did allow us to take measure of Rudiger’s action. We saw those replays just once. They were not repeated. Why not, you may wonder.)

It was Rudiger’s shoulder that did the damage. His action looked cruder and cruder as I replayed the heck out of the incident, until I began to be certain it was deliberate.

But intent is not mentioned in the rules. The main concern here is whether Rudiger’s action endangered De Bruyne’s safety. We know now that it clearly did -- De Bruyne’s injuries included a broken nose and an “orbital fracture of the left eye socket.”

Referee Mateu Lahoz would not have known the medical details. But he must surely have been aware of the ferocity of Rudiger’s crunching body block.

So how come he didn’t show the red? Because this was the UCL Final. No referee will feel inclined to “ruin” a grand final by reducing it to an 11 vs. 10 game. This is a problem that the sport of soccer has, one that has never been faced up to: of finding a way to punish a bad foul while allowing the offending team to continue with 11 men. It is a problem that will inevitably influence a referee’s call -- particularly in showcase games.

Maybe, then, a referee’s decision ensured Chelsea’s win? I don’t really think so. The way Man City was playing, they’d have found it difficult to beat an 8-man Chelsea.

For me, the biggest question has to be leveled at Guardiola: why no Aguero? To claim an attacking approach is fine, but to then leave one of the sport’s greatest goalscorers on the bench is a glaring contradiction ... made much, much more nonsensical by Guardiola’s refusal to use Aguero as a sub until the 77th minute.

Before the game, Guardiola had said “If Aguero is going to help us score goals he is going to play,” then adding what almost sounded like a threat, “But it's the final of the Champions League.”

Man City labored on for 77 sterile minutes (1 shot on goal!) before Guardiola -- “the defining tactical brain of his age” as The Observer called him -- would admit that a goal from Aguero would be a good idea. It didn’t happen.

The game was a sorry occasion for all the Man City players, but an intensely sad one for Aguero: the end of his 10 years with the club. His chance to show what he can do, what he is supremely good at, was squelched by Guardiola’s faith in a system that so obviously wasn’t working.

I’ll confess, I have no interest whatever in Guardiola’s systems -- or any other coach’s for that matter. A pox on all of them. When a system is held in such esteem that it can banish a great player like Aguero, I have no hesitation in damning that system and the coach who persists with it.

The final word on this woeful occasion goes to England’s Michael Owen, a pretty good goalscorer in his playing days. This was Owen’s tribute to Aguero: “One of the Premier League's all-time greats, Sergio Aguero is set to leave Man City at the end of the season. What a player. He's been an absolute joy to watch.”

I did believe, once, in Guardiola as a great coach -- not a genius, but a man who revered the game and made the right decisions. I don’t believe that any more. At the moment I am appalled at his treatment of Aguero -- as a world-class player, but more so as a human being who deserved something better than a measly 20 minutes at the end of a tawdry game, to mark his departure from Man City.

Aguero moves on to Barcelona and, presumably, to Lionel Messi. There is promise there. Buena suerte! Sergio.