The USA closed out the June window with its third win in seven days over Concacaf opposition. The 4-0 victory over Costa Rica was, by a wide margin, the easiest of the three games. The Ticos never showed any interest in playing, falling behind early and never threatening the USA, which started just two players from the team that started three days earlier in the Concacaf Nations League final against Mexico. 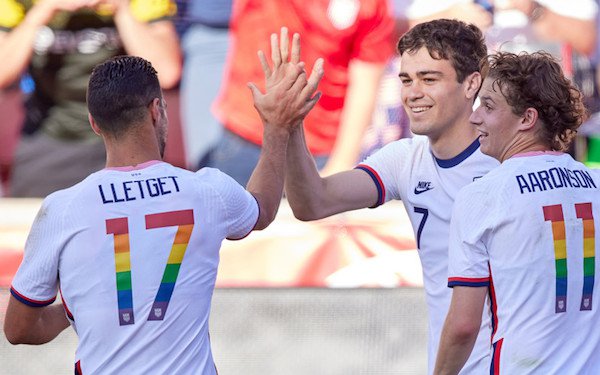 Ethan Horvath, the hero of Sunday's overtime win, had little to do on his 26th birthday. He saved a couple of harmless shots and dealt confidently with one dangerous free-kick situation.

Mark McKenzie returned to the starting lineup for the fourth straight game and had his best match in a U.S. uniform in his 45-minute shift. He won every one-on-one duel except one with Joel Campbell in the 37th minute when he slipped and took a yellow card instead of letting Campbell advance into the penalty area. McKenzie's long through ball split the Costa Rica defense to put Daryl Dike through for his first international goal shortly before halftime. Reggie Cannon also scored his first U.S. goal, displaying all the skills of a seasoned striker, racing at the Costa Rica backline before pausing and cutting to his left, where he fired a left-footed shot inside the near post in the 52nd minute. Tim Ream, who also started against Mexico, and Antonee Robinson faced little danger on the left side. Robinson was involved in the buildup for the first goal but otherwise had a quiet game in attack.

Tyler Adams' insertion in the lineup for his first U.S. start since November was a key factor in the team's midfield dominance. He didn't make any big plays but he didn't have to. His calm demeanor gave the USA time to get organized and attack through a variety of channels. After he missed the Concacaf Champions League, the spotlight was on Yunus Musah, and he showed off his versatility and range. Sebastian Lletget started the attack that led to Aaronson's opening goal.

Brenden Aaronson and Daryl Dike both have made enormous strides since moving to Europe in January, and they were both rewarded with goals against Costa Rica. Aaronson was quick to pounce on a loose ball to open the scoring in the 8th minute. He had the move of the game late in the first half when he danced past several Tico defenders before laying the ball off to Musah, who shot wide. Dike raced on to McKenzie's through ball and gave Costa Rica keeper Leonel Moreira no chance on his breakaway in the 42nd minute. Moreira robbed Tim Weah in the 14th minute. Otherwise, Weah covered an enormous amount of ground on the right side, which he had to himself.

On his first touch of the ball, Gio Reyna was chopped down by Keysher Fuller in the penalty area for a spot kick he converted. The only down note of the evening came late in the game when Jordan Siebatcheu suffered an apparent knee injury. He tried to shake it off but had to leave the game minutes later.

TRIVIA: The four goals the USA scored against Costa Rica marked only the second time in 40 meetings it scored as many as four goals against the Ticos. It also won 4-0 in their group-stage match at the 2016 Copa Centenario.