The USA needed a 76th-minute goal from Sam Mewis to beat Portugal, 1-0, in a very disappointing start to the WNT Summer Series even if the match offered a glimpse of how opponents might defend at the Olympics. With close to a first-choice lineup, the USA was in almost total control of the match but struggled to create decent chances until late in the match. And when the USA found openings, more often than not it shot wildly. 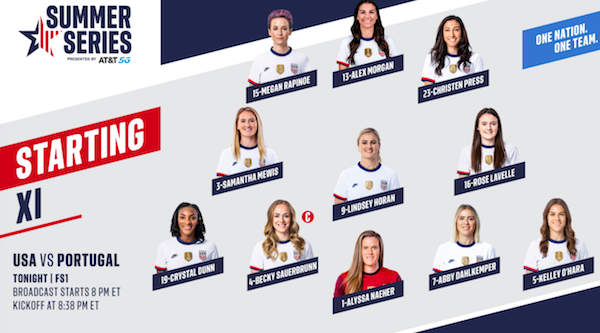 As so often is the case, Alyssa Naeher had little to do, just dealing with a couple of back-passes and one ball that passed for a shot.

Abby Dahlkemper and Becky Sauerbrunn shut down Portugal the few times it ventured into the U.S. half. The outside backs Kelley O'Hara and Crystal Dunn rarely got into dangerous attacking positions that might have forced Portugal out of its compact defense, and their service simply wasn't good enough to trouble the young Portuguese.

Until the Portuguese tired, Sam Mewis and Rose Lavelle were ineffective. Mewis was presented with chance after chance and was the player most guilty of poor shooting. But she was standing on the doorstep, in a position where it's impossible to miss, to head Christen Press's corner kick into the goal. The match screamed for Lavelle to go right at the Portugal goal as she finally did in the 79th minute when Portugal keeper Ines Pereira saved from close range. With Julie Ertz sidelined, Lindsey Horan was tasked with the job of anchoring the midfield. She won plenty of balls but was playing too deep to create her usual havoc. She had the best free kick of the game, forcing a diving save from the excellent Pereira before Carli Lloyd was called for offside.

Alex Morgan, who is leading the NWSL in scoring, was invisible in the first half, getting just 10 touches on the ball. In the second half, she had two golden opportunities in front of goal that she failed to put on target. The service from Megan Rapinoe on corner kicks was poor most of the game, and she rarely got in position to impact the game from the run of play. In the first half, Christen Press had the USA's best chance, forcing Pereira to make a kick-save on her volley. She did what Rapinoe couldn't and put her first corner kick after Rapinoe's exit right on goal for Mewis to turn into the goal for the winner.

Carli Lloyd had two chances after entering the match. She was ruled offside in the 81st minute, negating her goal on the rebound of Horan's free kick, and Pereira robbed her in stoppage time.