When looking at current landscape of the current youth movement in American soccer, it really started when players of the 1998 birth year matured. That class generated Christian Pulisic and Weston McKennie. After the 1998 class, every birth year through 2002 (Giovanni Reyna, Yunus Musah) is represented on the U.S team’s 23 player Nations League roster. 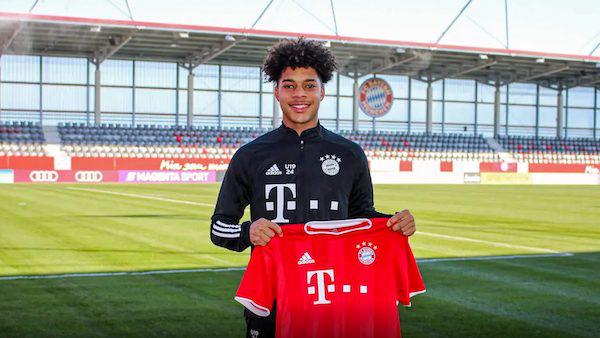 This current trend of impressive birth years for American players looks like it will continue into the future and the signs are very promising that the 2003 birth year will be especially impressive both in terms of quantity and quality of players.

As many MLS teams have opted to sign young players within their academies to homegrown deals, it seems more likely that most of the top players will follow the path of Tyler Adams, Brenden Aaronson and Mark McKenzie: start domestically before moving abroad. With that in mind, the 2003 birth year has already seen players such as New York Red Bull midfielder Caden Clark, San Jose Earthquake winger Cade Cowell, FC Dallas forwards Dante Sealy and Ricardo Pepe, D.C. United midfielder Kevin Paredes all make positive impressions in the league season.

Justin Che, meanwhile, is easily one of the best of this talented birth year so far. The native of Richardson, Texas, and defender out of the FC Dallas academy signed a homegrown deal with the club before playing and impressing with its USL League One affiliate North Texas SC in 2020 (where he was named to the All-League Team for the season) before going on loan to Bayern Munich in February.

FC Dallas has a partnership agreement with Bayern Munich that has seen Dallas players head to Germany to train with the perennial Bundesliga champions. In 2018, Bayern Munich acquired Chris Richards from FC Dallas on loan following an impressive training stint and that translated to a full transfer in early 2019.

Now it appears as if Che, 17, could become the next FC Dallas player to make a full transfer to Bayern Munich after making eight appearances with Bayern Munich II in German’s 3.Liga. It has been well-reported in Germany that Bayern is negotiating a deal to buy Che from Dallas.

"There is the stereotype of American soccer compared to European soccer,” Che said at the start of his loan. “Yes, top European soccer is better. But there's also some players in America that can compete with European soccer, if not be better. I definitely thought I showcased some of that. The style of play is quick. The players growing up here, they come up where technique and composure and precision is a big thing on the ball. That's why you kind of see the difference between the top leagues and in other leagues across the world.”

Following the season, Che was called up to the U.S. national team for the European camp leading up to the friendly against Switzerland. While Che did not play in the 2-1 loss, he impressed teammates in camp.

He is also part of a growing contingent on U.S. national team of players coming out of the FC Dallas academy. Weston McKennie, Reggie Cannon, Bryan Reynolds, Tanner Tessmann, Jesus Ferreira and Kellyn Acosta are all players who have come from the club’s academy and have played for the U.S. national team this year.

“Justin to me is a really special case because this is the first time I've met him but he's come up through the FC Dallas academy,” Cannon said of Che. “He's on a very similar path to Chris Richards. Seeing him in camp, he's incredibly talented. I think everyone here can vouch how suprised they are where he's at for such a young age. He's such a technical center back. Even though he's young, he's learning how to defend at a high intensity while controlling the space behind. He's a very good player and I can see why Bayern wants him.” 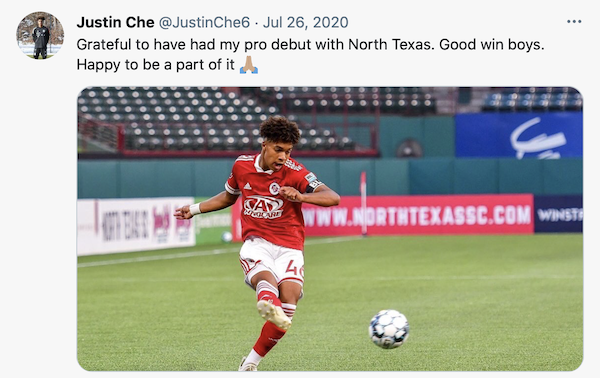 Che, meanwhile, is very appreciative to what he learned from the FC Dallas academy. His father, Chris, is a native of Cameroon and a former professional player whose career ended in 2001 when he was injured during a trial with the Dallas Burn. The elder Che is now currently a coach within the FC Dallas youth system and that has helped tighten Justin’s bond with the club – which dates back to when he was 7.

“On the academy, I came there when I was 13 but I was I was playing for their select teams and was with the club since I was age 7,” Che recalled. “I've always kind of played for Dallas. ... I have amazing memories, great times with some of the players there with the teams. Year by year I kept improving and learning and taking in as much as I could from the coaches.

"One thing led to another and I signed a homegrown deal. The homegrown deal I think really propelled this whole Bayern thing. I'm very grateful for that. Luchi [Gonzalez], Mikey [Varas] -- they also had a plan for me and they saw that I could really be something in the future.”

“Mikey was the one who actually transition me to a more defensive role because he saw something in me at a young age. I became like a center back kind of because of him. It turned out for the best,” he added. “[North Texas head coach] Eric Quill, he took me in under his wing. He gave me opportunities, chances to grow as a player, to get some playing time and showcase what I could do. He also coached Chris Richards.. Eric also saw a path for me and a future for me.”

For the U.S. team, Che has the advantage of being eligible for several youth teams in addition to the U.S. national team. The 2023 U.S. U-20 cycle would allow Che to play with other players of the 2003 birth year and make a run at the U-20 World Cup. There is also the U-23 team in 2024. The Swiss camp revealed that Che is on Berhalter’s radar and perhaps a Gold Cup would provide Che a chance to earn his first cap.

The Gold Cup would also serve as an opportunity to “cap-tie” Che who is eligible for several countries. His mother, Angelina, was born in Russia (to German parents) and raised in Germany. As a result, Che is eligible for the United States, Germany, Russia, and Cameroon.

Growing up, Che actually first learned to speak Russian in his house before learning English, followed by German. Over the course of his childhood, he made trips to Germany to visit his grandparents – who still live in Mannheim. The German national team was one of his favorite teams as a kid and now playing for Bayern Munich, he becomes more visible as an option for German youth national teams.

Obviously, the recent U.S. call-up was non-binding but it did signify that he is a player who the national team staff rates for the future.

While so much remains unsettled at the moment for Che in terms of his club situation and future national team involvement, he has taken advantage of every opportunity along the way to give himself potential options and ensure that he has a bright future ahead.