Ethan Horvath, the hometown hero with the storybook ending

The phone of Ethan Horvath's agent is going to be ringing off the hook.

The staffs of European clubs are going to wake up on Monday morning to see the highlights of the Concacaf Nations League final and ask about Horvath, the little-used keeper, a free agent after the 2020-21 season at Belgian champion Club Brugge and improbable hero of the biggest U.S. men's win in a generation.


Man of the hour Ethan Horvath with his family. pic.twitter.com/bJgBUQew0j

Called off the bench after starter Zack Steffen was suffered a non-contact knee injury in the second half, Horvath made two saves late in regulation to send the game into overtime tied at 2-2 and watched the USA go ahead  in the 114th minute on a VAR-aided penalty kick converted by Christian Pulisic.

Amid all the commotion of the deliberation on a VAR decision, it's easy to lose focus. Pulisic didn't, burying the biggest penalty kick of his career, high and into the corner past veteran Mexican keeper Guillermo Ochoa after he was adjudged to have been body-blocked in the penalty area.

The wait was equally long before VAR gave Mexico a penalty kick of its own for a Mark McKenzie handball, but Horvath preserved the 3-2 win with a save on Andres Guardado's penalty kick 10 minutes later.

"Just thinking how difficult it is for goalkeepers to come into a game at that stage of the game and then to make the impact he made was remarkable," said U.S. coach Gregg Berhalter. "I am really proud of Ethan. It's been a tough season for him, and to come have a performance like that in his hometown is the stuff that storybooks write about."

Horvath grew up in the Denver area, where his father, Peter, had been a pro indoor player with the Avalanche and was the girls soccer coach and assistant principal at Columbine High School in 1999 when the massacre took place at the high school. Ethan signed his first pro contract when he turned 18 in 2013 with Norwegian club Molde coached by Ole Gunnar Solskjaer, now the Manchester United manager.

Success with Molde came quickly for Horvath -- -- he credits Solskjaer with helping him with his footwork with the ball -- and he caught the attention of Club Brugge, which signed him to a contract through the 2020-21 season in 2017 when he was 21.

Horvath started the last three games of the 2018 Belgian playoffs when Club Brugge won the league title and enjoyed a run of three straight shutouts in the 2018 UEFA Champions League group stage: 4-0 at Monaco, 0-0 at Borussia Dortmund and 0-0 against Atletico Madrid. But after Brugge signed veteran Simon Mignolet early in the 2019-20 season, Horvath has made all of two league appearances, one after Mignolet tested positive for coronavirus last October and one in May for the final game of the season after Brugge clinched the league title.

"It is kind of surreal to be back home in Denver," Horvath said. "When I found out the games were going to be played here, I was very happy because it's been three or four years since I have been home. And for the semifinal game and today, I needed 21 tickets."

Horvath, who turns 26 on Wednesday, was reduced to tears after helping Brugge beat Russia's Zenit St. Petersburg, 2-1,  in their opening game of the 2020-21 Champions League, an opportunity to play that only came because of Mignolet's COVID-19 positive test. He was also in tears as his teammates hugged him after Sunday's dramatic win. 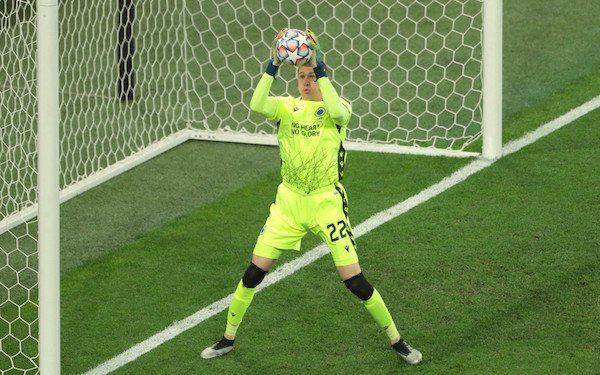 Weston McKennie, another of the USA's heroes with one goal and a header off the post on another corner kick that led to Gio Reyna's goal, said he and his teammates gave Horvath the game ball.

"As a goalkeeper, it's hard to get minutes as it is," said McKennie. "There aren't many rotations, and you don't sub in a game unless there are situations like today. We gave him the game ball because for our keeper to come into a game like that which is high-rolling, going a 100 miles an hour and make the big saves and secure the win was big, big time."

McKennie gave Horvath credit for not losing focus while everyone waited to see if Panamanian referee John Pitti would award Mexico a penalty kick in the 124th minute.

"He did not lose his head," said McKennie.

It is also easy for a backup keeper's mind to wander off during the study session on the opposing team's penalty-taking tendencies -- what are the chances he will even play? -- but Horvath also did not lose focus then.

As Guardado stepped up to take his penalty kick that would have tied the score at 3-3, Horvath didn't forget what Aron Hyde, the men's goalkeeper coach since January 2020, told Steffen, David Ochoa and him on Sunday morning about the veteran Guardado. Horvath stretched low to his right and pushed Guardado's attempt wide of the goal.

"It was just us down to doing our homework," he said.