USA-Mexico: The good, the bad and the ugly 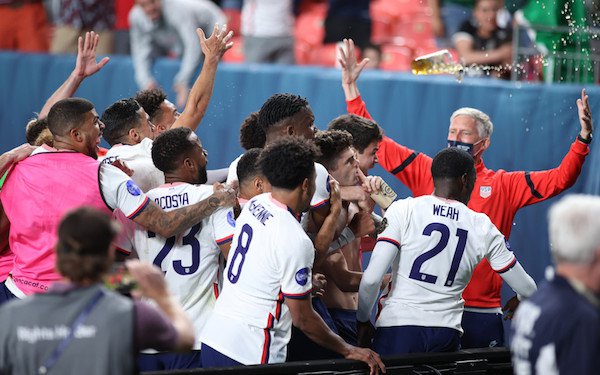 The USA and Mexico have faced each other 71 times but never played a game like they did on Sunday night in Denver.

They had never played with VAR before, and it intervened three times.

They had never had one team take the lead two times, at least not in a competitive game, and end up losing.

They had never had a game in doubt until a penalty kick was saved in the 124th minute.

The USA beat Mexico, 3-2, to win the Concacaf Nations League in a match filled with the good and the bad, by both teams, sometimes on the same play, as well as the ugly.

1. Tecatito Corona makes Mark McKenzie pay (1-0, Mexico, 2nd minute).How well can the USA play out of the back under pressure from Mexico? In the aftermath of Mexico's 3-0 win in September 2019, that was the lingering question about the U.S. backline. An early answer: Not very well. Three U.S. players -- Kellyn Acosta, John Brooks and DeAndre Yedlin -- have chances to gain possession but fail. Yedlin finally wins the ball from Corona and plays it backwards into the penalty area to McKenzie, whose pass intended for Weston McKennie is picked off by Corona, who has a clear path toward goal and beats Zack Steffen to the near post. It's the earliest goal the USA has conceded against Mexico since Kasey Keller's misplay of Alexi Lalas' equally tentative backpass 39 seconds into their 1997 match in Foxboro, Massachusetts. Keller played the ball off Carlos Hermosillo's forehead, and the ball went into the goal. (The World Cup qualifier ended 2-2 after the USA twice rallied from a goal down.)

2. Sergino Dest puts Edson Alvarez on his butt (18th minute). For the last month of LaLiga season, Dest was a shadow of the player who won the Copa del Rey with Barcelona in April, and he has looked gassed in his three games with the USA, beginning with the Switzerland friendly on May 30. But the 20-year-old defender produced a moment of magic when he took an outlet pass from Steffen, played a one-two with Pulisic, beat two Mexico defenders on the touchline and then sent Edson Alvarez, his former Ajax teammate, to the turf on the edge of the penalty area before hitting a wasteful cross. Mexico turned the ball over just as quickly, starting the USA's first sustained attack of the game.

3. VAR saves USA (26th minute). Yedlin plays a cross over the line with no one around him for a corner kick. Mexico plays a short corner kick. The USA has all 10 players in the area, but they fall asleep, allowing Hector Moreno to head in Hector Herrera's cross. Two minutes later, Panamanian John Pitti calls the goal off for offside by Moreno, the Mexican's foot standing right on the 6-yard line as a marker, after watching the replay on the monitor at midfield. It's the first VAR call ever involving the men's national team.

4. Gio Reyna equalizes (1-1, 27th minute). With 20 seconds of the resumption of play, the USA wins a corner kick of its own at the other end of the field following a long McKennie throw-in. McKennie rises to meet Pulisic's corner kick and heads the ball off the post (where no Mexican is standing). The ball rebounds to Gio Reyna, who scores with his left foot.

5. Zack Steffen exits with a knee injury (69th minute). The U.S. keeper comes off his line to pick up an errant Mexico pass at the edge of the penalty area with no one around and pulls up limping. Six minutes later, he leaves the game and is replaced by Ethan Horvath. It's the first time since the 2016 USA-Mexico World Cup qualifier that a U.S. keeper has had to leave a competitive match due to an injury. (Brad Guzan replaced Tim Howard in the first half after Howard pulled a muscle in his leg. Mexico went on to win 2-1, ending the Dos a Cero mastery over Mexico in Columbus.)

6. Diego Lainez puts Mexico back ahead (2-1, Mexico, 79th minute). Many U.S. fans will only know the 5-foot-6 Diego Lainez from his téte-à-tête with 6-foot-4 U.S. defender Matt Miazga during the 2018 USA-Mexico friendly in Nashville, the last time the USA beat El Tri. Lainez, a last-minute replacement for injured Erick Gutierrez on Mexico's Nations League roster, needs only 66 seconds after entering the final to put Mexico back ahead. Lozano finds the 20-year-old winger all alone on the right side, and he beats Tim Ream, cuts to his left and beats Horvath inside the near post.

7. Third time is a charm for Weston McKennie (2-2, 82nd minute). Within two minutes, the USA wins another corner kick after Chaka Rodriguez trips on the ball and plays it over the end line while dealing with a Tim Weah cross. McKennie, who had headed off the post on the play leading to the USA's first goal and earlier in the second half forced a diving save from Guillermo Ochoa on a header off a corner kick, this time doesn't miss, putting his header down and past Ochoa inside the near post. For the second time, the USA responds after going a goal down.

8. Homophobic chants force game stoppage (90+6th minute). As stoppage time nears its end, the game is interrupted by fans making homophobic chants in the stands directed at Horvath while he takes a goal kick. FIFA has introduced new strict anti-hate protocols, and the game is interrupted. Another first for the USA-Mexico rivalry. Nine minutes of stoppage time is needed -- and it won't be the longest of the night.

9. Hector Herrera escapes without a red card (93rd minute). The Nations League final featured eight yellow cards, but Pitti did not issue any red cards, at least not to any players. Herrera is very lucky to escape a second yellow card for his lunging dive, studs exposed, on Weah in midfield. Late in the second half, Herrera was issued his first yellow for putting his cleats into Horvath's chest as the keeper dove for a ball.

10. The drama of VAR (111th minute). A counterattack involving four U.S. subs -- Sebastian Lletget, Jordan Siebatcheu, Weah and Reggie Cannon -- puts Pulisic free in the penalty area, and he goes right at two Mexico defenders before being taken down by Carlos Salcedo. Pitti deems the play is worthy of video review and heads to the monitor a second time. Mexico coach Tata Martino tries to get a peek of what Pitti is looking at and extends his arm over the referee's shoulder. U.S. coach Gregg Berhalter, knowing the trouble his former MLS coaching colleague is in, tries to push Tata back. Pitti turns around, sees who it is and reaches in his pocket to issue the Argentine a red card. Martino and Berhalter exchange works, laughing. Pitti returns to the field, makes the rectangular TV hand signal and wildly points to the penalty spot.

11. Christian Pulisic puts the USA ahead for the first time (3-2, USA, 114th minute). Pulisic had been largely invisible in the tournament until he was taken down for the penalty area. Exactly six minutes after the foul, he shows his cool, burying his penalty kick high into the corner of the goal to score the most consequential goal of his U.S. career.

12. Gio Reyna goes down (115th). Pulisic immediately takes off his shirt and heads to the corner, where the USA players celebrate. They are pelted with objects from Mexico fans, and Reyna, who exited the game the 82nd minute, goes down after being hit by a projectile. The fan who threw the object is later arrested, banned from Empower Field at Mile High and facing criminal charges.

13. VAR III (119th minute). The USA had its success on corner kicks. It also had trouble defending them. Mexico plays a short corner kick before the USA can regroup, and Luis Romo's header deflects off McKenzie's arm in the area. Penalty? Pitti initially says no, but after video review awards a penalty kick to Mexico.

14. Ethan Horvath saves the day (120+4th minute). This time, five minutes separate the original foul and the taking of the penalty kick. Horvath keeps his wits about him and remembers what his goalkeeper coach, Aron Hyde, had told the keepers in their morning review of Mexico penalty takers. He dives to his rights and pushes away Andres Guardado's low shot, struck with power but too far from the post. Horvath pushes the ball away to preserve the win.

men's national team, referees
16 comments about "USA-Mexico: The good, the bad and the ugly".
Read more comments >
Next story loading