USWNT: Vlatko Andonovski on getting Tobin Heath and Julie Ertz ready for Olympics 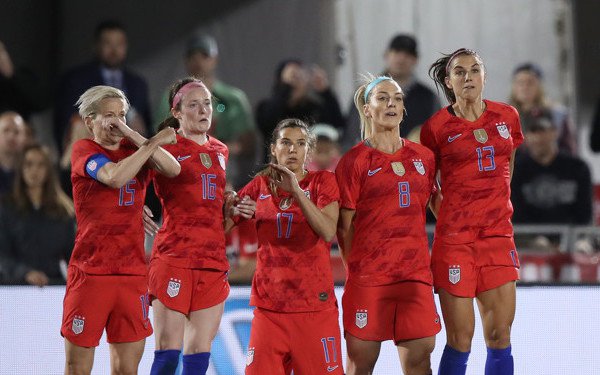 The U.S. women's national team opens a three-game home series on Thursday when it hosts Portugal at BBVA Stadium in Houston.

It will be the last series before U.S. coach Vlatko Andonovski names his 18-player squad for the Olympics. His roster for the 2021 WNT Summer Series consists of 23 players, so that gives you an idea of the challenges ahead for him.

When you add rehabbing Tobin Heath and Julie Ertz -- starters on both the 2015 and 2019 world championship teams -- into the mix, that makes the competition for spots on the team ridiculously intense.

On Andonovski's conference with the media on Wednesday, much of the focus was on the status of Heath and Ertz and the battle for the last spots on the team.

Heath is in Houston, training with the team as she continues her comeback from a knee injury. Heath, who joined Manchester United in 2020, has not played for the USA in 2021.

"I would say Tobin is a little bit ahead of Julie," Andonovski said. "She's in camp and training every day. She is medically pretty much ready. Physically, we gotta prepare her to build her stamina on the field."

Andonovski said Heath's chances of making the Olympic team were "pretty good," citing her progress and her pre-injury form at United. "The last time we were able to see Tobin, she was probably the best player on the field," he said, citing the November friendly at the Netherlands, the U.S. women's first game back following the COVID-19 shutdown.

Ertz is dealing with a knee injury of her own -- an MCL injury suffered in the Chicago Red Stars' opening game of the 2021 NWSL season -- but is also expected to return to health before the Olympics.

"We're in constant contact with Julie," said Andonovski, "and our medical staff oversees her rehab and everything that she does with the doctor and PT. We're gonna have our medical staff go and see her in person in a couple of days just to make sure how fast is her progress. We're excited where she's at right now, but we're going to have to be very careful with our approach and make sure that she's fully recovered before she plays games."

The USA is deep up front, where Heath plays, but doesn't have the same depth at the No. 6 position, where Ertz is considered the best player in the world.

Other midfielders who could step into the position are Lindsey Horan and Andi Sullivan -- Horan would be considered a lock to make the Olympic team while Sullivan is a long shot -- but defenders Tierna Davidson and Emily Sonnett are expected to get minutes at the No. 6 position during the Summer Series.

"Julie can do both sides of the game," said Andonovski, "but we are going to test some players to play in the 6 in a more offensive role. At the same time, we're going to test the 6s that have a slightly more defensive role just so we're prepared for whatever we need."