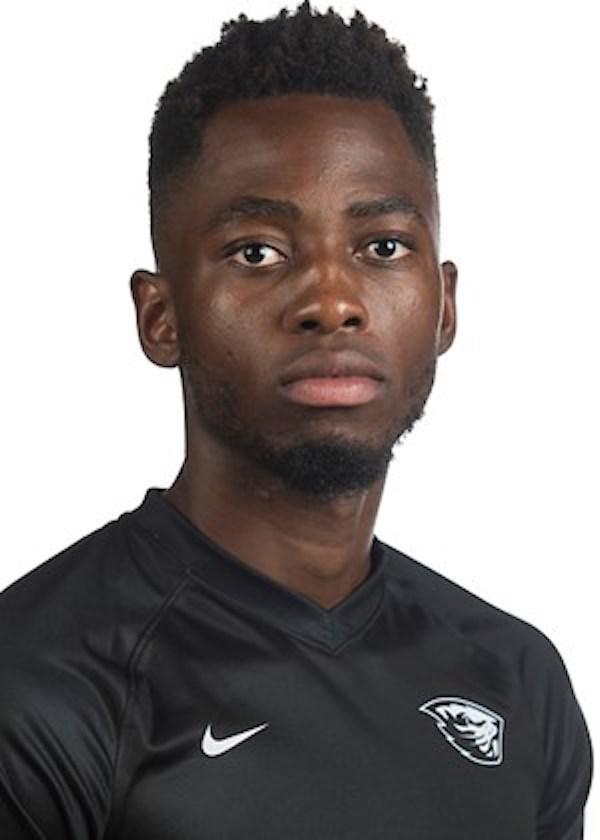 When Oregon State University freshman Gloire Amanda  arrived on campus, he wrote down his goals. Among them: win the MAC Hermann Trophy, as college soccer’s top male player.

Then he listed everything he had to do -- training routines, nutrition, you name it -- to get there.

The striker’s attention to detail paid off. Last month, Amanda -- the nation’s leading scorer, with 15 goals and 37 points this season -- won the prestigious prize.

Not bad for a young man born in a Tanzanian refugee camp, who then immigrated to Edmonton at 10 without speaking a word of English. All without ever having played organized soccer in his life. Amanda’s parents, Mauwa Mlebinge and Amanda Songolo, fled war in the Republic of the Congo.

They’d already spent two years in the camp when he was born. Life was not easy -- the family grew their own food, and raised chickens in the backyard -- but Amanda had school and soccer.

He played every day with his brothers, and much older players. “We played till the sun disappeared. Then we walked home,” he recalls.

The games were just pickup. There were no coaches or organized teams. Yet Amanda found in soccer a way to express himself, to feel free and happy. And although there were no uniforms or league standings, every game was competitive. “It didn’t matter if I was 7 years old, and the others were 15. They got mad if we lost.” Amanda was expected to contribute -- and get up after being knocked down, to play another game.

Edmonton, Alberta could hardly be further -- geographically, culturally, linguistically, meteorologically -- from Tanzania. When his family was resettled through a Canadian agency, an official met them at the airport with jackets. Amanda had no idea why. Then he stepped outside. A week later, he and his brothers saw snow for the first time. They rushed outdoors to touch it. Almost immediately, the bitter cold forced them back indoors.

Amanda’s first languages were Swahili and French (his first name means “glory”). He learned English in part through cartoons. School was difficult at first. Recess offered a respite. Amanda saw his brothers then. They played soccer, and made friends.

“That’s where I felt people could understand me. It was a place where I could speak with my classmates, and make friendships.” A decade later, his strongest relationships have been forged on the soccer field.

When Amanda was in seventh grade, he joined his first organized team. St. Nicholas, a Catholic school with a strong program, offered him a spot. Just as importantly, director Marco Bossio provided inspiration.

Amanda says, “He told me if I learned the basics, I could do things in football. He talked about decisions on the field, health and fitness. I was just a kid. But he really wanted to help.” The young player rose rapidly through the ranks. He played on several teams, including FC Edmonton. At 14, he left the life he’d known for a second time. After his parents were reassured he would continue his education, Amanda joined the Vancouver Whitecaps’ MLS residency program, 1,100 miles away.

But finally, life as a soccer player became real. For the first time, Amanda wrote down his goals. Each day he tried to get closer to them.

“I began to think ‘I’m a footballer,’” he says. He reads space and the game well; he’s technically and tactically aware, and puts himself in good positions to receive passes. Scoring brings special joy; it’s a way he knows he has contributed.

As Vancouver’s residency program was ending, Amanda -- by then captain of the U-18 side -- pondered his next move. A United Soccer League offer was not viable financially. His parents wanted him to continue his education. He was attracted to an offer from the University of Connecticut -- and he liked Coach Ray Reid’s record of sending players to the pros – but Oregon State head coach Terry Boss urged him to visit.

After 30 minutes on the Corvallis campus, Amanda says, he knew the fit was right. The decision to stay on the West Coast was a good one. His goalscoring prowess sparked the Beavers for three years. Teammates from Africa, Europe and the U.S. formed strong bonds. “We were all away from home. We relied on each other. We do everything together,” Amanda says. That includes that most Oregonian of pastimes: hiking.

The physical demands of college soccer surprised him. As a competitor -- one whose mettle had been tested playing against older players in his refugee camp -- Amanda felt at home. Those goals he wrote down helped too. “Coach Terry Boss is very competitive. He says that’s the way to play football. If you prepare and play well, the outcome will be fine. It’s been a joy so far.”

Among the most joyous moments: a back-and-forth 4-3 overtime win at home against UCLA. With the score knotted, a wide-open Amanda yelled for the ball. A teammate shot instead, icing the match. “The place went nuts. I’ve never been so happy in my life!” Amanda says.

The past year, during COVID, has been tougher. Amanda tried to stay positive. “Some people lost a soccer season. But other people had it a lot worse -- they lost family members. I treid to see the big picture. We stayed, we were disciplined, we played.”

And he took that Hermann Trophy list to heart. “I believed in myself. I thought I could be at the top of college soccer.” 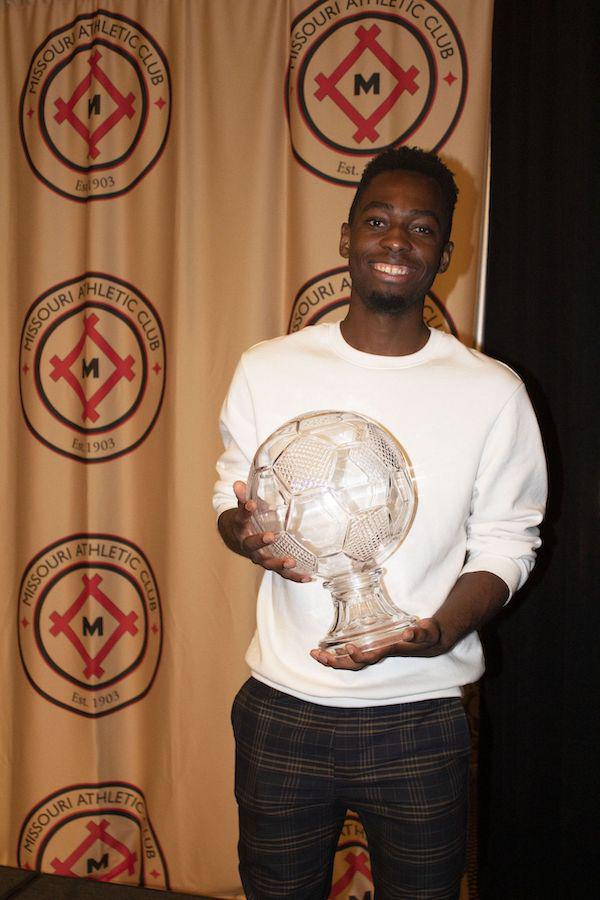 Of course, Amanda admits, “I’m human. There are days I wanted to sleep in. But I knew I couldn’t.”

Hearing his name announced -- first on the preliminary list, then as one of three finalists, finally as the MAC Hermann winner -- was “surreal. All I could think was, ‘I wrote this down. Now I’m here!’”

Amanda laughs. “I can’t tell you most of those. They’re big. They’re motivating. They’ll keep me on task.”

He pauses. “OK. Here’s one: Win the Champions League, with Liverpool.” How will he make that happen? Gloire Amanda has a quick answer: “I’ll wake up at 5 a.m. every day, if I have to.” And he’ll do it wherever, in this big wide soccer world, he happens to find himself.