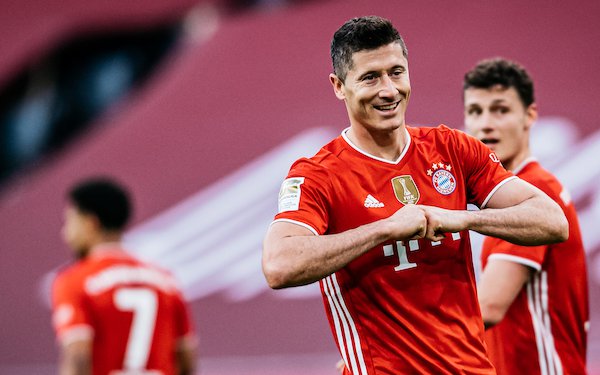 Given the international attention on the European Championship and the award's European orientation, the favorite for the 2021 Ballon d'Or should be one of the stars of summer.

The award, presented by the French magazine France Football, is already a state affair.

France president Emmanuel Macron weighed in on his preference, speaking on French radio station RMC on Thursday from the French national team's training facility in Clairefontaine.

"N'Golo Kante is a great player, like Kylian Mbappe and he is an example," said Macron. "He is an example for the youth of the country. When we see again the season Kante has had with his club, and I hope the Ballon d'Or too and I'm sure what he will do in this Euros."

1. Robert Lewandowski (Poland). The Pole would have won the Ballon d'Or in 2020 when he helped Bayern Munich win the UEFA Champions League, but the editors at France Football decided rather early in the pandemic not to award a winner. He led Bayern to another German title -- its ninth consecutive Bundesliga crown -- and set a new league record, scoring his 41th goal of the season to break the record set by Bayern great Gerd Mueller back in 1972.

2. N'Golo Kante (France). The 30-year-old Kante, born in Paris to Malian immigrants, was the midfield dynamo on France's 2018 World Cup championship team. His play in the latter stages of this season's Champions League was the biggest reason why Chelsea lifted the trophy.

3. Kevin De Bruyne (Belgium). The Manchester City star won the PFA Player of the Year success as the top player in England for the second time in a row. He needed surgery after suffering facial injuries in a collision with Chelsea's (protective mask-wearing) Antonio Rudiger in the Champions League final but is expected to play in the finals.

4. Ruben Dias (Portugal). De Bruyne's Manchester City teammate won the 2020-21 Premier League Player of the Year award in his first season following his transfer from Benfica, where he grew up in its academy program. At 23, he is just one of many young players whom Portugal has added since winning the 2016 title.

5. Kylian Mbappe (France). PSG didn't win the Ligue 1 title, but Mbappe finished with 27 goals in 31 games to lead Ligue 1 in scoring or the third consecutive season.

6. Romelu Lukaku (Belgium). Lukaku (30 goals and 11 assists in all competition) was voted Serie A's Player of the Year after helping Inter Milan to its 19th Italian title but first since 2010.

7. Bruno Fernandes (Portugal). Another player who has excelled since his move from Portugal -- Sporting -- to the Premier League -- Manchester United -- in 2020. He finished with 28 goals and 17 assists for United in all competitions.

8. Karim Benzema (France). After more than five and a half seasons away from Les Bleus, Benzema is back to join Antoine Griezmann and Mbappe in their attack. It's about time. Real Madrid didn't win LaLiga title but Benzema scored 23 goals, the second most in his 12 seasons with Real Madrid.

9. Joshua Kimmich (Germany). If Germany is to go far at the Euros in head coach Joachim Loew's swansong, it is going to need a big tournament from the versatile Kimmich. He was a big reason why Bayern won the 2020 Champions League and came back from a slow start to win another Bundesliga title.