Performance against 'better' Mexico promises a brighter future for the USA

One of the first musical documentaries, even styled as a rockumentary, was the video production of the making of the charity single, “We Are the World.” In an epic all-nighter, celebrity musicians recorded the song written by Lionel Richie and Michael Jackson. At one point, however, a disagreement surfaced about the word better vs. brighter in a lyric. The compromise eventually was to use both, in different places. 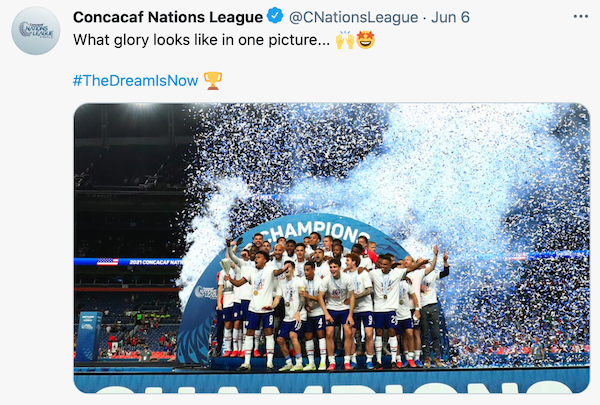 It came to mind after the Concacaf Nations League final on June 6, reading through various reaction pieces, especially some Spanish-language ones, that maintained Mexico played better, despite falling in overtime to the USA, which won 3-2.

The view of "Mexico played better, but lost," is not a new one. In the historical record (36–15–20), Mexico has dominated the overall matchup between the two teams, but lost several key games, including a 2002 World Cup elimination game that sent the USA squad to the quarterfinals for the first and only time this century. The early aughts saw a fair number of USA wins over El Tri, as Mexico’s team is known. The "Mexico as moral victor, even while USA actually won" concept was often maintained as justified by pointing to classic characteristics, such as a flurry of Mexico shots on goal, a lopsided possession percentage, and a stellar goalkeeping performance by a U.S. player.

Sure enough, statistics indicated some of that scenario was valid. In the Nations League final, the USA maintained only 43% of the ball against Mexico’s more dominant 57%. Not one, but two American goalkeepers, Zack Steffen and Ethan Horvath, made impressive saves in the game, none more so than Horvath’s parry to deny Andres Guardado a late tying goal from the penalty spot.

But the USA matched Mexico exactly for shots on target (7), so it wasn’t as if El Tri generated far more quality chances. The USA developed more corner kick opportunities, including two that resulted in goals.

More importantly, though, there were elements cropping up in the U.S. play that couldn’t be registered on a stat sheet. Call it sauce, call it impudent improvisation, call it trying stuff -- a creative spark too many workmanlike U.S. players traditionally often lack was evident time and again. Whether it was Gio Reyna firing from distance or Sergiño Dest on a mazy run up the field, the unexpected, both delightful and dangerous, was often evident on the USA side, while Mexico played generally more predictably, cleanly.

That’s no surprise, given the quality of veterans on the El Tri squad, like Guardado, Hector Moreno and Hector Herrera. But all of them are in their thirties now, and the four-year gap in average years to the recent USA squad is problematic because once any or all of these players start to lose a step, there isn’t a backup groomed and ready to go. 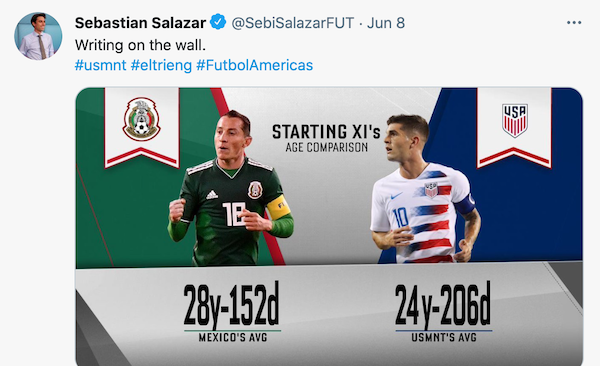 Guardado, who had the supreme humility and class to congratulate Horvath for his memorable save, is an example of how Mexico can and does send players abroad to succeed in Europe. Guardado has been abroad for a decade now, but while he may have blazed a trail, the path hasn’t been followed by numerous Mexican players. There certainly isn’t a large generational wave of Mexicans abroad at present like there is for the USA.

What’s most hopeful for USA fans and worrisome for Mexico’s is that the "USA players weren’t great," take has a degree of merit. Potentially the greatest talent of the USA’s current generation, Christian Pulisic, despite a well-taken penalty kick, didn’t have an especially impactful game vs. Mexico. Young defenders, like Mark McKenzie, made errors that led to Mexico scoring and spent much of the match struggling to adjust and recover. Tim Ream, an older and never especially quick defender, has definitely lost a step. But the truth that hurts, at least if one is a Mexico fan, is if the USA can wobble, recover and still defeat Mexico while never completely gelling cohesively or playing at their top level, what happens if and when that improvement arrives?

The youth alone of the U.S. squad indicates a high ceiling for ultimate performance. The competitive environment many of the current players are in points to more development coming soon.

Though a listless Costa Rica squad in a friendly following the competition win isn’t the most reliable benchmark, the USA also put in a confident performance, getting four goals past the Ticos on Wednesday. Mexico wasn’t able to earn a single goal in regulation of the semifinal of the Nations League six days earlier against the same team. Baby steps of USA improvement can escalate in speed and greater consistency to outpace Mexico even more soon.

With players like Guillermo Ochoa and Guardado leading the way, Mexico currently has a valid claim to being the better team on paper over the USA, but that’s not ultimately how results are decided. Beyond the counterpoint of, “Scoreboard,” in the latest win, the USA squad right now is more dynamic, more electric -- simply brighter.

In the upcoming Gold Cup, the pendulum of glory can swing back to Mexico. If El Tri secures the trophy, it could be again a case of better beating out brighter, but that’s yet to come. Today, at least, the sun is shining on the U.S. men's national team, since the 14-year hex of not defeating Mexico in competitive tournament play is done and dusted. The new trophy has been secured. The young Americans, gleeful in victory celebration, held it aloft, light reflecting off the gleaming surface. They were the ones who made a brighter day.