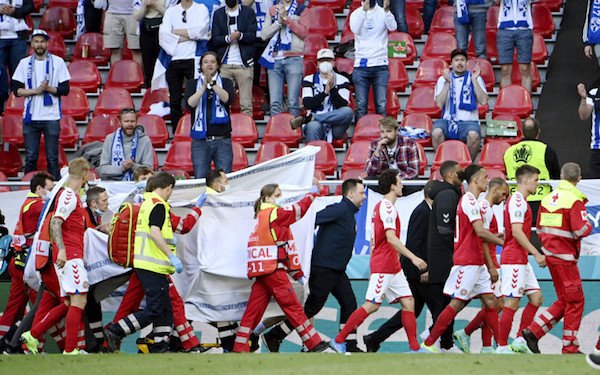 If you follow soccer, you probably watched with worry, concern and shock the drama that unfolded Saturday night at Copenhagen’s Parken Stadium.

Late in the first half of the Denmark-Finland European Championship game, Danish star Christian Eriksen collapsed to the field just as a throw-in was thrown at him. Danish captain Simon Kjaer immediately sensed the urgency of the situation and raced to his teammate as he lay motionless on the ground and made sure he did not swallow his tongue.

Eriksen was given CPR and a defibrillator was inserted by medical specialists as his teammates, some in tears, formed a semi-circle around him, all but Kjaer facing away from him, and Finnish flags tossed by fans from the nearby stands shielded the emergency crew as it worked on the stricken Dane.

The first bit of positive news came when Eriksen had his eyes open and lifted his hand on his head as he left the field on a stretcher and was taken to a local hospital, where his condition was later described as having “stabilized.”

UEFA, the tournament organizer, gave the Danes the option of continuing the game or resuming play at noon on Sunday. Danish coach Kasper Hjulmand said his players were traumatized by the incident but agreed to play on after they spoke with Eriksen.

After a delay of one hour and 45 minutes, play was resumed, and Finland, making its Euro debut, won, 1-0. UEFA named Eriksen the Man of the Match.

“It was a tough night,” Hjulmand said. “We are all reminded what the most important thing in life is and that is to have valuable relations. We have a group of players I can’t praise enough.”

Everyone's thoughts were on Eriksen as the game continued. Finnish fans in the crowd of 15,200 chanted “Christian,” while the home fans responded with “Eriksen.”

Concern about the 29-year-old Eriksen and his condition extended far beyond the Denmark locker room. He has played for Ajax, Tottenham and Inter Milan in his 11-year career and has teammates and friends scattered at teams involved in Euro 2020 across Europe.

In St. Petersburg, Belgium was getting ready to play host Russia, and Romelu Lukaku, Eriksen's Inter Milan teammate, was watching. After Lukaku scored the first of two goals in the Red Devils' 3-0 win, he raced to a camera on the sideline and yelled, “Chris, Chris. I love you.” He said it was difficult to play.

“I cried a lot," Lukaku said after the game, "because I was scared, obviously.”

In Houston, the U.S. women's national team was preparing for Sunday's friendly against Jamaica.

"It is hard for someone involved in sports not to have their thoughts on this moment," Vlatko Andonovski said on his media call. "It's unfortunate what happened, but we're happy to receive the word he is stable in better condition now."

Sports doctors interviewed after the match agreed that Eriksen had suffered cardiac arrest and the response of the emergency crew at the game saved his life.

Eriksen is not the first player to collapse in the middle of a major championship. At a 2003 Confederations Cup match between Cameroon and Colombia in France, Cameroonian Vivien Foe died of a heart attack after he collapsed and attempts to resuscitate him failed.

In the aftermath of Foe's death, FIFA introduced medical protocols and training and education in CPR to deal with such a situation as happened on Saturday in Copenhagen.

In the United States, all 50 states have enacted defibrillator use laws or adopted regulations to encourage or require training on the use of defibrillators and their placement in public buildings and transportation centers as well as at sports venues.

Proper training in CPR and the use of defibrillators -- and their rapid deployment -- have been shown to improve the survival rate of cardiac arrest victims dramatically.