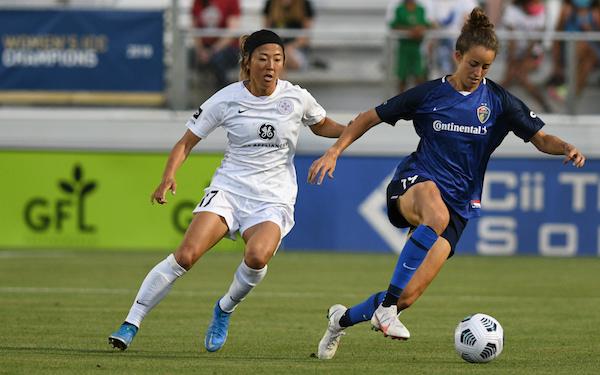 In holding the USA to just one goal in the opening game of the WNT Summer Series, Portugal served as a valuable sparring partner for the reigning world champion as it prepares for the Olympics.

The match, which ended in a 1-0 win for the USA, was a rare match in which the result was in doubt until the end. The Americans are 18-0-1 under Vlatko Andonovski. All but four of the wins have been by margins of multiple goals and the lone tie was a 1-1 draw against Sweden in April.

The Swedes are a rare team with athleticism, ability on the ball and savvy to contain the Americans.

“Especially in that Sweden game," said U.S. captain Becky Sauerbrunn, "you saw that they were playing a low block against us, and I think teams saw that and saw that they succeeded doing that."

Seeing what the Swedes did is one thing; copying them is another. But an even more critical issue for the USA is finding competitive opponents.

The USA returns to the field Sunday night against Jamaica, which it hasn't played since it beat the Reggae Girlz, 6-0, in the 2018 Concacaf Women’s Championship semifinals to qualify for the 2019 World Cup. Jamaica has been no match for the USA in their three meetings, all lossed by a combined 22-0 margin.

Jamaica went on to qualify for the World Cup for the first time, winning the third-place game in a shootout, but it had not played a game since the COVID-19 pandemic forced sports to shut down in March 2020 until its 1-0 win over Nigeria on Thursday night.

Jamaica has one international star in former University of Tennessee forward Bunny Shaw, but she is not with the Reggae Girlz in Houston. She was excused from the Summer Series after leading France's D1 Arkema with 22 goals for Bordeaux. She will be leaving financially troubled club and is considered one of the most sought-after free agents on the European women's transfer market.

Just 12 players from the 2019 World Cup are on Jamaica's roster for the Summer Series. The majority of the Reggae Girlz are based in the United States: six in the NWSL and one in UWS plus five on NCAA Division I teams.