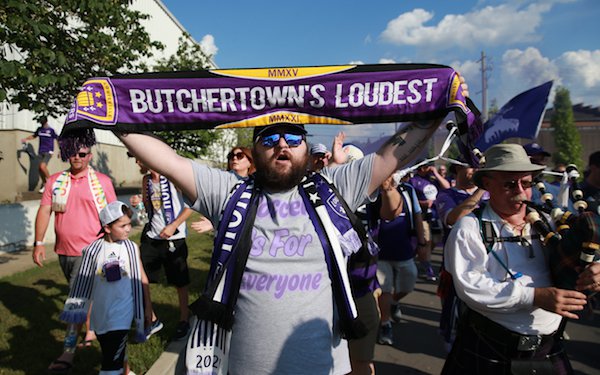 Like MLS and the NWSL, the delay in starting the 2021 USL Championship season allowed clubs to open their stadiums to more fans and get a better handle on the COVID-19 protocols necessary for their re-openings.

Louisville City celebrated Lynn Family Stadium’s first match at full capacity with a crowd of 12,115 for the 3-0 win over Memphis 901 FC.

All seating was sold out in advance, leaving only general admission tickets available for walk-up. The match was treated as the stadium grand opening -- it opened in 2020 -- with pregame pyrotechnics and  a flyover.

New Mexico United drew 9,288 fans at Isotopes Park for its 0-0 tie with the Austin Bold. After playing all its 2020 games on the road -- New Mexico had some of the strictest quarantine rules for travelers in the country -- New Mexico United is averaging 8,912 fans for three home games in 2021, second in the league behind Louisville City.

The Phoenix Rising improved to 5-1-1 -- second in the USL Championship behind the Tampa Bay Rowdies at 6-1-0 -- with a 3-0 win over the Tacoma Defiance before 7,316 fans at its new soccer complex at Wild Horse Pass.

The match was the second played at full capacity. The Rising drew 8,053 fans -- a club attendance record -- for a 2-2 tie with the San Diego Loyal a week earlier. The new stadium holds about 10,000 on the Gila River Indian Community.

The El Paso Locomotive -- the lone unbeaten team in the USL Championship at 3-0-3 -- drew 6,589 fans for its 1-1 tie with the Colorado Springs Switchbacks. All four 2021 home games at Southwest University Park have drawn more than 5,000 fans.