It’s been a dramatic and eventful first week to the European Championships, with predictions of cagey group games and tired players quickly erased by physical but generally offensive and often exciting encounters.

The return of spectators has added atmosphere even when the stadium’s only been at marginal capacity -- witness the noise made by Scottish fans in Glasgow and Spanish fans in Seville, though neither set of supporters could prompt their teams to score. And even an almost-full arena in Budapest could ultimately not help the Hungarians do more than defend for their lives for the first 84 minutes.

Meanwhile, the city of St. Petersburg -- the venue for six games in total at Euro 21 -- has introduced restrictions to public gatherings due to rising Corona numbers in the city and Russia in general. The two Swedish players who were infected with the virus -- Dejan Kulusevski and Mattias Svanberg -- have now returned to the team, but Portugal’s Joao Cancelo tested positive and had to return home. Yet the general feeling is that this tournament will continue, come what may, because everyone’s in the mood for it. A bit like a spontaneous party on a week night where the hostess cracks open another crate of beer, and nobody wants to be the buzz killer pointing out that everyone has to work in the morning.

Group roundups below, but already three quality strikes that would vie for goal of the tournament:

Turkey's negative approach may have set an important marker for the rest of the tournament -- that 10 outfield players massed behind the ball were unable to prevent a 3-0 defeat will hopefully have discouraged other teams from trying the same. When the Turks went 1-0 behind and were forced to venture forward, they had no real game plan and just opened up space for the Italians to exploit. Astonishing Fact fans (I'm in this group) were intrigued to find out this was the first time Italy had ever scored more than twice in a game at the European Championships, though not so astonishing when you remember the history of the Italian national team. Wales and Switzerland's first half looked like a typical early-tournament stand-off, but livened up after the break with two well-taken headed goals. Mario Gavranovic's late offside 'winner' would have been just about a fair result, but VAR correctly canceled the plot line. 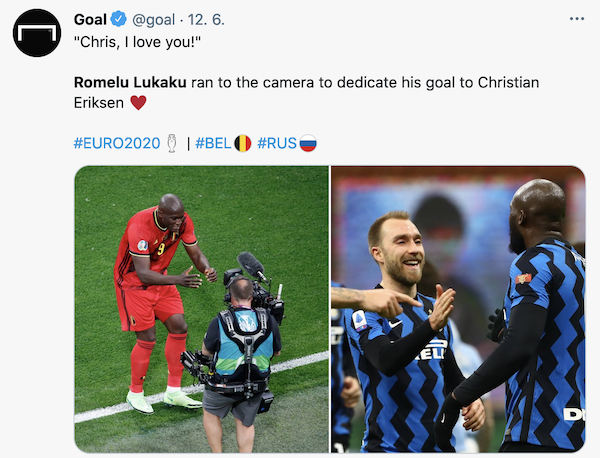 The Denmark-Finland game will forever be marked with an asterisk in the light of Christian Eriksen's collapse and merciful recovery. The Finns, with their first ever tournament game and win, did the decent thing and muted their celebrations. Credit to all players and spectators for their reactions, and black marks to UEFA for giving the traumatized Danish players a very poor choice -- finish the game now or come back tomorrow at noon. Belgium dominated the lackluster Russians, while spectators in St. Petersburg brought shame upon themselves by booing when the Belgian players and referee Mateu Lahoz took the knee in recognition of the Black Lives Matter movement. That made the 3-0 win all the more satisfying.

Best performance: Romelu Lukaku (Belgium).
Choice quote: "Chris, stay strong, I love you." Lukaku, Eriksen's Inter Milan teammate who had taken the Dane under his wing when he arrived in Italy from Tottenham Hotspur last year.

The Group of Troubled Shirts. After Ukraine needled Russia by depicting a map of its own country on its jersey that included the illegally annexed Crimean Peninsula, North Macedonia provoked Greek ire by omitting the initial 'N' before the 'M' for Macedonia on theirs. (Macedonia was the country's name until 2019, when North was added following prolonged talks with Greece, which has a Macedonian province of its own which it fears that its neighbor is coveting.) The (North) Macedonians got their first ever tournament goal, following a series of slapstick Austrian errors, but two smart late subs in Michael Gregoritsch and Marco 'angry at everyone' Arnautovic saw Austria emerge as winners after a rickety start. Meanwhile in Amsterdam, the Netherlands and the Ukraine delivered the matchup of the round with a night of glorious, goal-pocked attacking play. Memo to the other 22 teams -- this is how you play soccer. More, please.

Best performance: Denzell Dumfries (Netherlands -- already pinpointed in my preview last week, although admittedly only as the player with the most Scottish-sounding name. His winner against the Ukraine may be the closest Scotland comes to scoring, Dumfries being a town in the Scottish Borders.)

Choice quote: "It's such a beautiful feeling to score for your country at the European Championships. I don't have kids yet, but I imagine that it will feel exactly this beautiful when I do." Michael Gregoritsch (Austria), scorer of the go-ahead goal against North Macedonia.

Young England was tight and technically superior (words I've never seen in type before) against the disappointingly dull Croats who hardly mustered an effort on goal. "Wait until they play a decent team," say the cynics, but Croatia is a decent team, or at least they were until recently. They come up now against a confident Czech side that easily saw off the raw, enthusiastic, but headless Scottish challenge in Glasgow. It was good to see the Scots attack, but slack finishing and poor decision-making at key moments only stressed that, as ever, they're still just not good enough. 150 years of tradition will make Friday's England-Scotland game at Wembley a bit special and, hopefully for the Scots, the sort of game where minor matters like form, composure and talent may take second place to barn-storming, chest-thumping ... luck.

Quote: "Hey Liam." England's Jude Bellingham, the tournament's youngest ever player at 17 years and 349 days, responds to a tweet from Oasis singer Liam Gallagher, who had greeted Bellingham's introduction into the game with the tweet, "Hey Jude." 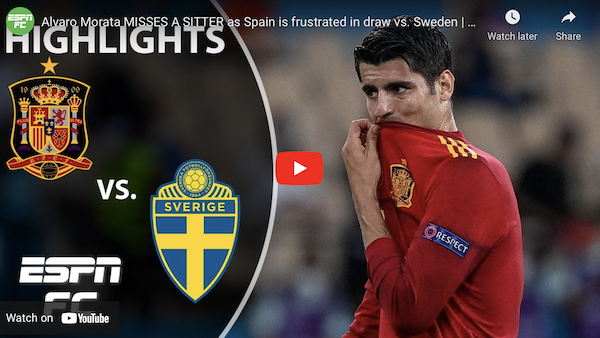 If you put aside Finland's win (for obvious reasons), then Slovakia's 2-1 victory over 10-man Poland qualifies as the surprise result of the tournament so far. Not a great game, but Robert Mak's run from the wing past two defenders that preceded his narrow-angled shot and subsequent own goal by Polish keeper Wojciech Szczesny was the sort of sequence that makes defending coaches throw their hands up and just quit the game on the spot. Spain's failure to score against Sweden, and Sweden's failure to take advantage with two prime chances of its own, was a combination of high comedy and pulsating Euro-drama. An engaging, intense night of direct, often chaotic soccer under the floodlights that seemed to wave goodbye to the endless decades of Spain passing the ball to each other like they were eternally making us watch the warmup routine from hell. Some thought it was abominable, but I loved every reckless, goalless minute. 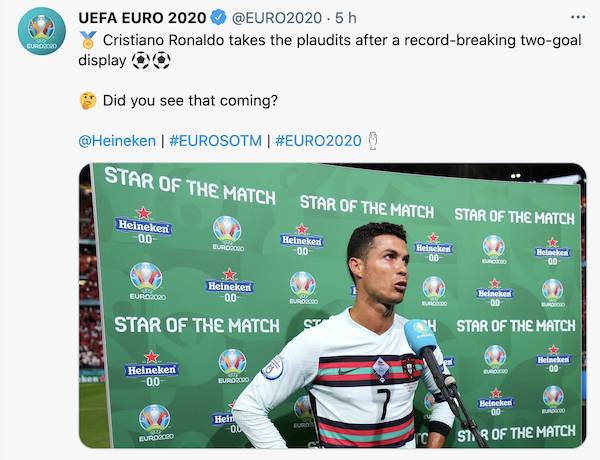 In a foul-filled game in front of a howling home crowd, keeper Peter Gulacsi kept Hungary in the game with a slew of saves until three late goals (two from Cristiano Ronaldo, making him the all-time Euros leading scorer with 11) thwarted what had looked like a scrappy but valuable point for the feisty Magyars. France’s single-goal victory in Munich belied their superiority against a tentative German team that created little of danger, while wasting several dead-ball situations with lackluster, unimaginative execution. Is there anyone in the German squad to inject the missing dynamic? The assured and swiftly counterattacking French remain the favorites.

Choice quote: “It sends a bad message. You can only hope that nothing bad happens.” Former German international Uli Hoeness on Magenta TV, observing 55,000 fans in the 61,000-capacity Puskas Arena before the Hungary-Portugal game in Budapest. Hungary has suffered almost 30,000 deaths from the Covid-19 virus, and its death rate of just over 3,100 per 1 million people is the second highest globally after Peru.