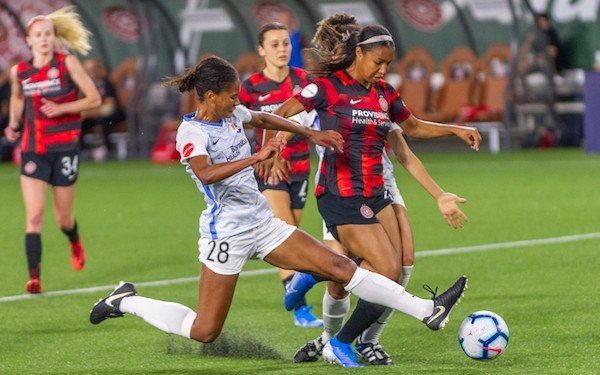 Lots of her teammates on the U.S. women's national team were on the team when it won the 2015 World Cup and went the White House.

Midge Purce is a rare athlete who's been to the White House for something other than being honored for a major team accomplishment.

In March, Megan Rapinoe and Purce met with President Joe Biden and First Lady Jill Biden to mark "Equal Pay Day." Purce, a 2017 Harvard graduate and an elected member of the university's Board of Overseers, gave a speech about the importance of equal pay for women in the White House's Eisenhower Executive Office Building.

With one game to play before U.S. national team coach Vlatko Andonovski plans on naming his 18-player roster for the Olympics, Purce has emerged as a contender for one of the last spots.

Assuming all players are healthy -- Tobin Heath and Julie Ertz are rehabbing and have sat out the Summer Series -- probably four spots are up for grabs, spots for three field players and one for a backup goalkeeper.

Given the small roster, the versatility of the players off the bench is an important asset, and Purce has that. She scored for the USA in its 4-0 win over Jamaica on Sunday, starting the game on the right wing. In the second half, she moved to right back. Andonovski praised Purce for her play but added she needed to more patient in the fullback role.

Purce, who entered 2021 with just two caps for the USA, did not follow soccer growing up in Maryland.

"When I was a child, [in] elementary school and middle school," she said in a media call ahead of Wednesday's game against Nigeria in Austin, "I didn't grow up watching much women's soccer. It wasn't that salient to me what was going on. I didn't know about the national team until a teammate of mine left one week. I was like, 'Where are you going?' 'National camp.' 'What's that?' And I was introduced to an entire world."

One of her youth coaches was Shannon Higgins Cirovski, a starter on the 1991 Women's World Cup championship team. And Purce played for the USA on the 2012 Under-17 World Cup and 2014 U-20 World Cup team.

She was the Ivy League Rookie of the Year and Ivy League Player of the Year in 2013, becoming the first player in Ivy League history to win both awards in the same season. She was a first-team All-America selection in her senior year at Harvard in 2016 and became the first former Crimson player to play for the women's national team when she debuted against Costa Rica in November 2019 in Andonovski's second game in charge.

"To even be considered, in my opinion, on one of the best teams globally would be the highest honor," she said of the chance to make the Olympic team, "and such a privilege to play for the country on that stage would just be remarkable."

Longtime national team star Carli Lloyd has seen Purce's development over her five seasons in the NWSL -- one season with Boston before it folded, two with Portland and now two with Gotham FC -- and has seen how Purce has pushed herself to move into contention for a roster spot this season as teammates at Gotham FC.

"I have to give a lot of credit to Mitch," said Lloyd after the Jamaica win. "She's not only taking her game to another level, but she's becoming more professional. This is a 24-hour, seven-day-a-week job. You can't really switch off your training and you've got to do everything possible to recover and make sure you're firing on all cylinders coming back. I know that it's been kind of difficult for her. And being in this environment I think has helped push her and then it's helped push her with Gotham as well."