Must be summer, because we’re getting reruns.

Last year, U.S. Soccer president Cindy Parlow Cone said the following in reference to the massive disparity between men’s World Cup prize money and women’s World Cup prize money: “We all know this isn't possible from a U.S. Soccer standpoint to make that up. Even pre-COVID, this would be devastating to our budget, to our programming. But given COVID, not to be overly dramatic, but it would likely bankrupt the federation."

On Tuesday, on a media conference call with Will Wilson, Cone said the following: “asking us to make up the difference in FIFA prize money is untenable, and would likely bankrupt the federation.”

In 2019, Sen. Joe Manchin introduced legislation threatening to withhold nearly nonexistent “support” for the 2026 World Cup if U.S. Soccer didn’t offer its women’s team “equitable pay.” (Yes, “equitable,” not equal, with apologies to Hope Solo and her mocking use of that word in a Eurosport ad.)

Cone responded by reminding people that the U.S. government isn’t U.S. Soccer’s benefactor and that hosting a major tournament, as was the case with the Copa Centenario, is the proverbial rising tide lifting all boats.

“Support” is at least better defined now. Manchin’s backgrounder, though not the bill itself, suggests the government has leverage in the form of “visa waivers and other special privileges for visiting FIFA officials.” Perhaps they can just deny all visas, including those for incoming teams, leaving the U.S. men to win the Cup by default.

But his bill is an empty gesture. And nothing the women’s team and its assorted sycophants say with their iron grip of the narrative can change the realities of law, math and seeing the big picture.

First, the math. The U.S. women’s expert economist calculates the U.S. women’s back pay at around $67 million, a figure that includes 1,050% of the prize money FIFA paid U.S. Soccer when the women won World Cup 2015. Last year, U.S. Soccer’s calculations showed it would have a reserve of $42 million at the end of fiscal year 2023.

COVID-19 has taken these projections on a wild ride. Last summer, the number was down to $25 million, but then U.S. Soccer wiped out a one-year deficit of $44 million. But before you add those numbers and find that the federation can now project a $69 million reserve, just enough to pay the women, consider that some of that sudden windfall was based on the stock market’s resurgence after the COVID collapse, and some of it was based on, unfortunately, national teams (including youth and extended national teams that don’t sell out stadiums) not playing soccer. When they play more, the expenses kick in again, and the women will hopefully be due a nice payout for winning the Olympics this summer.

Second, the law. U.S. Soccer can point to legal analysis from law professor Andy Haile (congratulations, incidentally -- the former Davidson soccer player has been promoted to full professor) and, more concretely, the decision from Judge R. Gary Klausner rejecting the women’s arguments. The federation also can take comfort in UCLA law professor Steven Bank expressing his skepticism that the women can win an appeal. 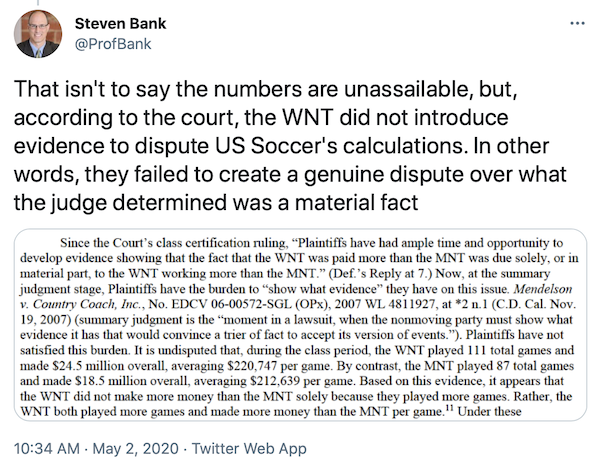 But that’s boring stuff. Check out Megan Rapinoe and company offering up feel-good rhetoric to the tune of the No Doubt classic Just A Girl! 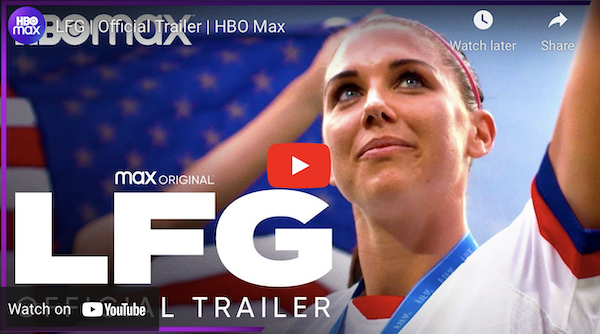 That’s the trailer for the documentary LFG, which stands for “Let’s F---ing Go.” Like a No Doubt album featuring Just A Girl, the trailer offers up all the greatest hits, including Rapinoe earnestly stating, “women get paid less to do the same job.” Neither part of that statement is literally true (or, from the rulings and filings cited above, legally true), but hey, Gwen Stefani’s singing!

The trailer offers up one new twist, though, with Jessica McDonald saying, "Even though I am on the USA team, I have to coach to make ends meet. Child care is more than my paychecks." In some of her five years with the national team that might have been true, but in 2019 McDonald earned a World Cup roster bonus ($37,500), a World Cup winner’s bonus ($110,000), a Victory Tour bonus (harder to parse out because it’s paid to the pool, but figure $50,000 at the very minimum), game pay for the 23 games on which she was on the roster (most games at $4,000), and win bonuses for friendlies (generally $5,250). An extremely conservative calculation pegs her 2019 pay at $300,000, plus her NWSL salary. That doesn’t include various “partnership bonuses,” or any child care or other benefits the federation provided. (How much the federation provides non-contracted players is rather vague in the CBA.) The parents who can’t go back to work because they can’t find affordable day care thanks to COVID might be less than sympathetic to the complaints of someone making that kind of money.

Should McDonald and every other player get more than that for winning the World Cup? Absolutely. Just as Vivianne Miedema was surely underpaid for being a runner-up, Lucy Bronze surely deserved more for taking fourth, Christine Sinclair surely didn’t get all that she deserved for advancing past the group stage, and Casey Krueger should’ve been paid more for her Best XI performance for Chicago.

Should FIFA even out the bonuses between the World Cups? Absolutely. Should more advertisers jump on the rapidly accelerating NWSL train, and should that money spill over to paying players decent wages? Absolutely.

But when McDonald says child care is more than her "paychecks," that’s misleading at best. It’s definitely not in the context of a full season on the WNT with bonuses. (McDonald earned the last of her 19 caps at the 2020 SheBelieves Cup.)

Without the WNT, she would be dependent on her NWSL salary -- she has played in all nine NWSL seasons after one season in WPS -- and that often required her to have a side hustle. NWSL sponsorship and media deals are improving but still have a ways to go.

But this is not a documentary about the NWSL.

The typical audience and the typical non-soccer sports pundit won’t get those distinctions.

It’s not that these people are stupid. These issues are simply more complex than any documentary focusing on a group of charismatic women would have you believe.

Consider the “equal pay” deals in Australia and Norway. Billie Jean King, a tennis legend and a tireless, intelligent advocate for equality, was effusive: 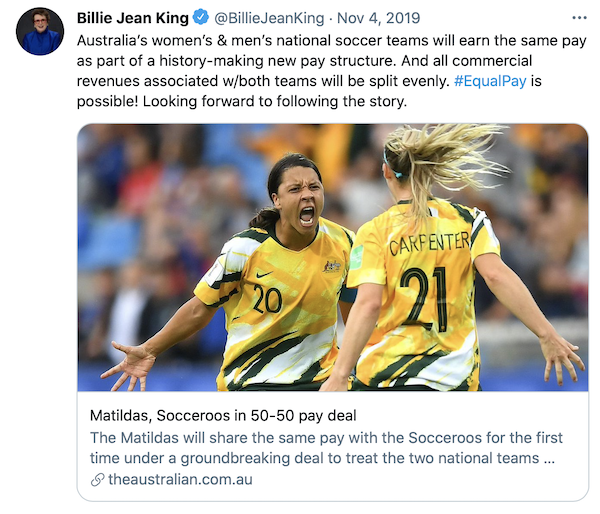 King surely had no way of knowing that those deals call for men’s and women’s teams to receive equal percentages of the prize money they earn in international play, not equal dollar amounts. If you include the bonuses for the Victory Tour, which are paid on top of regular game fees, the women already get close to 100% of FIFA’s prize money. The men do not.

Cone and Wilson were asked on Tuesday’s call whether they would consider an Australia-style deal. They said they’d be open to it. You could practically hear them suppressing the word “YES!” If you applied the MNT’s bonus percentage to the WNT’s in their back pay lawsuit, the WNT might actually need to write a check to Soccer House.

Also suckered into the WNT’s sloganeering was Michael Che, who teams up with Colin Jost and a group of sharp writers to produce the best Weekend Update segments in Saturday Night Live’s long history:

“The U.S. men’s soccer team failed to qualify for the Olympics for the third time in a row. But fellas, keep your heads up and remember that, win or lose, you’ll always get paid more than the women’s team.” 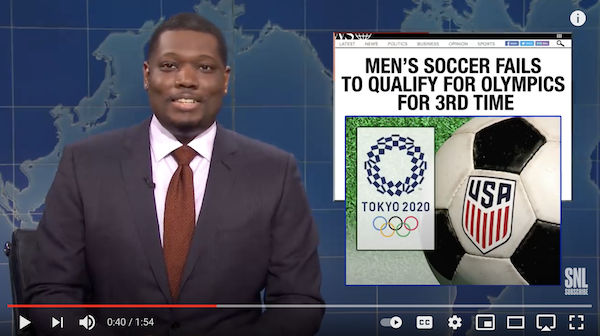 Except that the Olympic teams are mostly U-23s, the event isn’t covered by the men’s CBA, they would get nothing (aside from the USOPC’s bonus money) if they win, the WNT actually does make more money when they win a lot and the men lose a lot, and U.S. Soccer will be on the hook for $3 million ($1.8 million winner’s bonus, $1.2 million Victory Tour) if the women win the Olympics, which is roughly infinity percentage of the Olympics’ prize money.

Meanwhile, the women are squandering a chance for actual change. Cone should be a sympathetic listener -- she’s not in the Hall of Fame for her political or coaching careers. (The fact that a women’s national team legend didn’t immediately call off the federation’s lawyers and give in to everything the current generation wants should tell you quite a bit about what people think of the pay issue when they see the actual numbers and the big picture.)

The only positive outcome from all the scrutiny of recent years is that the two sides settled on the parts of the lawsuit relating to playing conditions, a tacit admission from the federation that they can, should and will do better. Those who cut corners on fields and airfare are all gone.

If ever the women (and men) had a chance to sit down and work out fair deals moving forward, this is it.

But the women aren’t moving forward. They’re focused on a lawsuit, which doesn’t appear close to settlement, that’s focused on the past. This isn’t about the next generation’s development. It’s about getting paid for what’s already been done.