Christen Press scored in first-half stoppage time and assisted on Lynn Williams' goal in second-half stoppage time as the USA finished a trio of WNT Summer Series games with another shutout victory: 2-0 over Nigeria. The 38th-ranked Super Falcons, like last week's foes -- Jamaica (4-0) and Portugal (1-0) -- did not qualify for the Olympic Games, for which the USA is prepping, but they managed to continually frustrate Coach Vlatko Andonovski's offense. 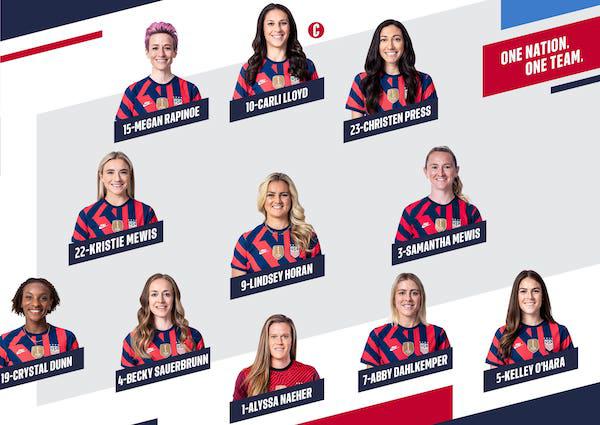 Alyssa Naeher's single save was a simple one. She punched away a corner kick to safety and handled a back pass well the only she came under pressure.

The backline didn't look quite as comfortable playing out the back as one would hope during a few phases when Nigeria pressed. Becky Sauerbrunn appeared in time on the rare occasions when Nigeria entered the penalty area. Abby Dahlkemper's accurate long-pass ability didn't make an appearance on this evening. The defensive work of outside backs Crystal Dunn and Kelley O’Hara was fine, but aside from an early foray when Dunn swiftly faked out a Nigerian defender near the corner flag, they failed to find openings, or passed poorly when they did.

Ever-present on both sides of the ball, Lindsey Horan contributed to both goals. Fortuitously on the first, when her hopeful long ball out of the back was headed into a fray that saw Kristie Mewis' header create a 50-50 ball that Carli Lloyd pounced on to poke the ball to Christen Press for the first goal. On the second goal, Horan found Press with a quick, crisp pass to create the perfect counterattack. Unclear was how outside midfielders Sam Mewis and Kristie Mewis were supposed to contribute to the attack. They seemed out of sync with Horan, and rare were the occasions when they combined sharply with the outside backs.

After a lively start, which included suffering a brutal foul from Rita Chikwelu in the third minute, Megan Rapinoe had an error-filled performance on the left wing, rarely connecting her passes. Late in the game, before finally serving a good short pass to Christen Press, she hit a cross and a shot into defenders standing yards away. Press scored with a well placed shot and assisted with pass perfectly placed into Lynn Williams' stride. Carli Lloyd shooting into the legs of her marker in the 44th minute was just one example of the Americans' propensity to pull the trigger before finding a path. Aside from her assist, Lloyd didn't trouble the Nigerian backline.

Bravo to Lynn Williams for providing a positive end to a frustrating game with a poised finish a few minutes after she replaced Rapinoe. She also took part in the buildup, having retreated 30 yards in her own half to take a pass from Catarina Macario and stroke it to Horan before blazing upfield to receive Press' service. Taking part in that counterattack was the highlight for Macario, the squad's youngest player, who came on in the 61st minute but failed to find her niche in the midfield. A scoring chance for her ended when the ball bounced onto her arm. The one Alex Morgan shot that reached the keeper had no power on it and one before that was snuffed by a defender. The veteran was also hasty with her passing in a game desperate for composure amid a crowded defense.

TRIVIA: In her last 36 games, Christen Press has been involved in 34 goals, scoring 14 and assisting on 20.

NOTABLE: Nigeria head coach since October is Texas native Randy Waldrum, who is also currently head coach of the University of Pittsburgh. The former Notre Dame head coach had a stint at Trinidad & Tobago's helm in 2014-16, when he also coached Houston Dash (NWSL). Waldrum's assistant with Nigeria is Lauren Gregg, who served as Tony DiCicco's assistant when the USA won the 1999 World Cup and 1996 Olympic gold medal.