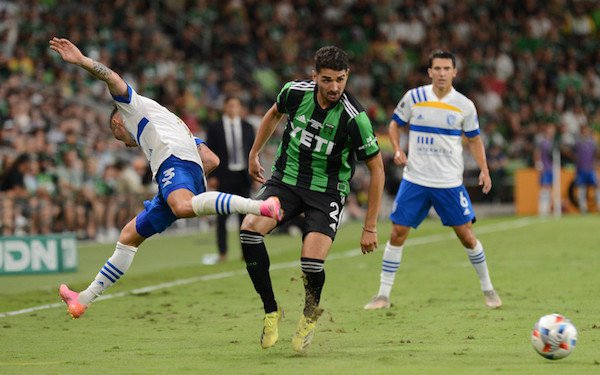 Austin FC had to settle for a 0-0 tie with the San Jose Earthquakes in the MLS expansion team's first game at new Q2 Stadium.

Before the game, fans in the sell-out crowd of 20,738 were treated to actor Matthew McConaughey leading them in chants of "Verde! Listos!”

McConaughey, an Austin FC co-owner, and the fans were ready to celebrate, but Austin FC's attack continued to struggle, going without a goal for the fourth time in its last five games.

Diego Fagundez, who scored Austin FC's first-ever goal in April, said he got chills as he stepped on the field before the game.

"It was something special," he said. "I know [the fans] have been working so hard for it. I know the whole team was ready for it and it's kind of sad that we're leaving with a tie because we pushed so hard, they were singing so hard, and we wanted to give them more. But it's like we said, this is just the beginning."

Forward Jon Gallagher said he could feel the energy in the crown.

"From every chance, every little pass, every good moment you could feel them," he said. "It was really hot out there and a lot of guys were struggling with cramps and at those times, that's when [the supporters] really pick you up. Most of the game they were banging the drum, they were singing and I'm like, 'I don't know how these guys are still going, they must just as tired as myself.'"

The closest either team came to scoring was in the 36th minute when Argentine midfielder Cristian Espinoza hit the outside of the post for the Earthquakes, who picked up their first point in five games with the draw.

San Jose coach Matias Almeyda said he enjoyed being part of the opening of the new stadium.

"I liked the stadium and how the fans supported their team," he said. "It was a day of football joy."