The second round of games in the 2021 (née 2020) European Championships brought a curious mixture. The highlight was Germany’s stimulating 4-2 victory over a by no means outplayed Portugal, and Belgium’s second-half comeback against a Danish team that had almost run them off the park in the first. There was a fair share of tedious stalemates too, with goals in Group D as rare as yellow cards for dissent -- my only criticism of the referees in what so far has been a competently officiated tournament.

While Germany announced its return with a superb display of positive passing soccer both through the middle and down the flanks, and Italy, the Netherlands and Belgium all registered second (if not always seamless) wins, other co-favorites England and France faltered with ties against unfancied Scotland and Hungary, respectively. Struggling Spain, meanwhile, failed to win in Sevilla for the second successive game.

There were fewer stories off the field, thankfully, though there was one case of COVID, in the Slovakian squad. UEFA let London know that without a quarantine-free pass for its 2,500 free-loaders and functionaries, they might just move the final from Wembley to Budapest, where the authoritarian, far-right government of Viktor Orban continues to ignore all pandemic protocol and allow almost capacity crowds. That’s great for the TV cameras and garnering populist approval, but a wilfully myopic approach to an infectious global disease that’s still far from beaten.

Italy swaggered into the last 16 with another convincing 3-0 win, though there are still doubters claiming they have yet to play a 'big' team. Well, that chance will presumably come, but in the meantime there's so much to like about their spritely attacking play, backed with exemplary defending. There's thankfully little of the melodrama of past Italian sides too, so credit to Coach Roberto Mancini for focusing on winning games through playing soccer rather than conning or constantly remonstrating with referees. My view that Wales vs. Turkey was like one of those charity games where celebrities have a kickaround, with Gareth Bale starring as the only recognized soccer player, is very much in the minority. 'An exciting cracker of a game' was the general verdict. A low-quality slugfest that ended with a dumb brawl too leniently handled by the referee Artur Soares Dias. Switzerland will need a big win over Turkey and a Welsh defeat to Italy to make second place.
Standings: Italy 6pts, Wales 4, Switzerland 1, Turkey 0

Choice quote: "All good things come in threes." Aaron Ramsey (Wales), who managed to convert the third through-pass from teammate Gareth Bale after missing badly from the first two.

Finland vs. Russia looked like it was off to a flier when Finland took an early lead, but our old friend VAR measured it as a couple of millimetres offside just as the Finns were done celebrating. I can't stress often enough how much I hate it when that happens, so Lord knows what the Finnish fans felt like. That aside, there was one highlight of a really dreary game -- Aleksey Miranchuk's deft finish that won the clash just before halftime. Roared on by an emotional home crowd, Denmark came out firing in another intense and captivating game. After taking an immediate lead you always felt that they'd pay for not following up with a second goal as long as the Belgians were looking tentative and disorganised. Once Kevin de Bruyne came on at halftime, the game turned, and his classy assist and goal saw the Belgians through to the last 16. With a win over Russia in its final game, preferably by a few goals, Denmark could still progress.

Choice quote: Jan Vertonghen (Belgium): "We were one step too slow again and again, but when de Bruyne, [Axel] Witsel and Eden Hazard were subbed in, the game changed. There's no disputing it, they bring an extra level of quality." 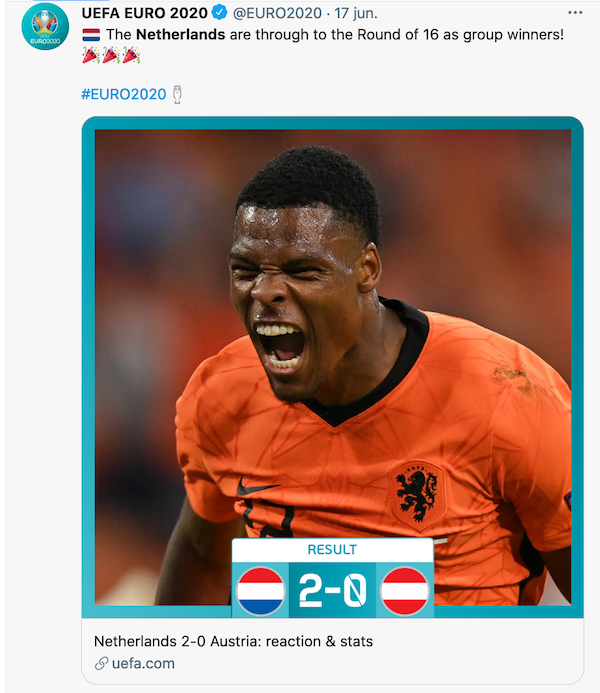 North Macedonia is the first team eliminated as it can no longer finish third, but they acquitted themselves well after falling behind 2-0 to the dominant Ukrainians after 35 minutes. Ezgjan Alioski fired home the rebound from his own missed penalty to half the deficit. After the Ukraine's Ruslan Malinowski became the fourth out of five players to miss spot kicks seven minutes before end, North Macedonia almost leveled at the death. Another good game. The Netherlands and Austria seemed more interested in kicking each other than scoring, with the Dutch especially negligent in front of goal. My new favourite player Denzel Dumfries was involved in both goals -- he drew the foul for the penalty that Memphis Depay converted (finally!) for the go-ahead goal, then scored for the second game running at the end of a Dutch counterattack that killed off the scrappy, mediocre Austrians. 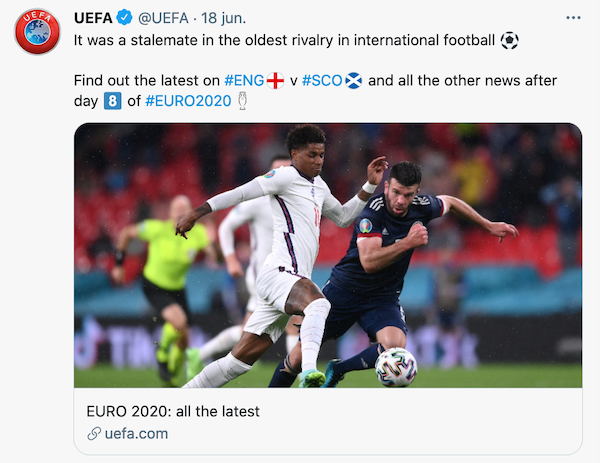 Two games, two goals, (one a penalty kick that probably would never have been given had Patrik Schick not come out of an aerial challenge with a bloody nose), and the only moment of inspiration came from Ivan Perisic’s cogent finish after a quickly taken free-kick. Coaches, study that free kick -– teams would score so much more often from dead-ball situations if they didn’t dither so long in taking them. Otherwise, it was a day of meager thrills in Group D. Some Scotland fans were overjoyed after ‘beating’ a static England side 0-0 at Wembley, but celebrating one point from two games, having scored no goals, has an air of desperation about it. Still, they’re still in it, as is Croatia, so we’re set for a do-or-die group finale in Glasgow – a draw will be of no use to either team. England and the Czechs are as good as through.

Choice quote: Scotland captain Andy Robertson on 20-year-old Chelsea midfielder Billy Gilmour, who won the MVP trophy after the England vs. Scotland game: “Nothing fazes him. That’s why I believe he can have as many caps as he wants for Scotland. He’s got a huge future ahead of him, but the here and now is pretty good as well.”

Sweden labored again for 45 minutes against a Slovakian side happy to settle for a point after having won its first game, but in the second half the Swedes finally remembered the point of soccer -- to score goals. They largely failed at that, despite several promising moves, until Emil Forsberg converted a penalty late on that now flatters them with four points. Spain was again wasteful in front of goal, this time against a more determined and physical Polish team in a fractious match that seemed to mainly consist of ugly challenges and a slew of yellow cards that came too late to save the game. Typical of Spain's tournament so far -- at 1-1 they eked out a penalty kick that Gerard Moreno struck against the post. Following up with the whole before him, Alberto Morata managed to skew his shot hopelessly wide. Still, it makes for an intriguing final round of games with all almost all permutations possible.

Best performance: None come to mind.

Choice quote: Understatement from Sweden coach Janne Andersson: “In the last seven games we’ve only conceded one goal. Nonetheless, we could have scored a few more.” 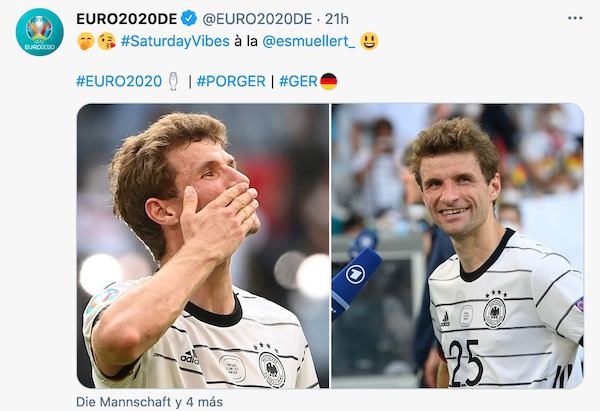 The German nation demanded changes from coach Joachim Löw, who responded by naming the exact same starting XI as against France. Same names, different team, as the Germans pressed from the start and refused to be cowed by an early Cristiano Ronaldo goal on the counterattack. An absolute belter of a game, the equal of Netherlands-Ukraine, though Germany’s defensive vulnerabilities remain clear for plotting opposition coaches to exploit. Earlier, Hungary was inspired by a full home stadium as they held reigning world champions France in Budapest, though the game -- furiously competitive as it was -- lived more from its atmosphere than its content. Most of the high points consisted of mediocre French finishing. Hungary may find its final game in Munich against the resurgent Germans more of a challenge without a partisan crowd behind it. Portugal vs France is, on paper, another promise of speed and drama unless both sides opt for a draw to conserve energy.

Choice quote: Attila Fiola, Hungary’s goalscorer against France: “After the goal my whole career flashed before me. Life is giving me something back.” The 31-year-old Fiola had missed Hungary’s Euro 2016 campaign due to injury.