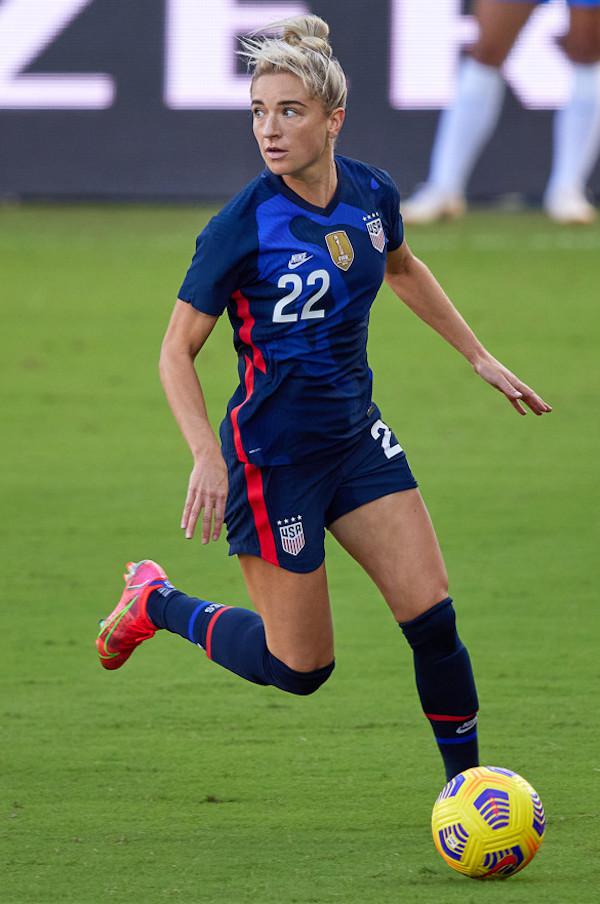 Vlatko Andonovski named the 18 players (plus four alternates) he will take to the Tokyo Olympics.

Only one player -- Kristie Mewis -- wasn't a member of the USA’s 2019 Women’s World Cup championship team.

The competition for roster spots was tight -- the 2019 World Cup team had 23 players -- with little separating players at several positions.

The selection process was complicated by knee injuries to two starters. Julie Ertz and Tobin Heath were both determined to be ready for the Olympics.

In the end, Andonovski took ...

-- Adrianna Franch over Jane Campbell as the backup keeper. Franch had been away from the national team for more than a year with a knee injury of her own, but her strong play for the Portland Thorns earned her the nod over Campbell.

-- Tierna Davidson as the third center back. Davidson is another player who came back from injuries. She is one of three players who were not on the 2020 Olympic qualifying roster along with Alex Morgan (on maternity leave) and Mewis who earned tickets to Tokyo.

-- Emily Sonnett as the extra outside back. Midge Purce, who also played as a winger, and Sonnett, who can both both outside back positions and as the holding midfielder, were recently battling to make the team as cover.

-- Mewis over 21-year-old Catarina Macario as the fifth midfielder. Mewis, Sam Mewis' older sister, made her first roster at the age of 30 for a world championship eight months after her return to the national team. She had played for Andonovski in the NWSL, drafted by   FC Kansas City out of Boston College in 2013, but went more than six years between national team appearances before her return in November 2020.

“For Kristie, she is a product of NWSL," Andonovski said bring a media call. "She played extremely well in the league in the last year and a half or so, earned herself an opportunity. Then after the opportunity was given to her, she took full advantage of it. Every game that she came in, whether it was 5 minutes, 10 minutes, 15 minutes, she maximized that opportunity and continued growing and developing in the league and performing in the league.”

Macario had a strong run in late spring for French club Lyon but she was not as consistent as Mewis was in her national team appearances. It hurt the Brazilian-born youngster that she missed the two April friendlies in Europe because of a COVID-19 outbreak at Lyon that forced her to quarantine.

“Catarina is an exceptional player,” Andonovski said. “But other players were more ready than her for the Olympics. The fact that she’s an alternate will give her the experience necessary to see what it takes to compete on world stage. We expect her to be a main figure on this team for a long time.”

With Heath in the fold, Andonovski kept the five-player U.S. frontline intact even if its average age will be more than 34 when the Olympics start. He did not take Lynn Williams, Sophia Smith and Purce, all wingers.

"We know there are some very talented players that won’t be in Japan," said Andonovski, "but these were the difficult decisions that we had to make. We have a very experienced roster that has been through adversity at the highest levels."