Jovan Kirovski on Christian Pulisic following in his footsteps, his LA Galaxy director role, and his vision for MLS 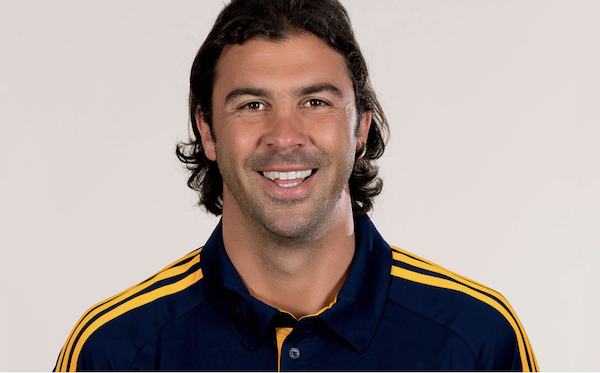 Being the first at anything is usually the result of skill, perseverance, a pioneering spirit and often, a stroke of good fortune.

Jovan Kirovski was only 20, younger than Christian Pulisic by two years, when he hoisted the legendary UEFA Champions League trophy in 1997. Though Kirovski’s contributions to the winning run of Borussia Dortmund were a modest pair of substitute appearances in the group stage of the competition, it was enough to stake his claim as the first American UCL winner, and the following season he became the first American product to score in the Champions League..

“I was just a kid, I didn’t really understand it all,” Kirovski, now technical director of MLS's Los Angeles Galaxy, reminisced. “It was a fantastic experience.”

Pulisic’s triumph with Chelsea this past May on the pinnacle of the world’s stage for club soccer, 24 years later, was as the second American male UEFA Champions League victor. The Pennsylvania product added the notable distinction of playing in the UEFA Champions League knockout stages and in the final game.

Kirovski wasn’t particularly bothered by any media, social or otherwise, that overlooked his earlier feat while caught up in the dazzle of Pulisic’s achievement at Chelsea. Kirovski enjoyed watching the match, happy to see another American hoist the same trophy he had once held aloft years ago. While Kirovski hadn’t wondered during his playing career time about how long it would take another American male to match or better his UCL accomplishment, he admitted the question had occurred to him more often since his retirement as an active player in 2011.

“Every time Champions League competition games would start, I’d think, ‘It’s going to be hard for another American to do this,’” Kirovski said. “It’s not so easy to go to a big club. The timing has to be right and so many things can happen.”

What’s interesting and exciting for U.S. national team fans at the moment is that as much as Pulisic is at the head of the American vanguard overseas and certainly the most high-profile, he’s not alone.

“In the last two, three years, there’s so many talented American kids at big European clubs, from Pulisic, (Weston) McKennie, to (Zack) Steffen to Tyler Adams,” Kirovski noted. “So it’s good to see.”

At only 16, Kirovski made the jump to Europe, specifically England, with Manchester United. He was a part of a notable generation of young Manchester United players that came up through the youth and reserve ranks, including David Beckham. Kirovski, who encountered U.K. work permit problems, switched to Germany, joining Borussia Dortmund. Born and raised in Escondido, California, Kirovski is of Macedonian heritage, though to his teammates abroad, his immigrant background barely registered.

“I was still American,” Kirovski laughed. “There weren’t many Americans abroad. There was Eric Wynalda, Kasey Keller, Claudio Reyna, very few. It was challenging. It was different. They’d say, ‘You play basketball.’ You had to prove yourself every day. You had to earn their respect. It’s a much different place now, because there are so many Americans that have gone over there and have been successful. There’s not as much of a, ‘Oh, you’re American!’ That’s great to see for the young kids.” 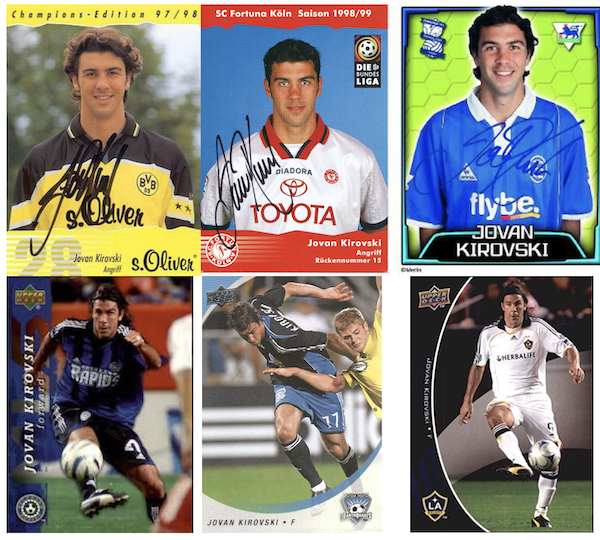 Southern Californian Jovan Kirovski, who left Nomads SC at age 16 to join Manchester United's youth program, made his pro debut Borussia Dortmund at age 20. His career in Europe included Fortuna Köln, Sporting Clube de Portugal, Birmingham City and Crystal Palace. In 2004, he moved to MLS, where his play for the Los Angeles Galaxy (2004-05, 2009-11) sandwiched stints with the Colorado Rapids and the San Jose Earthquakes. He stayed with the Galaxy as an assistant coach to Bruce Arena before taking the Galaxy technical director position in 2013.

While Kirovski’s first season at Borussia Dortmund was a whirlwind, he did his best to take in the Champions League adventure. “For me, it was just enjoying an experience, trying to be the best I can, every day.”

Over the course of his career, Kirovski’s stints at various clubs have led to connections that he still calls on in his work presently, and the bond with Dortmund remains both special and strong.

“It has helped me to be associated with this kind of club and the players that were there; it’s helped me in the job I have today,” said Kirovski. In his director role for the Galaxy, Kirovski visited Pulisic at Dortmund before the player’s Chelsea transfer. “Now Gio Reyna is there,” Kirovski said. “In my job, I’m in the mix, I’m in the trenches. I see these young players develop. There’s more coming, for sure. There’s so many talented players that you see in the national team now. It’s just the beginning of a new generation.”

Since the USMNT generation Kirovski was part of included a smaller number of European club players, he could recall distinctly specific instances when their paths crossed, including one of his first games in Germany:

“I was on the bench for Dortmund. Claudio (Reyna) was on the bench for Leverkusen. It was interesting to see another American there. We were actually pretty close. When I was at Crystal Palace, I played with Gregg Berhalter for a season. There were a few moments like that.”

Kirovski, who played for the USA at the 1996 Olympics, scored nine goals in 62 appearances for the full national team.

“The more (connections) you have, the more doors you open," he said. "I have players from my early days at Manchester United that I’m still connected with, also at Sporting Lisbon, Crystal Palace. Many of them are now coaches, sporting directors.”

The fact that the Galaxy was able to sign Zlatan Ibrahimovic was due in part to Kirovski. He has been able to explain in detail and with specifics from his own experience how MLS compares to Europe.

“I’ve seen the league grow into a place that is really positive,” Kirovski said, envisioning a point where the U.S. league not only continues to send young American talent abroad, but has the spending power and appeal to welcome some of them return. “I went over at 16, and at that point, they didn’t even have Major League Soccer, but I always had my eye on the league when it started, always thought it would be great to play in front of my family. So it’s likely many of these players would love to come home when it makes sense for them.” 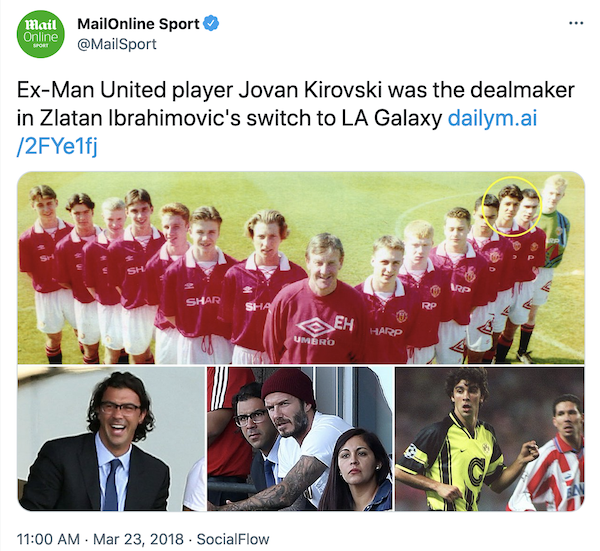 The hunger for glory abroad is an appeal Kirovski understands as well, however. There’s also a “steel sharpens steel” aspect he appreciates that’s involved in top organizations. “Any young player in a big club, you have to perform, you have to produce, to finally win the confidence of a coach,” Kirovski said, noting Pulisic has had to prove himself to both Frank Lampard and Thomas Tuchel. “You have to be on your toes every single day. In a big club, like Chelsea, there’s competition everywhere. It’s about producing, at the end of the day. The challenge is to stay positive. It’s a grind.”

The next challenge for Pulisic and Co., of course, is to restore the wounded pride of many in the United States soccer community who were shocked when the team failed to qualify for the 2018 World Cup.

“It was a major disaster,” stated Kirovski of the USA not qualifying. Yet he also placed faith in his former teammate, Berhalter, who now guides the squad, to turn things around. The USA recently claimed the inaugural Concacaf Nations League with a thrilling 3-2 win over rival Mexico.

“It’s only the beginning," he says. "We have a coach that gets it and he’s got players who have the talent to really connect with that vision. They’re all coming up at the same time, which could be something really positive.”

Due in part to the success so many Americans are currently having overseas, the Galaxy’s Sebastian Lletget was one of only two current MLS players, with Colorado's Kellyn Acosta, to see action in the win overtime win over Mexico.

“We've always had some great players contributing on the national team, like Cobi Jones (all-time leader in caps, 164), Landon Donovan (58 international assists, 57 goals),” said Kirovski. “It’s good to see Lleget in the mix.” Lletget and the rest of the USMNT, however, did not have to face his Galaxy teammate, Mexico’s all-time leading goalscorer, Javier “Chicharito” Hernandez in the Nations League final. Though he has been playing well for the Galaxy this season, Hernandez has not been called on in 2021 to play for El Tri.

“He’s been scoring goals for us; he’s been great for us,” Kirovski noted. “For his national team, they’ve struggled the past few games for goals, but that’s not for me to say (if Hernandez should be called in). We’re glad he’s here performing with us.”

In certain ways, Kirovski sees the future of MLS in general and the Galaxy in particular, as one that continues to combine homegrown and overseas talent, as well as triumphant homecomings.

“Every owner and club has their own model and ideas of how they should be working and what they want to achieve,” Kirovski explained. “It's important for the league to have ambitious owners, whether it’s us, Jorge Mas (Inter Miami) or the ownership group in Atlanta, which has been great. For us here, we understand winning matters. We try to work hard every day to be back where we need to be. Our coach is really one of the best in the country. Greg Vanney is someone who has roots with the Galaxy. We have a great energy in the club at the moment.”

Whether blazing a new trail for American players in Europe or drawing on old ties to bring dynamic players to MLS, Kirovski keeps cultivating possibilities to raise the level of the game.