Women's soccer has outgrown the Olympics 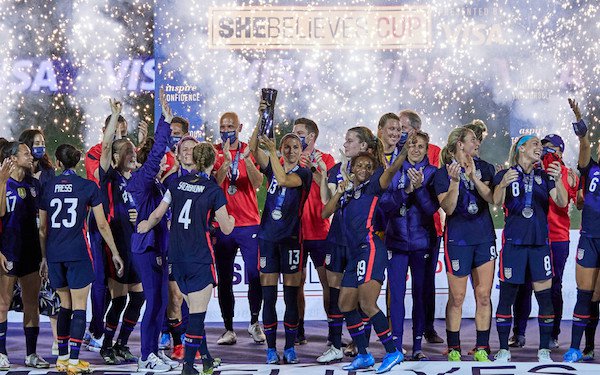 The U.S. women will head into the belated 2020 Olympics as massive favorites, even with a roster that reads more like a Hall of Fame ballot than a collection of the best current talent a country with a thriving development pipeline would offer.

The competition simply isn’t there. Literally. With only three slots available for European teams, the USA need not face second-ranked Germany or third-ranked France, countries that account for 23 of the top 100 players in The Guardian’s annual ranking. (The USA has nine players on that list, two of whom aren’t on the Olympic roster.) England will have to keep its chemistry while competing as “Great Britain.”

All 12 teams, along with their male counterparts, will be chasing prize money of $0. The U.S. Olympic and Paralympic Committee offers $37,500 per gold medal out of its own pocket, though its sponsors probably don’t mind. U.S. Soccer would be on the hook for $100,000 per player, $1.8 million total, along with a $1.2 million bonus for a four-game victory tour.

What if they could do better by not going to the Olympics?

It’s certainly a counterintuitive thought. Athletes -- or at least the associations representing them -- are falling all over themselves to get onto the Olympic program. This year, surfers, climbers and skateboarders will compete for medals and attention.

But that’s part of the problem. At the Olympics, women’s soccer is just one of 339 medal events. At the Women’s World Cup, the spotlight is all theirs.

Meanwhile, women have more outlets to play than they did a decade ago. The NWSL competes for talent with rapidly growing professional leagues in Europe. Having a World Cup Lite on a crowded Olympic stage the year after the World Cup just interrupts the NWSL for a second straight year and adds to the fatigue for the few European players who participate in international tournaments over back-to-back summers along with their fall-to-spring club seasons.

Without the Olympics, national teams would still have a void -- except in Europe, where teams can play in the Women’s Euro.

So suppose the rest of the world had something equal to the Women’s Euro?

One continent might not do the trick. Asia could put together a credible tournament with five top-20 teams (Australia, both Koreas, Japan and China). Concacaf, though, would have the USA occupying one tier, Canada occupying another, Mexico and Costa Rica in another, and then little else. South America isn’t quite there. Africa is sending 104th-ranked Zambia to the Olympics.

Uniting the Americas into a Copa America is an obvious decision, pulling Brazil and an occasionally competitive Colombian team alongside the USA and the rest of Concacaf.

But why stop there?

Why not have an Americas-Asia-Africa Women’s Championship? Market it as Triple-A if you like, glossing over the fact that inviting an Oceania representative (read: New Zealand, with Australia long ago bolting for Asia’s confederation) would be a good idea.

Now we’re talking about a decent event. Compare it with the 2020 (2021) Olympic field -- the Netherlands, Sweden and Great Britain would be out, but North Korea (ranked 10th), South Korea, Colombia and Mexico would be in.

This tournament could have 16 teams instead of the 12 in the Olympics. African and South American teams would have more opportunities to compete and grow the sport in their countries, and yet the field wouldn’t be too watered down.

Going strictly by FIFA rankings -- flawed, but the best measure we have -- and reserving at least two spots for each continent, we’d have the following:

There’s one more way to make sure this event gives women’s soccer more of the spotlight:

Hold it in December.

European clubs might balk at giving up some players for the tournament. But it seems only fair to have one event (World Cup) held during an NWSL season and another held during the European season.

December is generally a dead time for major events, with all due respect to the Famous Idaho Potato Bowl and the short-course swimming world championships. Weather won’t be an issue -- it’ll be summer in several of the eligible host countries, Tokyo temperature is pleasant, and Shanghai is similarly mild.

A Triple-A Women’s final could potentially have the airwaves to itself. In this year’s Olympics, the women’s final (11 a.m. Tokyo time, a relatively friendly time for Californians at least) will coincide with the women’s beach volleyball medal matches, women’s golf, women’s bronze medal field hockey (important in some areas of the world), karate, rhythmic gymnastics, table tennis and wrestling. If the game goes to overtime, it will overlap with a women’s volleyball semifinal. Had organizers scheduled the final for the Tokyo evening, it would have gone up against six track and field medal events, team handball, field hockey, karate, modern pentathlon, table tennis, volleyball, wrestling finals, and the women’s climbing finals.

The best part, as it relates to the women’s soccer pay dispute: Multiple confederations can pool resources to offer prize money, buoyed by what should be substantial broadcaster interest in the USA, China and surely a few other countries.

So instead of asking U.S. Soccer to pay infinity percent of nonexistent Olympic prize money as bonuses for the women’s team, the federation could pay 100% -- as it essentially does for the World Cup, when the Victory Tour bonus is included -- of what should be a prize pool rivaling that of FIFA, which tosses around cash for a great many things but is still miserly when it comes to women’s soccer competitions.

And if anyone misses the Olympics, just make sure the medals are nice as well.