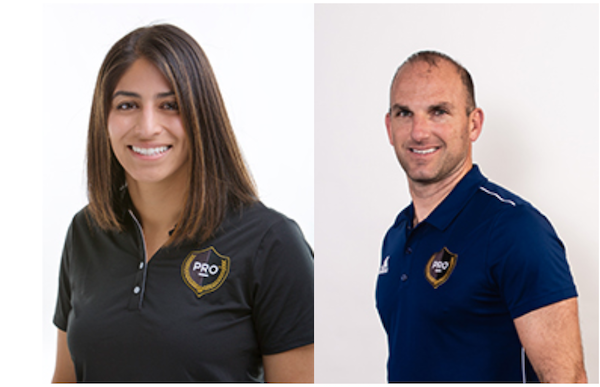 When MLS head coaches were given the chance recently to describe their reactions to incidents in actual league matches, they ranged from “no foul” to “red card with suspension.”

Ted and Christina Unkel are not surprised. It’s easy to comment on an official’s call, after the fact. It’s infinitely harder to make that call in the heat of the moment, as action swirls in a stadium packed with very competitive players, excitable coaches and amped-up fans.

The husband-and-wife team do that all the time (though not together). She has officiated at the NWSL, Concacaf youth championship and MLS (VAR) levels. She’s also a rules of the game analyst on CBS Sports. In her spare time, she’s a practicing attorney.

He’s a longtime MLS referee, with international matches to his credit.

Without referees, there would be no game. But the profession is often misunderstood, overlooked, even denigrated. The Unkels are passionate about officiating: its importance, the professionalism it demands, the opportunities it presents for young people.

Ted began officiating as a way to spend time with his referee father (and make money). Then Ted’s athletic and competitive juices kicked in. He wanted to advance as far as he could. Christina played four years of varsity soccer at Palm Beach Atlantic University before turning to officiating.

“We’re all insane. It makes no sense to ref,” Christina laughs. “Everyone in soccer says we have the hardest job in the world. But that still doesn’t stop them from criticizing us.”

She does not officiate for the glory. Or the money. “My day job has billable hours,” the attorney notes. “Every time I travel for a match or spend time recertifying, I lose money.”

What keeps her and Ted on the field is their love for the game. “When you lead teams out of a tunnel, and you hear the FIFA or national anthem, that’s a high you can never replace,” he says.

The other day, he worked an MLS match in Seattle. The stadium was only one-third filled due to COVID, but the fans’ slow clapping during the walkout was “unbelievable.”

Christina adds, “There’s the mental challenge of managing 22 players on the field. Everything we do affects all of them. We constantly make decisions, and not just about fouls or throw-ins. Where do I go next, so I can be in the best position for the play that follows after that?”

A decision made in the second minute – to whistle a foul or not, caution a player verbally or pull out a card – affects the next 88 minutes.

“Was that first tackle too hard? Too late? Borderline? Or really OK?” Ted asks himself. “Whatever I do, I’ll live with those consequences the rest of the match.”

He has only three tools: a whistle, a yellow card and red card. He can use his whistle as often as he likes. The cards -- not so much.

Christina, he says, has an uncanny ability to “weave and bob through all those players” – and the coaches on the sideline – while emerging at the end without showing a red card.

She does it using people management skills, and her knowledge of the Laws. CBS Sports viewers admire her ability to not only apply the rules, but explain them in layman’s terms. “As long as there are handballs, I’ll have a job on TV,” Christina jokes.

In addition to people management, soccer referees must manage their time. Fortunately the couple – who also have a 5-year-old at home in Florida – understand each other. When Ted has an MLS match, he flies out the day before, then returns the day after. A World Cup or Concacaf qualifier involves four days. The Gold Cup can take three weeks – four, if there’s a pre-tournament seminar.

“Some spouses are unforgiving if the other misses dinner for work,” Christina says. “We understand what this is all about.”

Christina – who earned her FIFA badge while in law school -- dismisses “the myth of work/life balance. That implies there’s an equilibrium. There isn’t. If I’m litigating a case or at trial, I remind myself I’m stepping away from soccer. But then I’ll come back. I can’t be in one of my worlds for too long, or they’ll all fall apart.”

They provide other sources of support. The other day, Ted made three tough decisions in an MLS game. He was almost certain they were right, but the entire stadium disagreed. Walking into his locker room, he saw a text from Christina. It was simple: three check marks. “That was the best feeling in the world,” he says.

“We don’t talk about soccer all the time,” Christina says. “We do have other lives.”

But sometimes it’s inescapable. Their honeymoon was delayed by a day, when Ted worked his first televised MLS match. They spent their honeymoon night in a Chicago Holiday Inn Express. But, she says, “we did get nice cards from both teams.”

Those relationships are important. The soccer community is a tight one. Despite criticism, Ted says that everyone – players, coaches, officials, administrators, journalists – appreciates the role everyone else plays.

It would be nice though, Ted adds, for U.S. Soccer’s board of directors to include a referee. “We need a voice at that table,” he says.

The couple credit mentors who advised and inspired them, when they were young. They worry that the current supply of officials will not be enough to satisfy the demand, especially as leagues like MLS expands, and the USL adds VAR. Youth players do not see officiating as rewarding, or a viable career path.

“I get it,” Ted says. “I have a security team. No one is coming after me. But when a kid steps on the field for their first game, there’s only a white line separating them from fans. That’s a tough place to be.”

He knows that, deep down, the other three parts of soccer’s four-legged table – players, coaches and spectators – appreciate referee, even without fully understanding them. Yet that does not keep them from criticizing officials. It’s part of the game, Ted knows.

He also knows that attackers miss sitters. Keepers bobble balls. A team with a pass completion rate of 62 percent can still win a game. “If I was good 62 percent of the time, I’d be out of a job.”