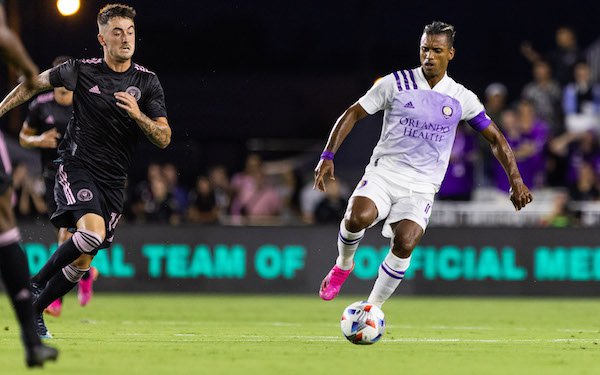 The past week was the first of seven weeks during which there is a full midweek schedule of MLS games -- 13 games plus one bye -- giving most teams three games in a week.

The congested schedule is a test of a team's depth and can quickly change the state of the races in the two conferences.

Orlando City (9 points) was the only team to win all three games and moved into second place in the Eastern Conference, just two points behind New England with a game in hand. Nani scored in all three wins, while Daryl Dike had his first two goals since his return from Barnsley. The three wins gave the Lions their first nine-point week in their six MLS seasons.

Seattle (7 points) and New England (6 points) held on to the lead in their respective conferences. The Sounders won a pair of 2-1 decisions -- the big one at the LA Galaxy -- before settling for a 2-2 tie with Vancouver. The Revs won a pair of 3-2 games before falling at FC Dallas, 2-1, on Sunday night.

Minnesota United (7 points) was the only other team to earn at least seven of nine points and was the biggest climber, jumping six spots into fifth place in the Western Conference.

NYCFC (6 points), FC Cincinnati (6 points), Sporting KC (6 points) and the LA Galaxy (6 points) all won two of three games. For FC Cincinnati, wins over Chicago and Toronto FC marked the first back-to-back wins outside of the MLS is Back Tournament in almost two years and moved it within three points of the Eastern Conference red zone.

On the other hand, Toronto FC (0 points) fell into a tie for last place with Chicago (1 point) when it lost all three games.

Inter Miami (0 points) was the only other team to go without a point, dropping the two games it played.

San Jose (1 point) and Vancouver (1 point) both managed to take only one point from three games. The Quakes' 5-0 loss at Orlando City and 3-1 loss at home to the Galaxy left them with just one point from their last seven games. The Whitecaps' 2-2 tie at Seattle on Saturday was not enough to keep it out of the Western Conference basement, which FC Dallas vacated.

Troubles for Atlanta United (2 points) and Austin FC (2 points) continued. The Five Stripes are now winless in their last five games, while Austin FC is winless with just two goals in its last eight games.