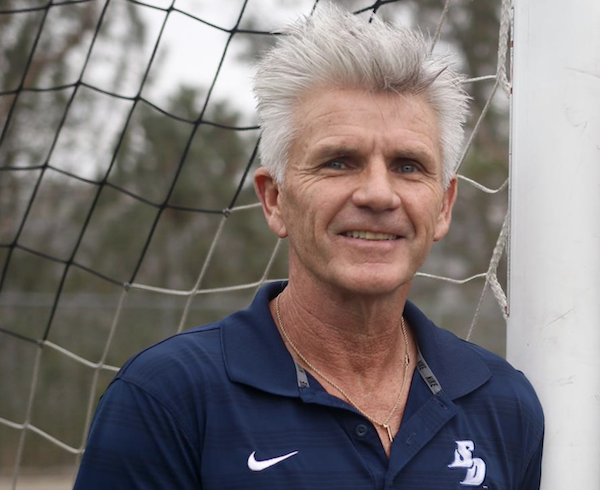 The USA may have won the Gold Cup six times, but its first one was extra special. Thirty years ago this month, one year after losing all three of its games at the 1990 World Cup in Italy and three years ahead of hosting the World Cup, Coach Bora Milutinovic guided the USA to its first championship title. In group play, the USA beat Trinidad & Tobago, Guatemala and Costa Rica. It beat Honduras in the final after a semifinal that marked its third win over Mexico in 29 meetings dating back to 1934.

A key to the team's success was Milutinovic's introduction of a few veteran players into the squad of players mainly in their early 20s whom Bob Gansler brought to the 1990 World Cup. The newcomers included Brian Quinn, a Belfast-born midfielder who moved to the USA from Everton at age 21 and became a naturalized U.S. citizen at age 30, four months before the 1991 Gold Cup. 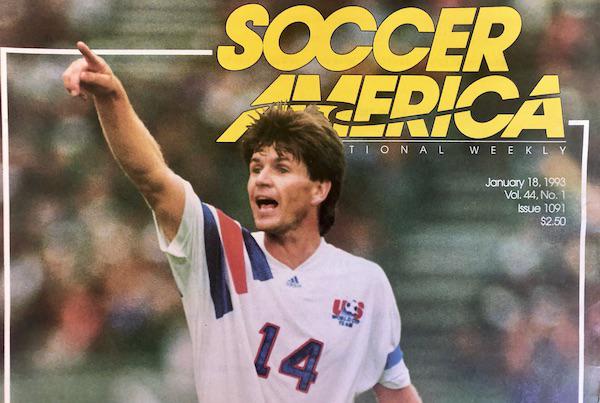 SOCCER AMERICA: A decade after you arrived in the USA to play for the NASL's Los Angeles Aztecs, you ended up on the U.S. national team. ...

BRIAN QUINN: It wasn't on my radar to play for the U.S. national team, but I had gotten my U.S. citizenship for other reasons in April of 1991. I just came off winning the indoor championship with the San Diego Sockers, got called into camp, and really didn't know what to expect. The reality was Bora liked me right away playing-wise.

SA: How did the call-up come about?

BRIAN QUINN: I guess Bora was scouring the country for any other players to come into the mix. John Kowalski, who was assisting Bora at the time, had been involved in the indoor game for a long time. Apparently he threw my hat into the ring.

SA: What was it Bora liked about your play?

BRIAN QUINN: I was 31. My game was formed, you know what I'm saying? It wasn't like I was going to reinvent the wheel. I fitted in with what he was trying to do. It was along the lines of get it, play it, move it, get it to the forwards. Let [Eric] Wynalda get it in front or behind. Get it to Hugo Perez, Bruce Murray, Chris Henderson. ... 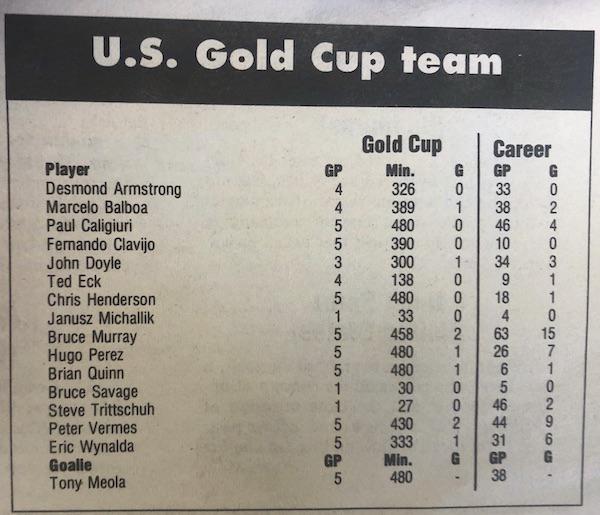 Brian Quinn was one of five players who played every minute of the USA's 1991 Gold Cup games. He scored in the 3-0 group-stage win over Guatemala.

SA: I imagine Bora figured the young team could benefit from veterans such as yourself and Fernando Clavijo ...

BRIAN QUINN: When I look back, I realized the key factor was that I was used to winning. In indoor soccer, our team [the San Diego Sockers] had won the championship seven out of the last eight years. When I played outdoors in the middle of that, with the Hamilton Steelers [Canadian Soccer League, 1988], we got to the final and lost to an unbelievable Vancouver team. I was always used to competing and being on winning teams. I didn't think about things like, this is Mexico, we haven't beaten them. I went out and expected to win every single game. Let's get to the final. We have to win.

SA: How were you received by the young guys?

BRIAN QUINN: Really, really fondly. I was an older guy. I'm married with five kids. We were at different stages in our lives, but it was real simple: Give me the ball, make the run, and I'll get it back to you. It was fun. It was really enjoyable. Fernando Clavijo and Hugo Perez, my Sockers teammates, were already there. And I struck up a wonderful relationship with Dominic Kinnear. 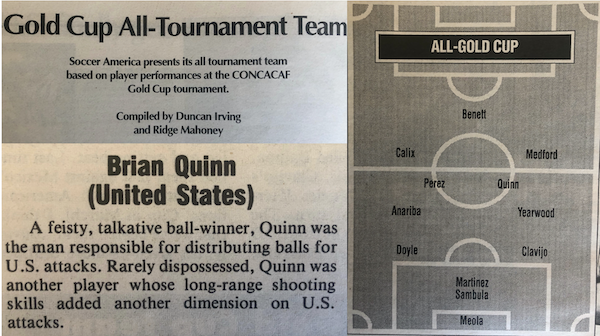 After going pro with Larne in Northern Ireland, Quinn moved to Everton. When his contract was up for renewal, before he had broken into Everton's first team, Northern Irish coach Brian Halliday, who had immigrated to the USA, convinced Quinn to move to the NASL. He scored twice in 22 appearances with the Los Angeles Aztecs, who folded after that season. After two seasons with the NASL's Montreal Manic, he moved indoors with the San Diego Sockers, with whom he played a decade of indoor ball and one season (1984) of outdoor NASL.

SA: What was it like when you first arrived in te USA as a 21-year-old player?

BRIAN QUINN: The coach was the Brazilian Cláudio Coutinho. It was a similar situation as what would happen with Bora. He liked how I fitted in with the skillful Argentines, Brazilians, and the Yugoslavian guy Dragon Simic.

SA: Back to your national team experience. Bora didn't pick you for the 22-man 1994 World Cup roster. But I remember seeing you going to the the USA-Romania game at the Rose Bowl, wearing the U.S. jersey to cheer on the team, with your oldest son. You certainly didn't seem bitter about it.

BRIAN QUINN: Obviously, I was disappointed. That's something that everybody dreams off. I was one of 30 guys who had been in [full-time U.S. camp] Mission Viejo on and off. Great players like Tab Ramos, Roy Wegerle weren't there because they were playing in Europe, who deservedly needed to be in the squad.

I'm not going to diminish that disappointment, but my perspective was I wasn't going to take the joy away from anyone else who made that team, because I was one of the final two or three cuts. We all know the story about Jeff Agoos being so disappointed he burned his uniform. Peter Vermes didn't make it, Desmond Armstrong didn't make it. John Doyle and Dominic Kinnear didn't make it. So many good players didn't make it. Who am to begrudge anyone for making it? All the 22 guys that Bora chose deserved to be there. They were all worthy. It would have been a magnificent end to my career but I wasn't going to be envious of anyone else because they all deserved it.

For me playing on the national team was probably the three most exciting years of my professional career.

BRIAN QUINN: Yes. My oldest son and I flew to Detroit to watch the U.S. opening game. Fantastic. First ever World Cup games indoors [Silverdome].  Wynalda scored the goal [1-1 tie]. The day before they let me and my son attend national team practice, which was very gracious of them.

SA: When did you decide you wanted to go into coaching?

BRIAN QUINN: A couple things happened. As captain of the Sockers, I was put into a leadership position. And when we were based in Mission Viejo, we all had the opportunity to take coaching classes from under Timo Liekoski. I signed up for that and enjoyed it. I had already been coaching youth soccer, helping out with Poway Vaqueros while I played for the Sockers. In 1994, after the World Cup, I got my B license, then proceeded to get my A.

SA: What was the coaching like for you when you played youth soccer in Northern Ireland?

BRIAN QUINN: I had very little coaching until I was probably 16. We had guys with a love for the game. They would pick teams, set up 5-asides, set up shooting excerices, put 11 guys on the field and have us figure it out.

SA: How did you approach coaching youth soccer?

BRIAN QUINN: I always went by the mantra, one kid, one ball. I felt the basis of the game was the more touches on the ball, the more excerices with the ball gives you the foundation to be a good player. As opposed to, I'm going to talk a lot and you're going to listen a lot. I never got into that. What I looked for is how often and how many times can you be involved touching the ball. The younger, the more time with the ball you need.

SA: How beneficial is having been a player?

BRIAN QUINN: It's a big advantage, especially on the technical side. We can demonstrate. Coach by osmosis. They see us controlling the ball, passing, chipping, bending it.

SA: Since you started coaching American youth soccer three decades ago, what differences have noticed?

BRIAN QUINN: There are different layers. The kids are way more advanced at 8, 9, and 10. You're probably teaching kids at 8, 9, and 10 what you were teaching 13-, 14-year-olds 30 years ago. The second one is, with the advent of digital TV, streaming, YouTube, the kids are watching soccer from all over the world. They're tuned in. They know the players. There's been proliferation of kids supporting teams, wearing their shirts, that's increased a 100-fold. And kids are also more likely to be watching high-level soccer live. Soccer on TV is fantastic, but actually going to the game, you're seeing the movement, you're seeing how teams squeeze up, how people break down teams. Watching the spacing, the tactics, the combinations -- that's very important to understanding the sport and learning from it.