Euro 21, semifinals: And with one final dive, England makes the final!

The Euro 2021 semifinals provided two contrasting games. In terms of quality, Spain against Italy on Tuesday saw two of the best teams in the world stage a game that would have made a fine final. Spain certainly deserved to go through on the night, Italy is worthy finalist based on its performances throughout the whole tournament. Wednesday's game was more of a typically tense but less cultivated knockout game. England was the better side, but needed an extremely dubious penalty decision in overtime to nudge it over the line. Full impressions below.

It's England's first ever European Championship final, while Italy has not won the competition since 1968. The game will likely see the competition's two toughest, meanest defenses squeezing the life out of their opposing attacks. Although offense has been the emphasis of almost every team in this magnificent and absorbing tournament, it's hard to believe that -- with so much at stake -- either side will not place caution to the fore on Sunday. Italy will adopt the approach it took against Spain by absorbing the pressure, waiting for the mistake, and pouncing on the counter. England will pass it around the back, probe through the flanks and the midfield, and eventually pin their hopes on Harry, either Kane or Maguire, getting their heads on free kicks and corner kicks. Raheem Sterling, Bukayo Saka or maybe Jadon Sancho will run at the experienced Italian defense, but there's little guarantee they'll find a way through. It will be tight and tense, but probably not one for the connoisseurs. 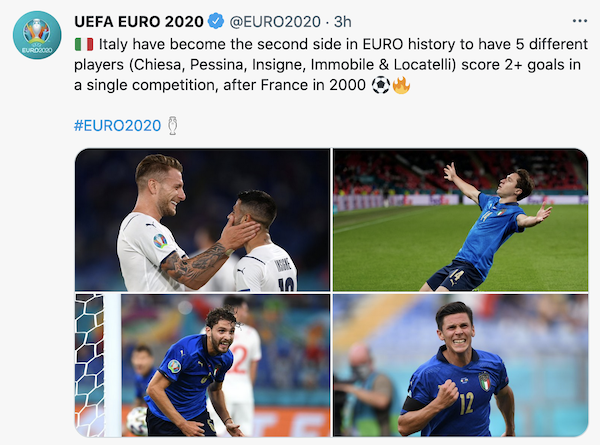 Spain 1 Italy 1 (3-5 after penalty kicks)
Feverish pregame text messaging across Europe with old friends. Who are you for? Historically, sympathies have always been more for the Spaniards, mainly due to Italian defensive tactics and rampant gamesmanship, but we all agree that there's something special about this Azzurri side. "I've been enjoying Italy right from the start," I write, "and there aren't many tournaments when I've been able to say that." Ever since his goal against Austria in the round of 16, I've had a sporting crush on Federico Chiesa the like of which I haven't felt since Gheorghe Hagi and Hristo Stoichkov set USA 94 alight. And I want Giorgio Chiellini to be my uncle, even though he's almost 20 years my junior. The genial guy who always shows up with a smile and makes you feel better about yourself and the world around you, and the fact that you'll be spending all weekend at a family wedding.

As we'd hoped, and now almost come to expect in this tournament, another intensive, high-paced game unfolded where it was hard to take your eyes off the action for a single second. Although the Spanish were dominating play and possession, it was Italy that looked more dangerous when it actually had the ball. In the first half, the superb Dani Olmo had Spain's best chance, but the gargantuan Gianluigi Donnarumma dived and saved. "Olmost!" I texted into the group, and the group advised me to stop texting and get a job on a UK tabloid. Emerson struck the Spanish woodwork on the stroke of halftime.

As the second half passed, Spain remained way ahead on possession, shots on goal, corner kicks and passing accuracy. But all that don't mean a thing when your opponent goes up the other end and scores, as Italy did on a textbook counterattack starting with Donnarumma's swift under-arm throw to initiate a five-man move that ended with Chiesa's measured, powerful finish. To everyone's amazement, Italy didn't start time-wasting, shin-grabbing, head-clutching and rolling around on the floor in death throes as seen at the end of the Belgium game, maybe sensing that German referee Felix Brych is not the kind to tolerate such nonsense (one glance from Brych is enough to terrify most players, unless you're Pepe). Our chat group had been calling for the inexplicably dropped Alvaro Morata since halftime. We got our wish, he got his goal with 10 minutes left after several chances at both ends, and now it seemed like Italy -- co-favorites for the best part of three weeks -- were hanging by a thread and barely resisting their opponent's renewed momentum. Spain then twice came close to the winner before the 90 minutes were up.

In the first period of overtime, Spain continued to take the initiative, and the Italians looked bushed. The Spanish almost scored again during an almighty goalmouth scramble, yet Italy enjoyed a brief revival and a couple of half-chances before exhaustion set in across the board. The chat group general consensus was that Italy would win the penalty shootout because Spain had shot so hesitantly against the Swiss. When Unai Simon stopped Manuel Locatelli's low, tentative effort I typed, "[Expletive], hit it high and hard, it's simple." When Olmo blazed over seconds later, the sarcy replies flooded in. "You mean like that?" Federico Bernardeschi finally showed how it's done. Morata shot like Locatelli and with a short hop in the run-up, Jorginho finished the game off with the coolest penalty since Antonin Panenka won the 1976 final for Czechoslovakia against West Germany.

Really hard on Spain, but over the course of the tournament they'd won only one game over 90 minutes (Slovakia), one after overtime (the 5-3 classic against Croatia), and one after penalty kicks (Switzerland in the quarterfinal). You felt like they were one ruthless striker away from being the champions-in-waiting, but this is an evolving team that promises great things (or, in the case of the teenage Pedri, already has them), and brought a great deal of excitement and stellar play to the tournament.

Choice quote 1: "The opponent won, and it's irrelevant whether or not they deserved to. We have to make small children understand that you don't have to cry when you lose, but that you congratulate your rivals and try again in the next tournament." Spain coach Luis Enrique promotes a healthy attitude to defeat. Not just quote of the night, but quote of the tournament.

Choice quote 2: "We played a powerful opponent who in no way made things easy for us. We suffered, but we play and suffer together -- that's the amazing thing about this team." Jorginho, Brazilian-born but raised in Italy, and with Italian roots. Back in 2015, Italian coach Roberto Mancini had said such players didn't belong in the national team, but in the meantime has been enlightened. 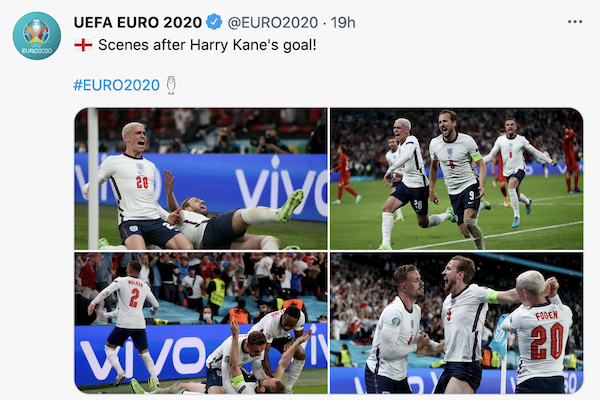 Denmark 1 England 2
If the previous night's game was top drawer international soccer, the Nordic element in the other half of the last four delivered what might have passed for a mid-table Premier League game. Burnley against Brighton, say. England created the best opportunities, but a lot of those chances came from corners and free kicks slung in to the heads of the two Harrys -- Kane and Maguire looked much more likely to score than Kalvin Phillips shooting from distance. That Raheem Sterling would be the key to finding a way through Denmark's doughty backline was always on the cards. I just didn't expect it to be via a blatant dive that hoodwinked gullible Dutch referee Danny Makkelie. VAR took a look, but somehow deemed that there had been contact, but it wasn't visible to my eyes until Sterling was already halfway to the floor. Luck stayed with the English as Kane followed up Schmeichel's save and gleefully accepted the second invitation to shoot into the empty goal.

The 'new England' ended up looking like the England of old. Long clearances out of the back, lots of huffing and running, poor technique, and a reliance on big lads getting their heads on the high ball. There were glimpses of the team that is finally catching up to the modern game, notably when Kane threaded a lovely pass to Bukayo Saka, whose cross forced Danish captain Simon Kjaer into the tournament's 11th own goal. That equalized Mikkel Damsgaard's ripe and ripping free kick (the first direct free kick goal of Euro 21!) that had given Denmark the lead after half an hour and finally brought the contest to life. The Danes at times played some neat passing soccer, but only in short phases. By the end, they looked physically and emotionally shattered, but all credit to them for recovering with such immense spirit after the trauma of their opening game against Finland.

MVP: Kasper Schmeichel (Denmark). The keeper kept his country in the game with several adept saves, and was unlucky that his block on Harry Kane's penalty kick went straight back to the English striker.

Choice quote: "First of all, there was a second ball on the field and normally that's classified as a disturbing factor for the players, so play should have been stopped. Then you can see contact between [Joakim Maehle's] knee and [Sterling's] calf, but Sterling goes into this challenge with intent [to get a penalty]. You can see that his body leans forwards. He wants to provoke the contact -- he wants to cheat a little bit, you might say." German TV refereeing expert Manuel Gräfe evaluates the game's key scene.