The Best of the Euro: Month of magnificence ends with deserving champ, our Best XI, top 10 games, and off-field winners

Euro 2021's month of magnificence ended at Wembley Stadium in London with a deserved champion. Italy's win on penalty kicks against England after a 1-1 tie belied its dominance both in this game and throughout the tournament -- from its steady and experienced defense, through a hard-working but creative midfield, to a forward line unafraid to run at back-pedaling defenders and finish its chances when it mattered most. Even in their one weaker game -- the semifinal against Spain -- the Italians persevered, held firm and played well enough to earn their shootout victory.

It's a squad bursting with varied talent, multiple characters and collective spirit, and unlike many Italian teams of the past it garnered the sympathies of neutrals. Even when we saw flickers of archetypal cynicism -- the odd nasty foul, or the time-wasting at the end of the quarterfinal against Belgium -- it was impossible to develop an enduring dislike of a team featuring the genial evergreen Giorgio Chiellini, the busy Lorenzo Insigne (one friend described him as "an electron of a player"), the colossal Gianluigi Donnarumma, and the sturdy, brilliant young striker Federico Chiesa. Jorginho and Marco Verratti in central midfield tirelessly held the whole unit together, Leonardo Bonucci was Chiellini Mark II, and Leonardo Spinazzola at left back might have won player of the tournament but for his injury in the quarterfinal.

And England? It was disappointing to see Gareth Southgate choose such a defensively oriented starting lineup for the final, but no one was criticising that choice when the two wing-backs in the 5-3-2 formation -- Kieran Trippier and Luke Shaw -- combined to give England the lead after two minutes. With a partisan home crowd behind them in the country's biggest game for 55 years, now would have been the moment to turn the screw and put the game out of reach by halftime. Instead, after a bright start, England sat back and allowed Italy to slowly take control. The visitors played the soccer, while England defended like Italians -- very well in the first half, but less so and with increasing desperation as the game went on. With so much young, attacking talent on the bench, it was odd not to see Jadon Sancho or Marcus Rashford brought on earlier to run at the aging, tiring Italian defense. Instead they were brought on cold two minutes before the end of overtime to take penalty kicks in the shootout. That these two excellent players, along with Bukayo Saka, were the three players to miss, triggered off a slew of vile online racist abuse. In England, as in some other countries, it doesn't take much to open the floodgates of toxic scum.

This is a very promising and talented England squad, however. After a fourth-place finish at the last World Cup, expect to see them in the latter stages of the next few tournaments, gaining more big game experience on the way. They may even make the final of a tournament played on foreign soil. 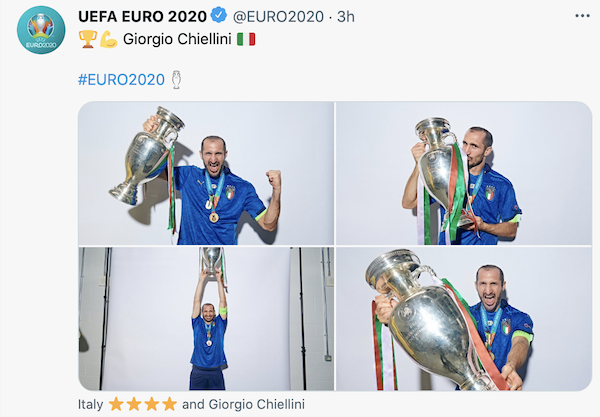 MVP: UEFA gave it to Leonardo Bonucci, and tournament MVP to Gianluigi Donnarumma. I would have opted for Federico Chiesa as MVP on the night as he was one of the only positive, probing players in an exciting but actually very poor game with few clear chances. My tournament MVP would go to Giorgio Chiellini, an indefatigable leader still standing, still winning, and still smiling at the end of a very long and challenging season.

Choice quote: "We’ve waited for a long time to make playing for England fun, to make it enjoyable. I think our players now have that. I think they’ve had a fabulous experience, they’ve loved the adventure. They’ve got a fabulous spirit, it really is a club-type spirit. All this team can go again, but the young ones are still years from peaking. We’ve got 18-, 19-, 20-year-olds who’ve done an incredible job and had a great insight into tournament football." England coach Gareth Southgate looks ahead.

Top 3 authoritarian regimes closest to UEFA, despite representing the opposite of its values:

2. Hungary -- government passed homophobic legislation during the tournament, while the notorious, black-shirted fascist Carpathian Brigade fan group were loud and visible en masse at all of Hungary's group games.

3. Qatar -- along with Gazprom (Russian, state-controlled) and Hisense and Tik Tok (both China), Qatar Airways was an official partner of the tournament. While preaching about respect and fair play and sporting values, UEFA will clearly take sponsorship from anyone if the price is right. At the weekend, the Süddeutsche Zeitung reported that the German soccer federation is also close to signing a cooperation deal with the airline that will see the team flown around the world for free (post-pandemic, Lufthansa can no longer afford this perk). This comes just months after German players lined up before a World Cup qualifier (host country in 2022 -- Qatar) in jerseys that spelled out the words HUMAN RIGHTS. 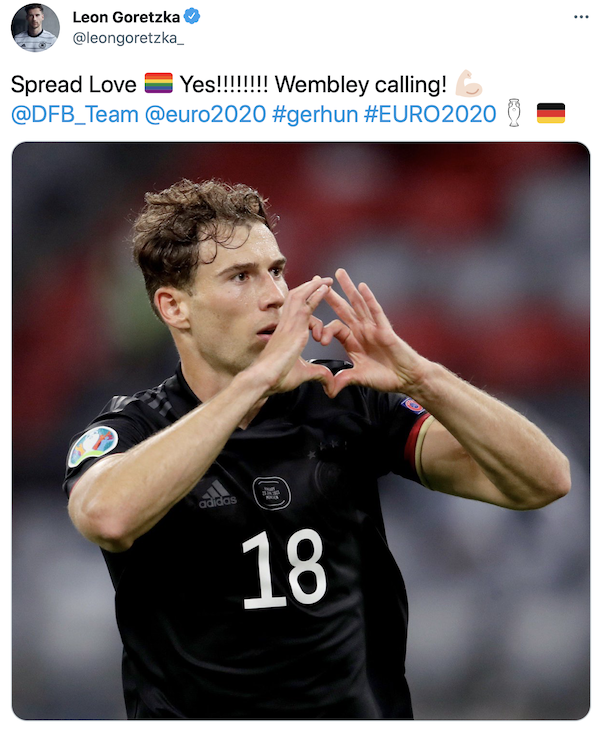 1. England's multi-ethnic team taking the knee before each game to show its support for the Black Lives Matter movement.

2. Manuel Neuer -- the German goalkeeper wearing a rainbow-colored captain's armband to demonstrate solidarity with the LGBTQI+ movement. UEFA 'investigated' this gesture and concluded that it was OK. Phew.

3. Leon Goretzka -- Germany may have been a relative disappointment on the field, but the midfielder spoke for many when he made the heart sign to Hungarian fans (see above) after scoring Germany's late equalizer in the group game in Munich.

european championship
5 comments about "The Best of the Euro: Month of magnificence ends with deserving champ, our Best XI, top 10 games, and off-field winners".
Read more comments >
Next story loading