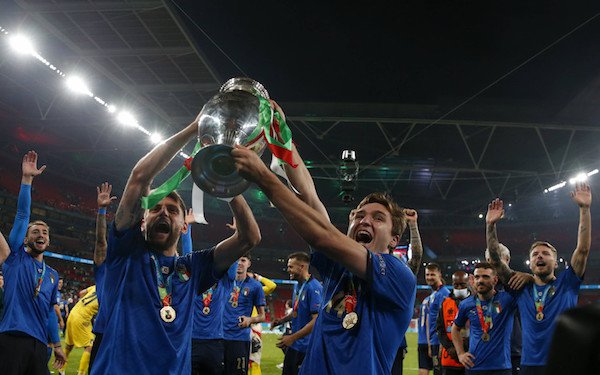 Last weekend was one the most-watched weekends ever for soccer on U.S. television outside the years with men's or women's World Cup finals.

Four big games were played, and here are the viewing audiences:

Only five network broadcasts last week drew more than the ESPN audience: the first three games of the NBA finals on ABC, "America's Got Talent” on NBC and CBS's “60 Minutes," but the combined audience of 9.4 million for the Euro 2020 final was higher than average of the three NBA games on ABC (8.97 million).

For non-World Cup soccer events, that combined audience of 9.4 million is only topped in recent years by the 9.8 million viewers on Univision and FS1 for the 2016 Copa Centenario final between Argentina and Chile.

-- The 2.9 million viewers on Univision are the most ever for a Euro match on Spanish-language television in the United States. Euro 2020 on Univision’s networks combined to deliver an average of 1.2 million across the tournament’s 11 televised matches. (Most games aired on the new streaming network PrendeTV.) In 2016, the tournament averaged just 186,000 viewers on ESPN Deportes.

Copa America final. Coverage of the Copa America final that ending with Lionel Messi winning his first senior title with Argentina delivered 3.5 million viewers on Univision, marking a double-digit increase over the 2019 final on Telemundo.

Gold Cup. The Gold Cup opened with 2.4 million and 1.3 million for Mexico-Trinidad & Tobago and USA-Haiti on Univision. In the case of USA-Haiti, it marked the largest viewership for a U.S. group match at the Gold Cup since 2015.

What's behind these significant increases in viewing for the Euro and Copa America tournaments (the NBA finals are down 34 percent for the first three games compared to the pre-pandemic 2019 finals)? Several factors are at play ...

1. The inexorable growth of soccer interest;
2. These were the first major soccer events available on networks or cable after several years of subsistence on pay streaming networks that have arisen (ESPN+, Paramount+ and Peacock);
3. In the case of Euros, it was the first major event with fans in stands. (That connection between fans watching in front of their television and those in the stands can't be overstated);
4. These were the first major events since most bars and restaurants re-opened fully and many fans felt comfortable gathering to watch them. (That social appeal encourages further viewing of other matches.)