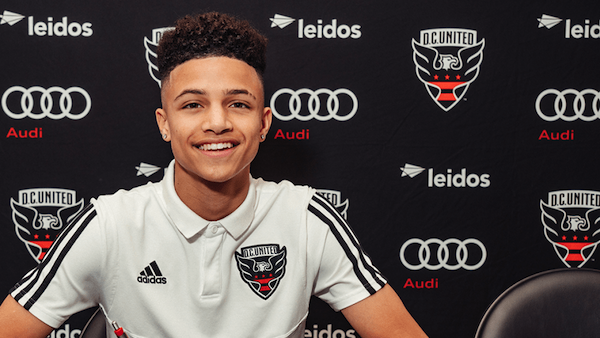 When MLS decided it wanted to invest heavily in player development well over a decade ago, it was always going to be a process. First there were homegrown initiatives, then there were academies, then there were facilities, and the creation of leagues for youth and reserve teams. Flash forward to 2021, the investment is starting to bear fruit in the form of impressive talent.

What separates 2021 apart from the previous years is that it clearly shows that this is not just the luck of a “Golden Generation” with a limited number of players. This is a sustainable process. First you had early homegrown players like DeAndre Yedlin and Matt Miazga getting sold. Then you had Tyler Adams, Zack Steffen, and Canadian superstar Alphonso Davies. Then you had Brenden Aaronson, Mark McKenzie, Bryan Reynolds. So far this summer, Tanner Tessmann moved Italy and it appears as if Sam Vines, and possibly Gianluca Busio and maybe Daryl Dike are to follow. Caden Clark is already set to move in January.

Despite that impressive departure of talent, the youth movement in MLS remains strong and it is spreading beyond youth friendly clubs like the New York Red Bulls, Philadelphia Union and FC Dallas. More teams are getting in on the act -- chiefly D.C. United which is now back on track after a slow start to the season and it is young players that are playing a huge role.

Kevin Paredes, 18, has been particularly eye-opening for United and has been part of the club’s recent rise up the standings. Having been developed as an attacking winger in D.C. United’s academy and with its USL team, Loudoun United, Paredes has added a defensive presence in his game under new D.C. United coach Hernan Losada -- which has implemented a high-energy pressing.

Last season, Paredes played 942 minutes for D.C. United in a COVID-shortened season that saw the club finish poorly and longtime head coach Ben Olsen lose his job. Losada came in from Beerschot in Belgium and demanded the players be on another level of fitness. Paredes, meanwhile, was injured to start the season.

Since his return, Paredes has been a huge boost over his seven appearances. In his four starts, his numbers are excellent. D.C. United has won three games, drawn once, and is yet to lose. Paredes scored his first goal in the most recent game against Toronto and that has put D.C. United just one point out of the playoff positions.

“For me it was more positioning-wise, getting used to this more defensive role,” Paredes told Soccer America. “Not just positioning wise, I was holding myself back too much last year. I was showing my creativity and showing what I can do, but I didn't really let loose. Maybe I was a little bit timid or nervous in some areas. This year I'm starting to get my stride.

“I'm starting to really like this defensive role, doing things at both ends of the field, getting up the attack, and then when it's time to close down on an attacker 1v1. I'm starting to get a lot more comfortable. I love tackling now.”

Paredes grew up in Loudoun County, Virginia, and both of his parents emigrated from the Dominican Republic when they were teenagers. Sports run in his family but not soccer. Both of his parents ran track and his father also played baseball. But once in this country, Paredes and his brothers decided to take different paths.

While Paredes lists Lionel Messi as his biggest professional inspiration in the sport given that he became one of the best players of all time despite a similarly small frame, he also said the environment he had with his older brothers helped turn him into the player he is today.

“As Dominicans, we all started with baseball,” Paredes said. “We just didn't like how long it was. We found soccer -- short, simple, and went with it. My brothers introduced me to the sport. It was very competitive among us three. We played a lot of basement soccer and that's where I get my 1v1 duel-winning. I look back on all that scrappy playing. I remember those basement times where it was a free for all. No rules, no nothing. You have to go in strong. I would say my brothers are my inspiration.”

Eventually, training became a lot more structured and Paredes showed enough promise to join the D.C. United academy. It was there when his career began to take off. During his time in the academy, he showed enough to train with the first team at very young ages. He struck up a positive relationship with U.S. national team winger Paul Arriola, who has served as a mentor to give him insight into life as a professional, the national team, and how to succeed in the sport.

Despite his small frame, Paredes never lost confidence in the path ahead.

“When I got my first invite to training and seeing these great players like [Wayne] Rooney, [Luciano] Acosta -- I felt a little nervous -- I wouldn't say out of place but I felt like I needed a lot of things to work on to become one of them. I was up for the challenge,” Paredes said. “Throughout the whole academy experience, sometimes I would be the underdog and that would give me motivation to work harder.”

When the league resumes after the current Gold Cup break, Paredes has clearly emerged as a player to watch in American soccer circles for many reasons. For one, he is now involved in a playoff push and an attempt to bring D.C. United back to being competitive in a league it once dominated.

There is also the topic of transfers and with Paredes playing well at such a young age, the interest he will get from European clubs will only increase as the months go by and as Paredes says: “I really want to make that jump one day.”

There is also the talk of the national team and that became relevant earlier this month when shortly after D.C. United’s last game, Paredes and fellow D.C. United teenage teammate Moses Nyeman were both invited to participate in training with the U.S. national team for its Gold Cup preparations.

That experience offered a boost in confidence to both players that they are on the radar and are on a pathway to potentially having an international future with the United States.

“I felt more comfortable heading over there,” Paredes said of the national team. “I was coming off a couple good games. I learned so much from the players in my position and other positions. Gregg taught me so much in the short few days I was there. He taught me so much and the belief and the strength that he gave to me, it was unreal. I didn't feel like I was the underdog, I felt like this is where I belong.”

This fall, the U.S. youth national teams will likely resume and the U-20s boast an extremely promising class led by the 2003-birth year that already has players making big impacts in MLS nearly two years out from the U-20 World Cup. In addition to Paredes and Nyeman, there is also Clark of the New York Red Bulls, Justin Che and Ricardo Pepi of FC Dallas, Cade Cowell of San Jose, and Jonathan Gomez of Louisville City (and soon moving to Real Sociedad).

After the recent sales throughout the league, Paredes is proud to be part of this next emerging crop of youngsters in the league and looks forward to playing with them soon on the U-20 team.

“It's special to see these 2003s who are doing great,” Paredes said. “That makes playing so much more fun knowing that I have competition. I think it makes all of us want more. … it's just building up competition, building up numbers. And then when we get that opportunity, I know we're all going to click very well.”