Coach Gregg Berhalter  made seven changes to the starting lineup that mustered a 1-0 win over Haiti and this squad's performance was much easier on the eyes, albeit against an even weaker opponent. The USA's 6-1 win over Martinique was more convincing than its previous clashes with Les Matinino at the Gold Cup -- 2-0 in 2003 and 3-2 in 2017 -- and included some sparkling play. Eagerly awaited is what the USA will look like when it faces a more formidable foe in Canada for Group B's first place on Sunday. The Canadians, who like the USA have already clinched a knockout-stage spot, beat both Martinique and Haiti 4-1. 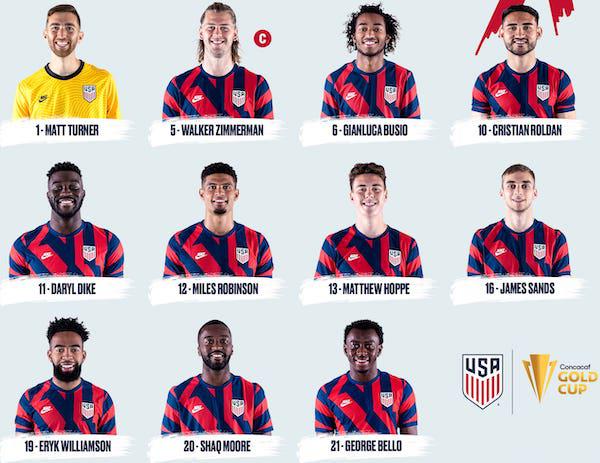 The last of Matt Turner's four saves, in the second minute of stoppage time, had a relatively high degree of difficulty.

Central defender Walker Zimmerman led a backline that took advantage of the opponent's fleeting forward movement by aiding the U.S. attack throughout the game. Not just the outside backs attacked, but Zimmerman's precise pass to Daryl Dike started the foray for the USA's second goal. James Sands, who interfered swiftly with Martinque's first counterattack, won a tackle in the 30th minute and brought the ball into its half to create a U.S. chance. Miles Robinson headed home the fourth goal.

Gianluca Busio ensured U.S. dominance from the get-go by always being open to receive passes from the back line, and passing well to the frontline. He also helped set up the first two goals, the first with pass and the second with a shot off the crossbar. He directly assisted on the sixth goal. Eryk Williamson, who also helped make connections between the backs and the strikers, hit the fine cross that Miles Robinson headed home for the third goal. George Bello bungled when he got the ball in scoring position early and late in the first half, but he was also part of the buildup on both first-half goals. Shaq Moore hit a nice cross in the 4th minute and combined well with Cristian Roldan on the right wing.

Cristian Roldan's consistently good and sometimes clever passes played a major role for the USA. They included directly setting up goals by Dike and Gyasi Zardes, the pass to Matthew Hoppe on the 2-0 sequence, and others that kept Martinique on its heels. Daryl Dike nearly got a hat trick but the USA's second goal, from his header, was relayed into the net by Samuel Camille and adjudged an own goal. Hoppe impressed by shedding markers to receive passes, even if it meant retreating into the midfield. But he was also near the goal when needed. After he misplayed a ball that promised a close-range shot, it bounced back to him after Bello's tackle and Hoppe's slick back-heel pass set up Busio's shot onto crossbar that led to the 2-0. Hoppe also assisted on the opening goal with sharply hit cross to Dike.

Kellyn Acosta's foolish foul gifted Martinique the penalty kick that ruined the shutout and gives Canada the goal difference edge (on goals scored) that will determine the group winner if USA-Canada ends in a tie. Gyasi Zardes scored with a fierce low shot and helped set up the close-range shot that Nicholas Gioacchini banged into the goalkeeper's leg. Gioacchini made no mistake when he had another close-range chance thanks to Busio's pass in the 90th minute.

TRIVIA: As an overseas department of France, Martinique isn't a FIFA country and can't take part in World Cup qualifying, although Concacaf recognizes it as member of its confederation. The Caribbean island, slightly smaller than New York City, has a population of 375,000. Martinque is part of the European Union and its currency is the Euro.