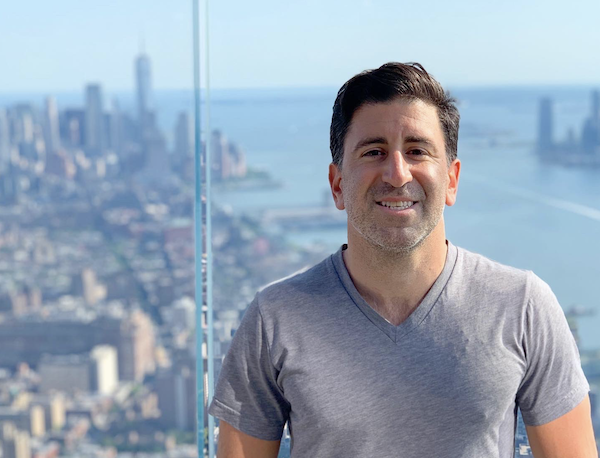 The extraordinary range of Alecko Eskandarian’s soccer experiences dates back the old NASL -- his father played for the Cosmos – and includes college ball, winning an MLS Cup, serving as an MLS club’s youth technical director, and coaching in the new NASL. “Among my earliest memories is sitting on my mom’s lap watching my dad’s Cosmos team play,” says the 39-year-old Eskandarian, who is now MLS’s Director of Player Relations/Player Development. The launch of MLS Next, which last month concluded its first season with playoffs and a showcase in Frisco, Texas, added another dimension to his job. We spoke to Eskandarian about MLS's youth movement and a childhood that included kicking around with World Cup stars and meeting future U.S. stars while working his first job, at his father's soccer supply shop.

SOOCER AMERICA: Describe your job for us in a nutshell.

ALECKO ESKANDARIAN: I currently work in two departments: player relations and player development, so it stretches across a lot of different layers. Everything from working with clubs at the first-team level -- compliance, building out rosters, salary caps and budgets -- all the way down to the academy level to MLS Next, scouting and focusing on the next generation of homegrown players coming up. And there’s a whole lot in between.

SA: When on April 15, 2020, U.S. Soccer announced it was shutting down the Development Academy, which it launched in 2007, MLS stepped in promptly.

ALECKO ESKANDARIAN: It was surprising. MLS kind of adopted it. But it was probably in the cards for MLS to have a bigger presence in youth soccer, because there has been huge investment by our owners and clubs in the youth game and in producing players.

SA: It was a quick launch, amid the pandemic. What did you think about how the first season went and what’s your focus?

ALECKO ESKANDARIAN: It was a huge responsibility with limited staff at that time. But with the cooperation of all our clubs, I think we did a fantastic job piecing it together and working through all the different protocols – different in various parts of the country. There was a ton of work, but we all chipped in and got it done. We learned a lot this last year. There are so many positives, but I think there's always room for improvement. So we're excited about having a full schedule, getting back to some normalcy. As we know, soccer is always evolving around the world, so we have to stay up with the times and try to grow with it.

My focus is on the top prospects all around the country, from all the clubs -- both MLS and non-MLS -- try to identify these top players, see that they're in the right environment, and make sure they’re seen. 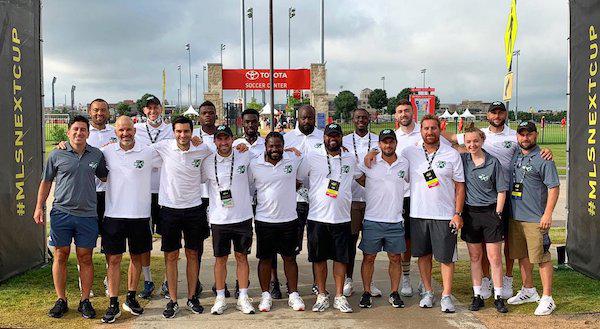 SA: In 2007, MLS mandated that its clubs fund youth programs and in 2008 created the Homegrown Player Rule. Now a significant number of MLS youth products are breaking into first teams, and being sold abroad. Do you sense that MLS owners are satisfied with how their investment in youth programs is paying off and that made them amenable to the league taking on the running the MLS Next youth league?

ALECKO ESKANDARIAN: I'd say we're never satisfied in terms of always wanting to improve and knowing we are fairly new to this side of the game compared to the rest of the world. I think it's been gradual steps, gradual improvements, but the progress is very obvious to see when you look at the different environments around the country now that MLS clubs have provided. It's night and day from when I was coming up, when I was playing -- and even compared to when I was youth technical director of the Philadelphia Union [2011-12] and we launched from scratch -- how much the academy side has grown, how the investment has grown.

I think you see it in the product, with so many homegrown players in the league. More young players are getting the opportunity to play and develop and in turn are getting looks with the national team. Obviously there's great foreign interest as well.

SA: It does seem that guys like Christian Pulisic, Gio Reyna and Weston McKennie might be outliers and the bigger pipeline for young players to Europe goes through MLS first teams. That said, McKennie was part of the FC Dallas academy from age 11 to 18 …

ALECKO ESKANDARIAN: I personally spent three years watching Gio Reyna play at NYCFC’s academy, so I consider him somewhat MLS developed. … I think we have a pretty good sample size that shows that if you play in MLS and find success, that it does translate over to success to in Europe. In some cases, with some of the world’s top clubs. Look at Alphonso Davies, Tyler Adams and a whole bunch of other guys whose careers started in MLS.

SA: Is there concern about MLS losing too much young talent to Europe, or does MLS figure those players will eventually come back to MLS, or there will be always be more young talent to replace them?

ALECKO ESKANDARIAN: We at MLS want to provide these players the opportunity to be the best they can be. It's a truly case by case with these kids. A big thing too is different stages of development. There are some very good players who go to the wrong environment in Europe and it doesn't work out. It doesn't mean that you're not ready or that you failed. It just may not have been the right place or the right time. What you don't want is that the kid does well here, goes there, and finds himself on the bench. When a player goes from MLS to Europe and succeeds, that's really positive for our league and the players.

SA: One controversial aspect of MLS’s feeder system is the homegrown territory rule, which gives clubs rights to players in their “home markets.” What’s the future of the territory rule?

ALECKO ESKANDARIAN: It’s always been meant to be an ongoing conversation. This was something that was put in place when the academies began, but it's something that's constantly being revisited amid expansion and clubs sharing territories. There's a great, healthy discussion always being had about it and we will continue to evolve as our landscape changes.

From the February 2003 edition of Soccer America, in which Will Kuhns covered the MLS SuperDraft at which D.C. United made Alecko Eskandarian the No. 1 over all pick after he played three seasons at the University of Virginia. Eskandarian, who played for the USA at the U-20 World Cup alongside the likes of Landon Donovan and DaMarcus Beasley, scored twice in D.C. United's 3-2 MLS Cup 2004 win over Kansas City. His pro career was cut short after seven years because of concussions he suffered. Before joining MLS's front office in 2017, Eskandarian served as Giovanni Savarese's assistant with the reincarnated Cosmos, who won three new NASL titles, after serving the Philadelphia Union's youth technical director. 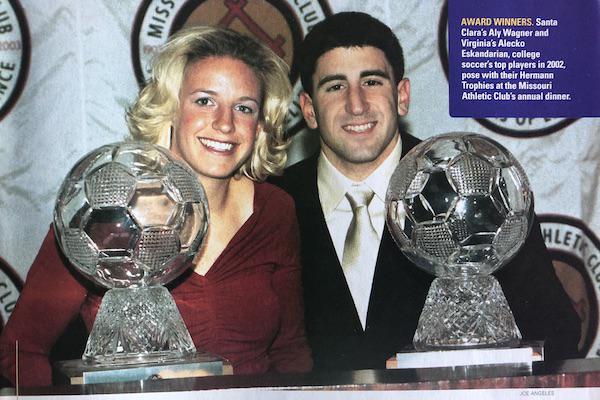 In college ball, Eskandarian broke the UVA freshman scoring record that his coach George Gelnovatch had held with 16 strikes. He scored 50 goals in three seasons at UVA and won the MAC Hermann Trophy, the same year as Santa Clara's Aly Wagner.

SA: The Cosmos were a phenomenal part of American soccer history. What do you recall about your dad and the Cosmos and how much they were part of your earliest soccer memories?

ALECKO ESKANDARIAN: My first memories as a child is always having the ball at my feet, kicking around, playing with my brother, who's three years older. Among my earliest memories is sitting on my mom’s lap watching my dad’s Cosmos team play. And being in the Cosmos locker room as soon as I got old enough to start walking. I remember kicking the ball in the locker with players like Johan Neeskens and Giorgio Chinaglia. The other day, my dad and I were talking about me passing the ball around with Carlos Alberto. After he retired, he still came to games and hung out in the locker room. And Giorgio, he stayed on top of my game even after I went pro.

ALECKO ESKANDARIAN: They used to have Cosmos reunions every year and I always tried make it and go with my parents. Giorgio told my dad, "I need 30 minutes with your son. Because I'm watching him play and I want to talk him about the way he's playing.

SA: What did Giorgio tell you?

ALECKO ESKANDARIAN: He'd say, "You defend too much. And you run too much for your teammates. You've got to score goals! Scoring goals is most important." 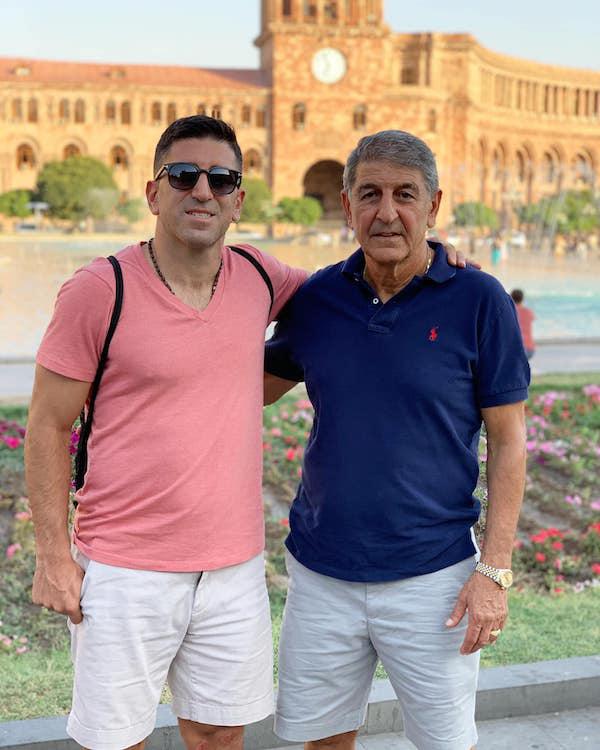 Andranik Eskandarian, of Armenian descent, was born in Tehran, Iran, in 1951. He started for Iran in its first World Cup appearance, in 1978 in Argentina, and afterward joined the New York Cosmos, for which he played six NASL seasons and one indoor season. He played indoor through 1987, with the New York Express, by which time he was running soccer shops -- Birkenmeier Sports Shop and Eski Sports Shop -- with German Cosmos teammate Hubert Birkenmeier.

SA: You're dad was a defender but you ended up a forward ...

ALECKO ESKANDARIAN: It worked out pretty good. My dad was defender and naturally I needed someone to play against. My old brother was also a defender. I think I've always been just a little but different. Ever since I was a kid, I just loved scoring goals, the responsibility of scoring goals, and the feeling after scoring goals. Growing up with defenders, I learned at a very young age what defenders hate.

SA: Another example of how steeped you were in soccer culture was that you worked at your dad's New Jersey soccer store, right?

ALECKO ESKANDARIAN: Yeah, that was my first job growing up. I basically lived there. Whenever I got done with school, and my mom would pick us up, we'd go to the shop and then spend the rest of the day there before we went home. Hubert Birkenmeier [Andranik's business partner] was obviously also another huge influence on my life, very much a second father. So I also had a goalkeeper to shoot on.

SA: I read that lots of kids who would become famous would come to the store. ...

ALECKO ESKANDARIAN: Every soccer player that came out of Jersey would go to my dad's shop. It's the premier soccer shop in New Jersey, and especially in those days there weren't a lot places to get your soccer stuff. A lot of them remember me as the little kid kicking around breaking shelves. John Harkes, Tab Ramos, Tony Meola, Claudio Reyna -- all those guys came to the store when they were coming up. One of the other jobs I had was refereeing indoor, and I remember refereeing Giuseppi Rossi's games.

SA: The pathway to MLS pro has changed significantly since you made it to MLS -- at age 20 after three seasons of college ball. In 2021 alone, MLS clubs signed more than 40 teenagers, including many below voting age, to homegrown contracts. Do you ever think about the differences and similarities between kids today and when you were in their shoes?

ALECKO ESKANDARIAN: For sure. In today's landscape, given how many eyeballs we have out there, today, it's much less likely for a promising young player to fly under the radar. They get spotted earlier and play at a higher level earlier.

The younger it goes, the higher risk. The pressure can be tough. Especially if they don't have the right support system around them. But while going younger is higher risk, it’s also higher reward.