Shaq Moore hit the net 20 seconds after kickoff and the USA held on for a 1-0 win over Canada that earned it a first-place finish in Group B. On the plus side, 21-year-old James Sands ran a defense that generally remained composed amid the Canadians' attacking waves. Concerning was the evaporation the USA's offense after its thrilling start. It managed one shot in the second half. 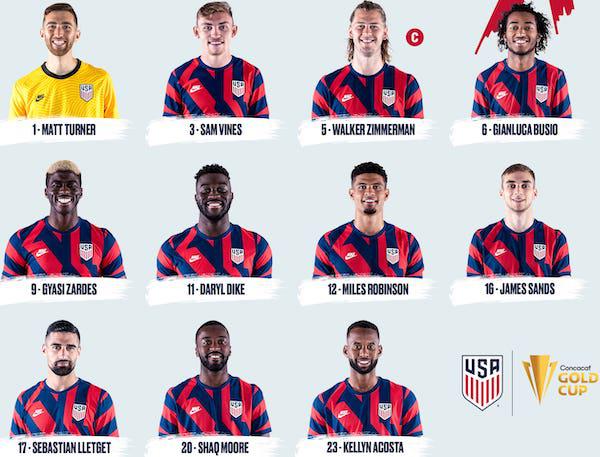 Matt Turner passed the easy tests -- saves on a couple weak long-range shots, played well with his feet on a backpass under pressure when a error could have been easily punished -- and he positioned himself smartly on Canada's best chance. Tajon Buchanan got ball at the edge of the goal area but Turner gave him no space and blocked the shot with his leg.

Walker Zimmerman left injured in the 15th minute, replaced by Donovan Pines. In only his second U.S. start, James Sands delivered a man of the match performance. Early in the game, when the USA managed some streaks of possession, Sands' ability to evade the first challenger enabled him to find the most effective pass and he even won tackles in the Canadian half. When the Canadians took control of the midfield, Sands intercepted passes and blocked a couple shots, including a promising first-half effort by Jonathan Osorio. His ability to win balls without committing a foul was valuable during a game in which a Canadian PK looked likely at some point. Miles Robinson headed clear Canadian crosses and long balls. His successful tackles included robbing Ayo Akinola on a threatening first-half counterattack.

Kellyn Acosta fended off two challenges and sent the ball to Sebastian Lletget to assist on Shaq Moore's goal. Not long after the brilliant beginning, the U.S. midfield pretty much called it a day on combining offensively. It wasn't all dismal. In the 19-year-old Gianluca Busio's second start, he hit some impressive passes early in the game before he and his teammates went into survival mode. Lletget was strong on the ball when he got it, but lacked the speed to break through when without teammates nearby. Sam Vines delivered the most promising ball of the second half but like his midfield mates was mostly preoccupied with defending, which he did successfully on the flank in front of the three-man backline.

Both forwards deserve some credit for keeping the Canadian backline occupied enough to prevent them from adding numbers to their attack. Daryl Dike's two shots went wide from long range. Gyasi Zardes impressed in the first half when he managed to keep possession amid a crowd of Canadians and nearly created a chance. But that was an exception as neither succeeded much at the formidable challenge of holding the ball while outnumbered. They also failed to be close enough to each other to combine as a pair.

Donovan Pines showed no nervousness for the rest of the first half after being call into to action on the backline in the 15th minute  But at the start of the second, he made an ill-advised pass back into into the middle and was lucky that Cyle Larin shot weakly. And he was fortunate that ref Adonai Escobedo ignored his pushing over Richie Laryea in the penalty area in the 50th minute. Pines recovered with a successful tackle after misplaying a throw-in in the 59th minute. In all, despite the flaws, Pines' handling of the emergency arrival to replace Zimmerman was a key to the victory. Reggie Cannon had an open shot from 15 yards out -- the USA's only second-half chance -- after a delivery from Vines, and despite no pressure, managed to shank it sideways. Cannon did respond with two good defensive plays immediately after his miss. Neither Jackson Yueill nor Cristian Roldan managed to bring order to the U.S. midfield. Forward Matthew Hoppe won a ball near the USA's penalty area and a couple of his attacks disrupted the flow of Canada's comeback attempts. He was fouled in the 81st minute. Ref Escobedo didn't show Osorio the yellow card he obviously deserved -- but the break in play benefited the USA as the minutes ticked away. While none of the second-half subs played brilliantly, Coach Gregg Berhalter sending in a fresh trio into the game in the 75th minute did make Canada's challenge more difficult.