NASL Memories: The fan who caught Pele the night that soccer came of age

Sometimes the rewards from writing a soccer book only come years after it's been published. I don't mean in the form of belated royalty checks (though they would be nice), but in the emails out of the blue that express a thank you or an appreciation. One such message reached me a few weeks ago, relating to a particular game recounted in Rock 'n' Roll Soccer, my history-cum-analysis of the North American Soccer League. The chapter in question, 'Hot Property Getting Mobbed,' pinpoints an annulled NASL regular-season game between the Boston Minutemen and the New York Cosmos at Nickerson Field in 1975 as the night when U.S. soccer came of age. In short, it was Pelé vs. Eusebio.

Arguably the two greatest players of the 1960s had last met in a competitive game during the 1966 World Cup in England, when Eusebio's Portugal had beaten a limping Pelé's Brazil by three goals to one, knocking them out of the tournament at the group stage. As I wrote in Rock 'n' Roll Soccer: "When you look at the stature, the quality and the prolific histories of these two players, it seems borderline surreal that their next meaningful encounter should take place in the NASL, a full nine years after that World Cup game in northern England. Maybe this was why the League itself failed to realize the significance of the match. The great moments of American sporting history, after all, were rarely made on a midweek night in early summer in a Massachusetts college stadium."

Although this was Pelé's first away game with the Cosmos, there were no TV cameras at the 12,500-capacity venue. The Minutemen's previous home crowd had been 2,104, against Seattle. Since then, Eusebio had been signed on a $1,000-per-game contract, but this had not triggered a rise in season ticket sales, despite a sizable local Portuguese community. Clearly, no one expected a big crowd for this matchup, so security was almost non-existent. On the night, though, a crowd estimated at between 18,000 and 25,000 showed up and was crammed into the stadium, with spectators unable to find seats standing several rows deep along the sidelines.

When Eusebio scored the game's first goal with 12 minutes to play, there was a field invasion by some fans, but this was nothing compared to the numbers running on to the field when Pelé equalized a minute after play resumed (a goal subsequently disallowed). Fans tried to grab a souvenir -- meaning any part of Pelé's uniform -- and only the protection of his own players and, eventually, his bodyguards, prevented him from a more serious injury than the one he sustained.

"What resulted last night was a chaotic and nearly tragic nightmare that never would have happened anywhere the game of soccer is taken seriously," the Boston Globe wrote in its game report the following day. Cosmos player Joey Fink, who was on the field that night, said that the crowd wasn't hostile, just exuberant. This impression is confirmed by Paul Charles, the man whose son Jon contacted me to ask if I wanted to hear his dad's impressions of the game that night as a spectator. We hooked up by Zoom a couple of weeks later.

Paul Charles was a soccer player and enthusiast at that time attending and playing for Barrington College, Rhode Island. He went to the game with his father and younger brother, delighted at the opportunity to see Pelé, whose Pepsi film "The Master and his Method" (script by Paul Gardner) had taught him the skills of the game two years earlier when he was on a soccer camp while still at high school.

"We got to Nickerson Field early, we parked and got seats in the stand," he recalls, "and people just kept coming in and coming in. So, first of all there was no room in the stand. We were about 20 rows up on the larger stadium side, and the stand across the way was filled up, and then people were just lining up all around the field. As the game started, the announcer said the spectators needed to stay off the field because they were right on the touchline, all the way around -- six or seven deep, like your book says. The announcer says, 'If you're on the field you will be persecuted!' Everybody in the stands was laughing and shouting out things like, 'Don't go on the field or you'll be thrown to the lions!' And then there's a second announcement about five minutes later, 'You need to stay off the field or you will be persecuted!' Everyone was shouting out, 'Crucify them!'

"Meanwhile, the linesman could not run up and down the touchline because the spectators were right up to the edge. And I kept thinking -- there's no security! Your book says there were 14 security officers, maybe that's true, but I think I counted eight or 10. Either way, there were not enough stewards to keep the fans off the field. So the third time the announcement comes, another five minutes later, 'If you're on the field you will be prosecuted!' So he finally got the word right, which caused even greater laughter."

Charles remembers how Pelé took a shot from distance, that the referee disallowed the goal, but that the spectators on the touchline were already rushing the player. "They right away trapped him, but it wasn't mean," he says. "They were trying to rip his short and his shoes off, and there was no security. So his teammates rushed towards him and made a circle around him and they were doing the whole range of martial arts to protect him -- grabbing, karate-kicking, punching, throwing people off him after grabbing them by the hair. Then they brought a stretcher out, put Pelé on the stretcher and took him off, and then they resumed the game." Which finished in a 2-1 overtime win for the Minutemen, but the Cosmos appealed the result because of the field invasion, and the game was annulled. Later in the season, Boston won the rematch 5-0. Both Pelé and Eusebio were out injured. Gate: 4,445. 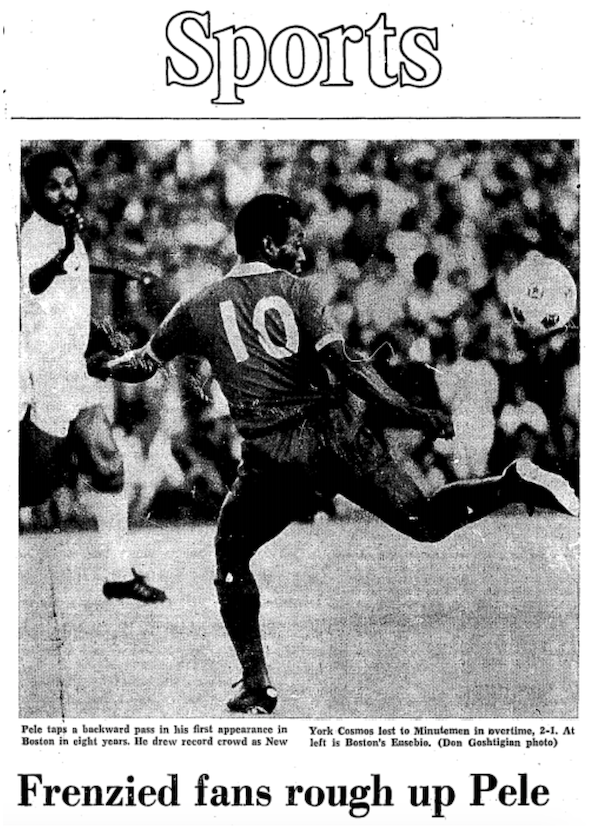 Back to the original game. After Wolfgang Sühnholz had won the game for Boston with a sudden-death winner in the 100th minute, the Charles family waited for the crowds to clear and went down to field level. There they played an impromptu pickup game with a kid who had a soccer ball "until they turned the lights off on us. There was no security, no announcement, they just turned the lights off! We were walking out the stadium and, now, we didn't have a lot of money, so it was a big deal for us to go to a game in Boston. And we didn't have spare money to buy a game program, but there was one lying there left behind on a bench, so I picked it up on the way out, heading towards our car."

The trio walked past the locker rooms, out on to the street, and there was the Cosmos team bus. "There was hardly anyone around," says Charles, "and we looked to our right at the locker room door, and Pelé walked out. He's limping, kind of dragging his leg -- I think in the riot, someone had stomped on his thigh. He had a man on either side of him. Pelé kind of limped and walked around to the bus door and we're going, It's him! There he is, the most famous athlete in the whole world, the guy from the video I learned so much from, right here.

"We followed him to the bus, and then this lady came with a bunch of roses, she stepped in front of us -- she wanted to go on the bus and give them to Pelé, but they wouldn't let her on. So she walked -- and we followed her -- around to the side of the bus where Pelé was sitting, and he slid the window open. She handed the dozen roses to him and said, 'Pelé!' And he blew her a kiss and said 'Love.' So I grabbed the program, opened it up to the roster page, and I handed it up and said, 'Pelé, please.' He signed it 'Edson Pelé.' He asked my brother if he wanted one too, but my brother just shrugged and said it was OK because I already had one." Charles laughs as he recalls how his younger sibling later came to regret turning down the player's offer.

As our call comes to an end, he proudly holds up the framed program with its authenticated signature, saying that its value lies not just in the personal memory of a great night out, but in the fact that the Brazilian later shortened his autograph from 'Edson Pelé' to just 'Pelé.' "Nobody else got an autograph [that night]," he says. "I have the autograph, on the roster page, on the night that soccer changed America. Because from then on, they started packing out stadiums wherever Pelé went. Soccer changed that night."

He came across Rock 'n' Roll Soccer in his library one day, "and there it is, a whole chapter on the game -- so thank you!" I'll leave the final words in this story, though, to the Boston Globe's John Powers, who wrote in his game report that the anticipated confrontation between the two players "never really came off. Age has transformed them from deities to choreographers. They prowl the midfield now, pointing and directing, teaching and cajoling." Beautiful prose to describe a most important night in U.S. soccer history. Albeit one that officially never took place.