Kyle Martino sets new goals -- from the ground up 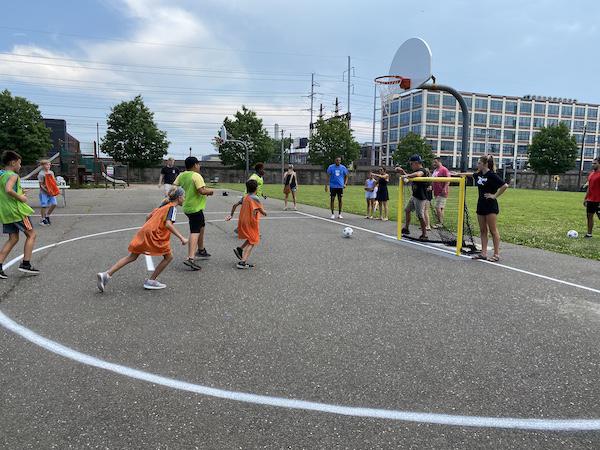 It took Kyle Martino  a week to move from a dejected, defeated U.S. Soccer presidential candidate to an excited entrepreneur, ready to put his ideas into action.

Looking back, the former MLS pro and U.S. national team member says his loss in the 2018 race was the best thing that could have happened. Rather than working to improve American soccer from the top down, he got in at the grassroots level. Last weekend, on an urban basketball court-turned-soccer field, he unveiled the result of that three-year effort.

A cluster of soccer club coaches and players, and a few city officials, watched at Cesar Batalla School in Bridgeport, Connecticut, as Martino pulled two small, recessed goals from underneath basketball hoops. The real payoff came moments later, when a group of boys and girls raced onto the court to play soccer. Some had never kicked a ball before.

The goals -- easy to pull out, set up and then lower back down -- transform any under-utilized basketball court into a multi-purpose field. Soccer, street hockey, handball: If there’s a ball and a net, kids can play.

Martino’s goals – the in-ground ones, and his vision – are part of his Over Under Initiative. The non-profit (“a health and wellness mission with a game-changing solution”) was not what the Connecticut native had in mind when he stepped away from his NBC Sports analyst job to run for U.S. Soccer president. At the time, his focus was more on moving U.S. Soccer forward, to eventually win the men’s World Cup. He talked about the need to change our nation’s soccer culture, and build the game from the ground up. But that was in the context of our men’s team failures at the global level. 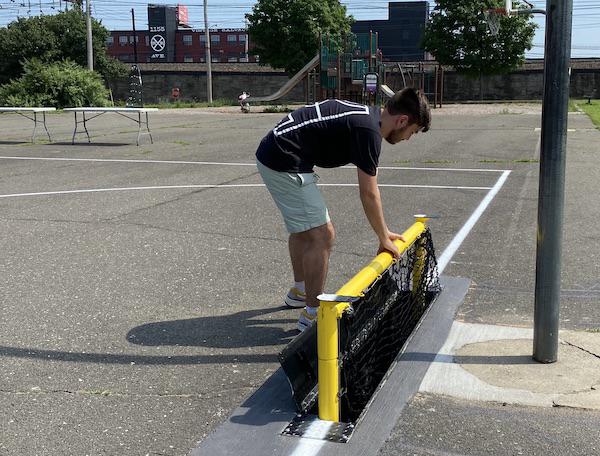 “Like any athlete, I learn more from a loss than a win,” Martino says, of his defeat by now-departed Carlos Cordeiro. “After I stopped blaming other people for my defeat, I realized I didn’t want to lose the energy we had created in the campaign. The same voices that encouraged me to run said, ‘Why not do all the things now that you said you’d do if you won?’”

During the election, Martino says, “I wasn’t the smartest person in the room, by a long shot. I realized I hadn’t tapped into the entire pyramid: professional, college, club, high school, recreational.”

As he spoke with stakeholders -- state association presidents, stars like Mia Hamm and Claudio Reyna, the head of the American Outlaws supporters group -- he understood that to improve soccer in this country, the focus had to flip. “It’s not trickle-down from the top of the pyramid,” Martino explains. “It’s pushing up, starting at the bottom.”

Talking with organizations like Street Soccer USA, Soccer in the Streets and the Aspen Institute, he saw that the biggest problem was not whether the USA qualifies for the World Cup. It’s “the lack of access to sports.” Offering opportunities to underserved children will help their health and quality of life. That, in turn, could impact the growth and success of soccer in this country, Martino says.

He acknowledges his good fortune of growing up in affluent Westport, Connecticut, and playing for a well-established club like Beachside. Less than 10 miles away in Bridgeport -- one of the poorest cities in the nation -- youngsters had no place to play soccer.

A meeting with National Basketball Association commissioner Adam Silver convinced him he could. “He’s very progressive. He’s taken a great brand, and used it for social justice purposes. He said, ‘go for it!’” Martino says.

A marketing executive told him, “If you want soccer goals on basketball courts, you better make them disappear.” He thought about other items that vanish: rolling luggage handles, the Murphy bed in his first apartment. He sat up one night until 4 a.m., designing a goal that could disappear.

Most sports equipment companies rejected the idea. John Moynihan of Keeper Goals in Wisconsin told Martino he was crazy. But he offered to help. 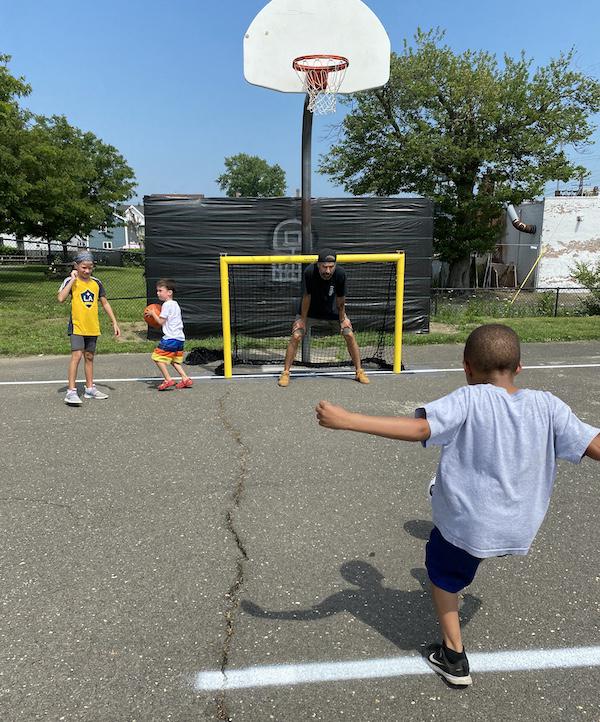 Manufacturing a prototype was difficult. Harder still was convincing municipal officials that the idea -- goals with nets that a child could pull out of the ground in less than a minute, then retract just as easily -- was sensible, safe, and liability-proof.

Bridgeport superintendent of schools Michael Testani was an important champion of the idea. “He didn’t say ‘we can’t,’” Martino recalls. “He said, ‘where and how?’”

Last weekend’s ceremony was emotional for Martino. It took place a few miles from where he grew up. Beachside Soccer Club founder Mickey Kydes -- one of Martino’s mentors -- was there. The club was an early sponsor of the project.

“This took ambition, love and luck. To do it right down the street from where I fell in love with the game, with people who were there for me from the beginning, made it extra special,” Martino says.

One court in Bridgeport won’t change the trajectory of soccer in the United States. But more are in the works, including New York, Nashville, Atlanta, Anderson, South Carolina, Columbus, Chicago, San Francisco and Los Angeles.

“People ask how they can help,” Martino says. “They can contribute to the Over Under Initiative. Or they can ask their mayor or school superintendent why they don’t have this in their city.”