In its Olympic opener in Tokyo, the USA passed to the Swedes more than to each other, defended lackadaisically, constantly seemed a step slower, and squandered close-range chances in a 3-0 loss. 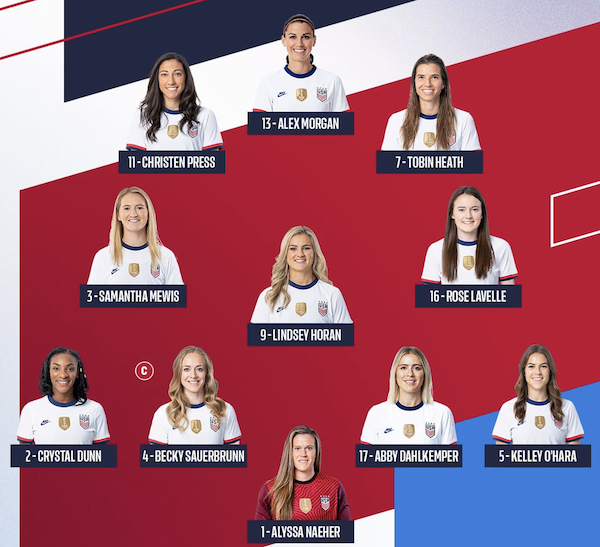 Alyssa Naeher looked insecure on early saves when she batted the ball away instead of holding onto it. She was reluctant to come off her line for crosses -- all three goals came from close-range. She flinched on the second.

Kelley O’Hara hit a cross to the keeper when she finally broke through on the flank late in the first half, after which her long ball set up Rose Lavelle's header onto the post in the 45th minute. But she started second half with a pair of ineffective crosses. Abby Dahlkemper was marking Stina Blackstenius on the Swede's first goal (albeit it was a difficult cross to defend), ball-watched on the second, and lost track of Lina Hurtig on the third. Crystal Dunn's tackle on Sofia Jakobsson prevented a close range-range shot in the 30th minute, her highlight during a first half in which she gave plenty of space to Jakobsson to cross on the Swedes' first goal. Dunn missed a chance to interfere with the buildup on Sweden's third goal. Offensively, Dunn gave up the ball often with misplayed passes. Early on, Becky Sauerbrunn cleared a couple Swedish crosses.

Rose Lavelle hit the post on a close-range header late in the first half. She combined her failure to beat Swedes one-on-one with horrendous passing. Sam Mewis' offensive cameo in the first half ended with a pass to nowhere, and she was subbed at halftime. A clear sign of how dour a day it would be for the USA was the ineffective play of the usually reliable Lindsey Horan, non-existent offensively -- besides a smart pass to Megan Rapinoe with a quick free kick from midfield in the 71st minute -- and defensively unable disrupt the Swedes. Besides the midfield's poor passing, they also looked slower than Swedes.

Alex Morgan headed wide from close-range in the 10th minute, passed to a Swede on her next possession, then disappeared. The center forward was replaced at halftime. Tobin Heath's dribbling skills failed her when she got the ball in penalty area in the first half,  and was subbed after 14 minutes of futility in the second half. Christen Press stayed on the entire game despite her aimless crosses. She hit the post from four yards in the 70th minute with an open net and headed to the keeper while unmarked in stoppage time. The inept play of the frontline served as a reminder that much of the forwards' pre-Olympic success came against low-quality backlines.

When she came on at halftime after an injury break since May, Julie Ertz's first touch was an aimless boot, and she over-hit her next pass that should have been an easy connection to the wing. Her two fouls within a minute late the second half indicated a lack game fitness. Megan Rapinoe tried to beat the keeper in the 69th minute from near the goal line with no angle instead of feeding one of a pair of open teammates. She did better a couple minutes later in a similar situation when she fed Press. But Rapinoe fell short of providing the off-the-bench boost expected from a superstar, as did Carli Lloyd, who had first shot blocked, headed to the keeper, and headed wide on a Tierna Davidson delivery. Davidson also won a tackle in the U.S. penalty area and sent a precise cross in stoppage time to Press.

TRIVIA: The loss ended the USA's 44-game unbeaten streak. Its last loss came in a 3-1 friendly defeat to France in January 2019.