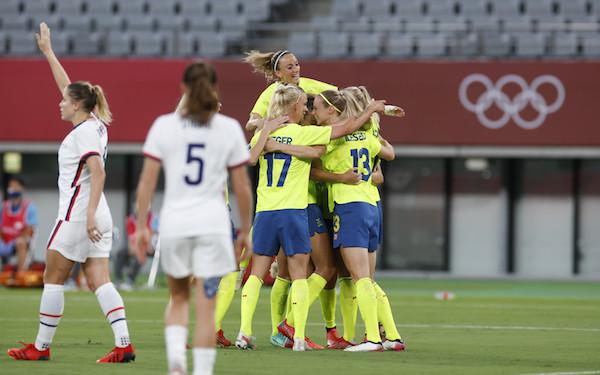 Trying to make sense of the USA's 3-0 loss to Sweden in their opening game begins by understanding just how amazing it was that the Americans have won two consecutive World Cup championships.

The second one, in particular.

Just think back to the run of games in the knockout stage: Spain, France, England and the Netherlands. That's four European teams that all gave the USA close games. And one more European team than is competing in Japan.

One of those three teams, of course, is Sweden, which the USA also faced in France -- for the fifth straight World Cup -- in the third game of group play after both teams were already through to the round of 16.

The USA won the 2019 Women's World Cup with talent, guts and a bit of luck. That included the opportunity to ease into the tournament with games against Thailand and Chile to open group play.

How did we get from a 13-0 win against Thailand to open France 2019 to a 3-0 loss against Sweden to open the Tokyo Olympics? (Both margins of victory could have been a lot more.)

After Wednesday's game, Vlatko Andonovski described the result as "a bit of a shock," but the outcome wasn't exactly a surprise if you saw the USA play in recent months. Five games, five shutout wins. But the USA wasn't particularly sharp in beating a bunch of weak opponents.

The U.S. players hit the same aimless passes, made the same dribbles through no one and had the same poor touches in the warm-up series as they did against Sweden. The only difference was they could always win the ball back easily against its hopeless sparring partners.

If the USA faced a team with a plan and players and purpose, it was clear that it might get torn apart, at least the way it had been playing and it was still constructed.

There was little doubt that Andonovski was going to stick with the veterans: nine starters from the 2019 World Cup final in Lyon in the starting lineup against Sweden, all 11 starters from the Netherlands game in the Sweden game by the hour mark.

The concern was how the USA's aging team -- nine players 30 or older got in Wednesday's game -- would hold up in the heat of Japan and through the brutal schedule (maximum of six games over only 17 days). But the surprise of the opener was just how badly many of the "younger" and usually dependable players played.

There is also a sameness about the U.S. players -- what they do well, what they don't -- that was eventually going to be exploited if they came up against an organized team like the Swedes coached by Peter Gerhardsson.

So many of the issues affecting the USA are related to the pandemic.

In a Covid-free world, the USA could have prepared against better (European) opponents that would have been willing to travel. The Olympics could have not come at a worse time, given the current Covid situation in Japan, leaving athletes stuck in their hotel rooms, "the reality of the tournament," as Kelley O'Hara described it on her call with the U.S. and Swedish media on Monday.

The lack of atmosphere at Tokyo Stadium, where no fans were allowed, certainly didn't help, but the USA looked lifeless against Sweden from the get-go.

Where does it go from here? Things can't get much worse.

The amended roster rules give Andonovski room to make game-to-game changes. But only 18 players get to dress each game. It will be one thing to bench some of the world champions, it will be another thing to banish them to the stands, the same awkward issues coaches faced at Euro 2020, where rosters were expanded from 23 to 26 players but only 23 dressed each game.

The good news is that the USA rarely loses at the Olympics. Sweden is only the second team to ever defeat the USA (the Swedes' shootout win in the 2016 quarterfinals went down as a tie). The USA's two previous Olympic losses were to Norway. The first was in the 2000 gold-medal game.

After Wednesday's loss, U.S. players quickly recalled the run to gold in 2008, which began with the second loss, a 2-0 opening defeat to the Norwegians after a performance almost as bad as the one was against Sweden. (Two defensive errors in the first four minutes cost the USA goals in what we termed the "Nightmare in Qinhuangdao.")

A ray of hope, perhaps, after the nightmare in Tokyo.