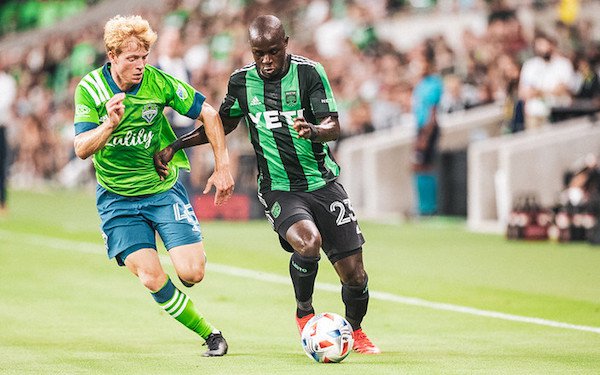 The Seattle Sounders did what no MLS team has ever done and start five teenagers on Thursday night.

They weren't just any teenagers. They included three of the six youngest players who have ever played in the league.

Amazingly, the Sounders won, 1-0. And all five players can say they were still in the game in the 67th minute when their teammate, Peruvian international Raul Ruidiaz, scored one of the greatest goals in Seattle history.

He picked up a ball that deflected off Matt Besler more than 40 yards out and used the Austin FC defender as a screen to curl the ball over Austin FC keeper Brad Stuver and into the goal for his league-leading 11th goal.

The win moved the Sounders back into the lead in the Supporters' Shield race ahead of the New England Revolution.

Josh Atencio (19), Ethan Dobbelaere (18, photo) and Danny Leyva (18) all had previously made MLS starts, but Reed Baker-Whiting (16) had played just one minute with the Sounders, and Obed Vargas (15) had never played in MLS.

Vargas, Alaska's Athlete of the Year at age 13, moved from Anchorage and joined the Sounders academy two years ago. He became the third-youngest player in league history to play after Freddy Adu and Alphonso Davies.

National team call-ups and injuries left Seattle so undermanned that it received permission from MLS to call up Vargas and three other players from its second team, Tacoma Defiance: Samuel Adeniran (22), Alex Villanueva (19) and Juan Alvarez (16). The 6-foot-4 Adeniran, who hails from Houston and previously played in the German and Spanish lower divisions, started at center forward, while Villanueva made his MLS debut off the bench in stoppage time for Baker-Whiting, who had a very good game.