An under-prepared, offensively tame New Zealand provided a convenient foe for the USA's rebound after its 3-0 opening loss to Sweden. Coach Vlatko Andonovski made five changes to the starting lineup. The USA had four goals called back for offside and were gifted two own goals in the 6-1 win. 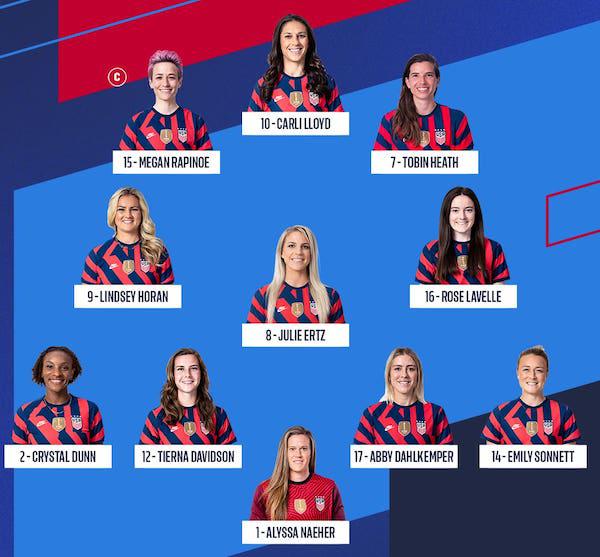 Alyssa Naeher's biggest save came on a low 20-yard shot by Hannah Wilkinson in the 7th minute. Not much Naeher could do when Betsy Hassett hit the net from close range.

Left back Crystal Dunn improved on her performance by opting for simpler passes and she fed plenty of balls to Megan Rapinoe. Emily Sonnett at right back shut down New Zealand's most threatening player, Ali Riley, who faded after her early flank forays. Sonnett combined neatly with Lindsey Horan in the buildup to the third U.S. goal. Abby Dahlkemper, out of sorts against the Swedes, still hasn't found her groove. She misplayed a pass and then stumbled as New Zealand managed a 72nd-minute goal. Tierna Davidson defended reliably and her solid passing included a couple of exceptional cross-field balls.

Rose Lavelle's sharp finish for the early goal ensured an easy day for the USA. New Zealand's midfield was overmatched by the defensive strengths of Lindsey Horan and Julie Ertz and the duo also motored the U.S. attack. Horan got a key touch in on the buildup to Lavelle's goal, headed home shortly before halftime, and sent in the cross ahead of the 3-0 own goal. Ertz assisted on Horan's goal with a headed pass and on Christen Press' goal with a precise cross.

Carli Lloyd nodded on Alyssa Naeher's boot down the middle leading to Tobin Heath's assist on Lavelle's goal. Megan Rapinoe's inconsistent accuracy on crosses and corner kicks made defending easier for New Zealand. But after striking corner kicks short, Rapinoe delivered one across the goal area that Ertz headed to Horan to make it 2-0 shortly before halftime. Lloyd's header from Horan's cross led to the first own goal. For the second straight game, none of the starting forwards scored.

Christen Press scored the best goal of the game, settling Ertz's cross on with her left thigh to set up a half-volley from her right foot from 15 yards into the lower right corner. Press also set up the goal by Alex Morgan, a finish from 9 yards. Sam Mewis' midfield header got the buildup going on the goal by Morgan, who headed Mewis' ball to Press and sprinted to the right spot for the return pass. Mewis also delivered the cross-field pass to Press, whose pass into the goal area C.J. Bott banged int her own net.