The USA earned a semifinal date with Gold Cup guest Qatar thanks to its 1-0 win over Jamaica. Sunday's scrappy affair in Texas went the USA's way thanks to second-half improvement and the first national team goal by 20-year-old Matthew Hoppe. 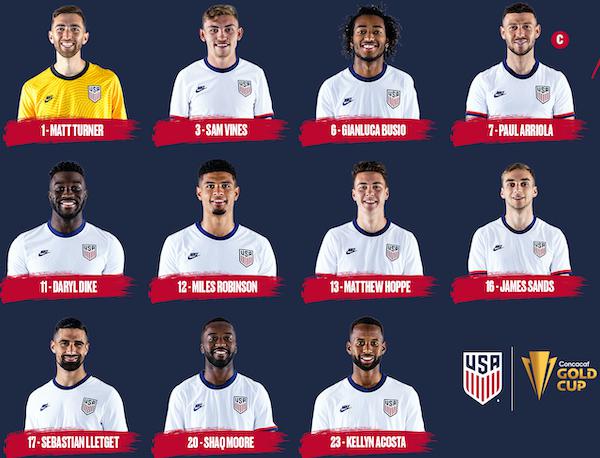 Matt Turner may have been surprised about how weakly Jamaicans shot on their two best opportunities, but his 39th-minute diving save on Junior Flemmings was of the spectacular sort.

Central defenders James Sands and Miles Robinson started with unpunished miscues shortly after kickoff, and then settled in to thwart the Jamaican counterattacks. Robinson's tackle in the 56th minute on Flemmings prevented a close-range shot. The header he won started the buildup on the U.S. goal. Right back Shaq Moore, who defended well, came out strong offensively but passed badly twice in Jamaica's penalty area in the first half. Like many of his teammates, Moore improved in the second half and fed Cristian Roldan on his assist on the game-winning goal. Sam Vines, solid on defense, hit an excellent pass out of the back to Daryl Dikes in the 34th minute that created one the USA's few chances.

Gianluca Busio struggled with the challenge of bringing order to the midfield in a hectic game. Sebastian Lletget was more composed on the ball, but despite the USA's flattering possession stats, it rarely established any rhythm. Kellyn Acosta defended strong in the midfield throughout while flawed offensively in the first half. His passing improved in the second half. Overall, the threat of Jamaican counterattacks seemed to saddle the midfield with defensive concerns that hampered its ability to take charge offensively.

Paul Arriola came back after a two-game injury break, was given the captain's band, and didn't look fit. He lost the ball most of the times he got it before being subbed in the 63rd minute. That's also when Daryl Dike was subbed after an ineffective stint at center forward. His one shot was blocked by a defender. Mathew Hoppe's two volleys from limited angles went straight to goalkeeper Andre Blake. But unlike Dike, Hope constantly made himself available for passes and was by far the player the Jamaicans had the most problems containing. Hoppe capped his toil with the gamewinning goal shortly before he was subbed.

The subs worked out well for Coach Gregg Berhalter thanks to play going on long enough for Hoppe to score before Nicholas Gioacchini could replace him, Cristian Roldan delivering the perfect cross for the U.S. goal and then blocking a Jamaican shot, and Reggie Cannon interfering with a late counterattack. Also, Gyasi Zardes charged about to keep the Jamaican backline occupied and his shot forced a Blake save in the 66th minute.

TRIVIA: The USA's starting lineup had an average age of 23 years, 280 days, and averaged 12 caps.