Olympics: If Australia brings its A game against USA, hold on to your seats 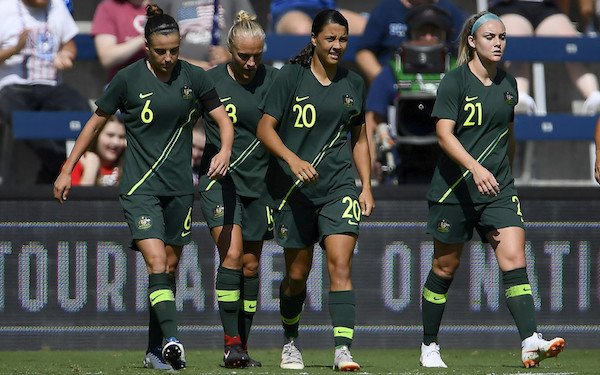 Australia's record against the USA in women's soccer is not a good one:

But that does not tell the whole story about the series that will continue on Tuesday when the USA and Australia meet for the 31st time at the Kashima Soccer Stadium in their final group match of the Tokyo Olympics.

It has the potential to be a dramatic match and set off a wild evening (or morning for those following here) of women's soccer viewing.

Both the USA and Australia split their first two games, beating New Zealand and losing to Sweden. The USA sits in second place ahead of the Matildas, thanks to its better goal difference (6-4 vs. 4-5), and will advance to the quarterfinals with a win or tie on Tuesday.

The most convenient result for both teams would be a draw -- only the craziest of outcomes in the other matches would eliminate the Matildas with four points -- but an Australia victory would drop the USA to third place and force it to wait three and a half hours for the final group matches elsewhere in Japan to end and determine if it holds one of the two best third-place positions. (Only the third-place team with the worst record is eliminated.)

The scenario that would eliminate the USA is:

Possible? Yes. Likely? No. And it begins with an Aussie win in Kashima, about 55 miles north of Tokyo.

What are Australia's chances? Other than Sweden's, its last four results are the best any team at the Olympics have had against the USA:

The Matildas outplayed the USA for a good portion of the 2015 Women's World Cup opener. They handed the USA its last defeat at home -- the streak is now at 58 games! -- at the 2017 Tournament of Nations, which they won. The USA needed a 90th-minute goal from Lindsey Horan to earn a tie a year later. And the three goals the USA conceded in their last meeting were the most it gave up in any game until Sweden's 3-0 win in Tokyo.

The problem is the Matildas' recent form.

Their first post-lockdown matches were 5-2 and 5-0 losses to Germany and the Netherlands in friendlies played in April, and their 2-1 win over New Zealand in Tokyo is their only victory in seven games in 2021. It's been a startling turn of events for a team loaded with talented players and an experienced coach.

Australia has one of the best players in the world in Sam Kerr, who plays for English champion Chelsea. Like Kerr, most of the Matilda stars played in the NWSL before moving to Europe.

Their coach, Swede Tony Gustavsson, knows the USA inside out. He was Jill Ellis' right-hand man at the 2015 and 2019 Women's World Cups. And before that, he was an assistant in 2012 when the USA won its last Olympic gold medal.

"We're a pressing and aggressive team, we're an attacking-minded team," he told the Australian news agency AAP.  "We'll go about [the U.S.] game as being ourselves and hope that we're good enough to beat them -- we know we can if we play our A game."

olympics, women's national team, women's world cup
4 comments about "Olympics: If Australia brings its A game against USA, hold on to your seats".
Read more comments >
Next story loading